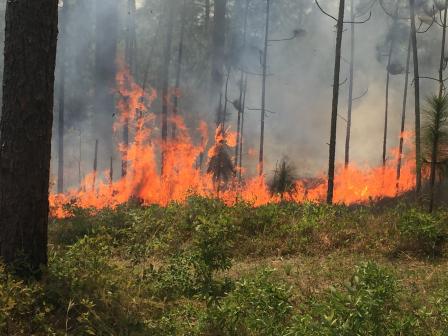 EPA researchers returned to Flint Hills in mid-November to get emissions from prescribed burning of prairie grasslands in the state of Kansas. They used a novel sampling system developed in the lab that was sent aloft with a balloon (aerostat). The research project is addressing ways to conduct prescribed burns of prairies for ecological protection and agricultural purposes, while protecting air quality for those living downwind of the smoke. Last March, researchers took measurements during peak burn season. This second sampling will show if there are any differences in smoke plume emissions from spring to fall. The study will assist the Kansas Department of Health and Environment in refining the BlueSky model to simulate smoke emissions that can assist with development of smoke management plans.

Researchers found that prescribed burning of dry piles of post-harvest Douglas-Fir slash (cut timber and timber debris) exhibited significantly lower emissions than wet piles due to better combustion efficiency, according to a study funded by the Oregon Department of Forestry and the EPA through a Cooperative Research and Development Agreement. Polyethylene sheets (PE) have been used on timber slash piles to prevent moisture exposure. Tests from this study suggest that use of PE as a biomass cover to keep slash piles dry results in lower emission factors than those from piles exposed to moisture, which reduces pollutant levels during prescribed burning. Also, burning the PE cover on the pile was found to have no distinctive effect on emissions. These emission factor data results can be used by management and regulatory communities to inform smoke management practices and limit potential hazards related to prescribed burning of slash piles.

Emissions from prescribed burning of timber slash piles in Oregon Exitpublished in Atmospheric Environment in February 2017.

EPA scientists developed a Community Health Vulnerability Index that can be used to help identify communities at higher health risk from wildland fire smoke. Smoke inhalation is a health threat, especially for people with lung or heart disease, diabetes and high blood pressure.  It is also a concern for older adults and people in communities with poverty, unemployment and other indicators of social stress. State and local governments can use the index in combination with air quality forecasting models to “map” areas where vulnerable populations are at higher risk from poor air quality, including areas prone to wildfires. Health officials can identify where to focus public health strategies to protect individuals living in areas where air quality is impaired, either by wildland fire smoke or other sources of pollution.

For a 2008 peat fire in North Carolina, researchers found that asthma and cardiac events declined after simulating adherence to smoke advisories for exposure to low and intermediate levels of particulate matter. The economic benefit of effective interventions exceeded $1 million in excess hospital visits for asthma and heart failure, $2 million in lost productivity, $100,000 in respiratory conditions in children, and $42 million due to excess mortality.

Forecast-Based Interventions Can Reduce the Health and Economic Burden of Wildfires Exit, published in Environmental Science and Technology on August 25, 2014.

Identification and quantification of brown carbon (BrC) emissions from all measurable sources is important to inform and improve climate and air quality models. Biomass burning is a primary source of brown carbon in the atmosphere. However little is known about (i) the factors that can influence the optical properties of BrC emissions from biomass burning and (ii) the potential BrC contribution from additional anthropogenic sources. A recent study found that fuel type influences the optical properties and concentration of BrC emitted to the atmosphere during biomass burning. In addition, the study showed that motor vehicles are an additional unaccounted for source of atmospheric BrC.

A first-of-its-kind study estimated the health and health care cost impacts of wildland fires in the U.S. between 2008-2012. Researchers found between 5,200 and 8,500 hospital admissions for respiratory problems per year and 1,500-2,500 hospital admissions for cardiovascular problems per year related to exposure to wildland fire smoke. In addition, total deaths per year were estimated between 1,500 and 2,500, with 2008 having the highest rate because of wildland fire-related fine particle pollution (PM2.5). Health care costs for short-term exposures were $63 billion in 2016 dollars and $450 billion in 2016 dollars for long-term exposures.

The Health Impacts and Economic Value of Wildland Fire Episodes in the U.S: 2008-2012Exit, published in Science of the Total Environment on January 1, 2018.