What EPA is Doing in Ambler, Pennsylvania

Our country's most serious, uncontrolled, or abandoned hazardous waste sites can be cleaned using federal money. To be eligible for federal cleanup money, a site must be put on the National Priorities List. 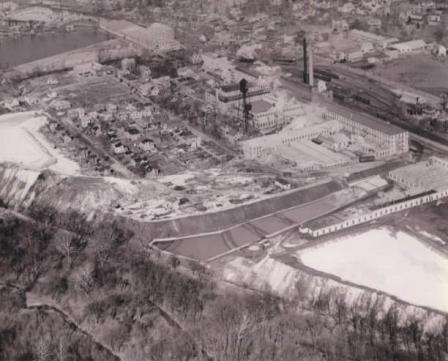 Aerial view of the former Keasbey and Mattison manufacturing facilities and waste disposal areas. (1930s)The Ambler Asbestos Piles Superfund Site was added to the National Priorities List on June 10, 1986. The site is about 25 acres in size and is located near a commercial and residential area. The Wissahickon Creek and its flood plain border the site.

The site is made up of three asbestos-containing waste piles and a series of filter bed lagoons. The total volume of asbestos-contaminated waste in the piles is estimated to exceed 1½ million cubic yards. The asbestos piles were constructed with the deposition of both solid asbestos wastes that were dumped on the surface, and liquid waste slurries that were pumped into constructed cinder berms and allowed to dry. Dumping of asbestos-containing waste on the site  began in the early 1930's and continued until 1974.

The EPA's cleanup of the Ambler Asbestos Piles Superfund Site was completed on August 30, 1993. Human health threats and potential environmental impacts have been minimized, and the site was removed from the National Priorities List, EPA's list of Superfund sites, on December 27, 1996. EPA's most recent assessment of the site, in June 2017, has shown that the site continues to be protective of human health and the environment. Long-term operation and maintenance of the site is ongoing. 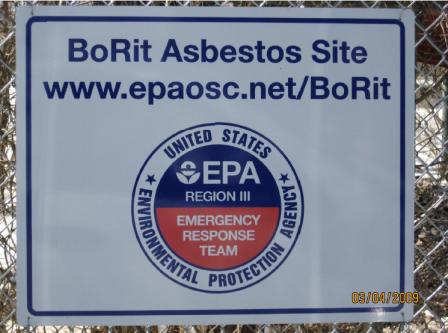 Signage at the BoRit Asbestos Superfund SiteThe BoRit Asbestos Superfund Site was added to EPA's National Priorities List of most hazardous waste sites on April 9, 2009, making it eligible for cleanup using federal Superfund program funding. The site consists of a 6-acre parcel containing a 2.5-acre asbestos waste pile, a 15-acre parcel that contains an 11-acre pond (also known as the reservoir), and an 11-acre former park area. Three water bodies run either through or alongside the park. The BoRit Asbestos Site was used to dispose of asbestos-containing material from the early 1900s to the late 1960s that came from a nearby manufacturing plant.

EPA removed any potential risk from asbestos contamination at the BoRit Asbestos Superfund Site, by covering all asbestos-containing materials throughout the site. All removal cleanup work on the site was completed in 2017. The long-term cleanup investigation is complete, and the long-term cleanup plan(PDF)(82 pp, 6.82 MB, About PDF) was proposed in December 2016.

EPA has reviewed and responded to the public comments received during the 90-day comment period on the proposed long-term cleanup plan.  EPA’s response to all comments and its final decision is available in the Record of Decision (PDF) (233 pp, 4.74 MB, About PDF), which was signed on July 28, 2017.

The Remedial work at the site was completed in 2018 and was documented in the Remedial Action Completion Report (PDF) (819 pp, 46.63 MB, About PDF).  Long-term operation and maintenance of the site is ongoing.