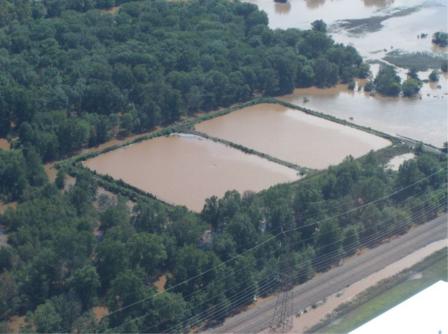 Flooding at the American Cyanamid Superfund Site in 2011.The American Cyanamid Superfund site (Bridgewater Township, New Jersey) is located next to the Raritan River above the Brunswick Aquifer - New Jersey's second largest source for drinking water. The area had been used for manufacturing chemicals and as a disposal site of chemical sludge and other wastes. The site's soil, ground water and waste disposal areas are contaminated with volatile organic compounds (VOCs), semi-VOCs, metals and other harmful chemicals. In 2011, Hurricane Irene dumped seven inches of rainfall in 48 hours and the site flooded. Although there was no major release of contaminants from Hurricane Irene, the flooding caused significant damage to the facility. To anticipate and better prepare for future events, the site owner raised critical infrastructure components to several feet above previous flood events and reinforced the berms surrounding two impoundments to increase their strength and prevent flood-related scour. In addition, a remedy selected by EPA in 2012 required that all future engineered caps be designed and constructed to withstand the effects of a 1-in-500 year flood event, at a minimum.

While the site's operators did not explicitly use climate models to projected vulnerabilities, the actions taken increase resiliency to current flooding threats and adapted the site to better manage risks associated with projected increases in the frequency and intensity of future storms, including flooding. Overall, the site has adapted to climate change by repairing and raising critical areas of the site to handle increased precipitation and flooding threats and reduce threat of contaminant release now and into the future.

Waste sites, such as Superfund and RCRA sites, are at potential risk from the impacts of climate change. Brownfield sites may also be at risk from climate change, for an example of brownfield adaptation see Barre City, VT.