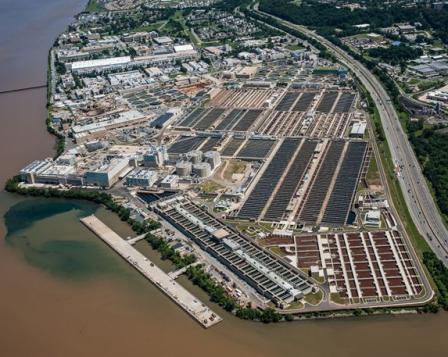 View of Blue Plains Wastewater Facility along the Potomac River.The District of Columbia’s Blue Plains Wastewater Facility in Washington, DC, serves most of the national capital area, including parts of Maryland and Virginia. This facility is vulnerable to flooding because of its location adjacent to the Potomac River. The facility has historically been protected from flooding by a seawall built to withstand a 1-100 year flood. However, understanding that storms may become more frequent and intense, the DC Water and Sewer Authority decided to implement an adaptation action to prepare for more flooding due to climate change. The Blue Plains facility is undergoing a $13 million dollar construction project, expected completion in 2021, to build a 17.2 ft high sea wall that will surpass the recommended 1-500 year storm level by including 3 feet of freeboard to protect against higher river elevation or wave action. Blue Plains has selected this standard as a proxy to adapt the facility to expected higher river elevation and storm surge inundation. This will help protect the facility against higher river levels and storm surges and reduce threats of Clean Water Act violations. Blue Plains took this action to promote resilience to current conditions and adapt to expected climate changes.

Several other communities have adapted to protect their water and wastewater service from flooding and sea level rise. To see how another northeastern community analyzed the impact of sea level rise on a water utility, view Manchester-by-the-Sea. For a community that recognized the prohibitive cost of protecting a highly vulnerable facility and decided to move to a safer facility, see Iowa City. Protecting the Blue Plains facility is only one of several strategies Washington, D.C. has taken to reduce the threat of flooding on the community. To see how Washington, D.C. is using green infrastructure to reduce stormwater impacts and combined sewer overflows view the DC Consent Decree.