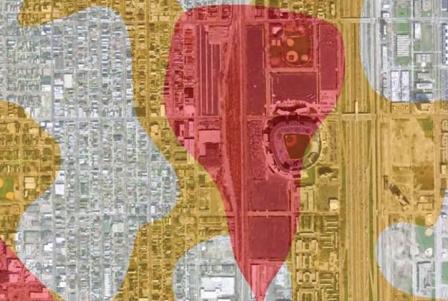 Graphic of projected urban heat island exacerbated by climate change.In 1995, Chicago experienced an extreme heat event that led to the deaths of several hundred people over the course of five days. This event prompted the city to strengthen and update its heat emergency response system. Recognizing that heat waves are expected to increase in Chicago due to climate change,–supported by the Chicago Climate Impacts Report, the city adopted a comprehensive set of actions to reduce deaths from extreme heat events.

Chicago’s approach focuses on community preparedness with particular attention to vulnerable populations. Since effective public outreach is a time and resource intensive process, Chicago worked with the Field Museum, a world-renowned museum and a leader in science education and engagement, to develop an outreach program that targeted neighborhoods vulnerable to climate change. This partnership engaged the local community to increase awareness of neighborhood vulnerability and identify how residents could reduce the impact of climate exacerbated extreme heat events. This outreach effort has worked to complement traditional disaster response actions that Chicago promoted after the 1995 heat wave.