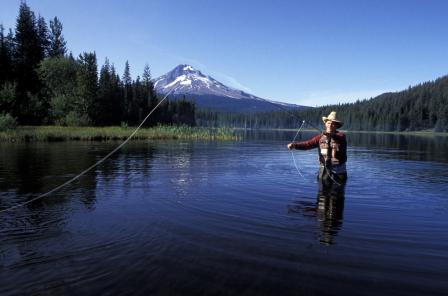 EPA works with local, state and tribal governments to protect the ecosystems and environmental systems that support freshwater habitat for fisheries. EPA has a particular role in protecting and maintaining water quality including working to meet the Clean Water Act’s national goal of “…water quality which provides for the protection and propagation of fish, shellfish, and wildlife, and recreation in and on the water, wherever attainable.”

Most freshwater fish species can only survive in certain water temperature ranges or stream flow conditions. Climate change can threaten such aquatic ecosystems by altering these conditions including increasing stream temperature (which causes a corresponding decrease in oxygen levels), altering stream flow due to drought or increased storms, and worsening other stressors (e.g., increased storm runoff including nutrients, pollutants, and sediment) that can affect ecosystem health. 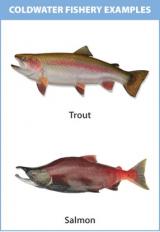 Climate change threatens to disrupt the habitat and recovery and protection of some coldwater fish species, such as trout and salmon. More broadly, cold and cool water fish may be replaced by other species better adapted to warmer water which can allow non-native and/or invasive species to become established, as in the Great Lakes region.

The effects on these, as well as other fish species and aquatic life, have the potential for significantly affecting traditional subsistence fishing communities.

Warmer air and water temperatures may also expand the ranges of current invasive species, or allow new ones to establish. Invasive species can pose challenges to the success of ecosystem protection efforts ranging from large ecosystem management, such as the Great Lakes, to the restoration of coastal estuaries.

Explore More About Adaptation and Change in Fish Species