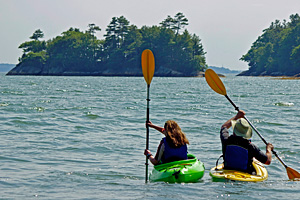 EPA works with local, state and federal governments as well as the 28 National Estuary Programs to improve and maintain the waters, habitats and living resources of estuaries across the country. An estuary is a partially enclosed, coastal water body where freshwater from rivers and streams mixes with salt water from the ocean.

Increased frequency and intensity of rainfall can lead to greater stormwater runoff, erosion, and sedimentation. Greater nutrient, pollution or sediment introduction in an estuary can threaten estuarine ecosystem function.

The rising concentration of carbon dioxide (CO2), and subsequent absorption in the ocean, leads to marine waters becoming more acidic. Increased acidity of ocean and coastal waters can threaten to reduce the availability of certain minerals in seawater that are needed to build and maintain coral skeletons and support other estuarine species such as shellfish. Ocean acidification in combination with other stressors can lead to greater coral reef die-off and threaten aquatic life, threatening the success of coastal estuary programs. For more on Ocean Acidification see the EPA’s Ocean Acidity webpage.

Explore More About Adaptation and Estuaries