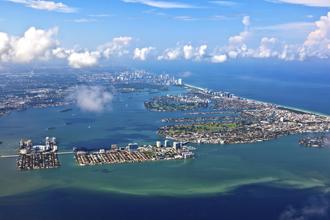 EPA supports the development and maintenance of water utility infrastructure across the country. Included in this effort is helping the nation’s water utilities anticipate, plan for, and adapt to risks from flooding, sea level rise, and storm surge.

Climate change is causing sea levels to rise more rapidly across the country. The risk of sea level rise to coastal water utility infrastructure varies based upon the rate of sea level rise relative to land elevation in a particular location. Where relative sea level rise occurs, it amplifies near-term vulnerability to storm surge and increases long-term flood and inundation risk.

Rising sea levels amplify the threat and magnitude of storm surges in coastal areas. Water infrastructure, often located along the coast or tidally-influenced water bodies, can be vulnerable to greater changes in storm surge intensity. The threat of flooding and damage to water infrastructure will continue to increase over time as sea levels rise and the magnitude of storms increase.

Sea level-rise can also threaten the long term operation of drinking water, wastewater and stormwater utilities. Drinking water and wastewater utilities typically remain in operation for several decades. Some facilities can be at risk of increased inundation or reduced operational capacity over the intended operating life of the facility due to sea level rise.