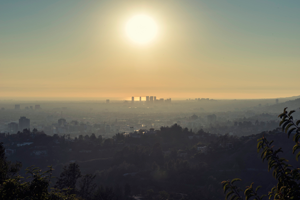 Smog as seen from Griffith Park, Los AngelesOzone can:

These effects have been found even in healthy people, but can be more serious in people with lung diseases such as asthma. They may lead to increased school absences, medication use, visits to doctors and emergency rooms, and hospital admissions.

Recent studies consistently report associations between short-term ozone exposures and total non-accidental mortality, which includes deaths from respiratory causes. Studies suggest that long-term exposure to ozone also may increase the risk of death from respiratory causes, but the evidence is not as strong as the evidence for short-term exposure.

People most at risk from breathing air containing ozone include people with asthma, children, older adults, and people who are active outdoors, especially outdoor workers. In addition, people with certain genetic characteristics, and people with reduced intake of certain nutrients, such as vitamins C and E, are at greater risk from ozone exposure.