Evoqua Water Technologies LLC (Evoqua) operates a carbon regeneration facility on the Colorado River Indian Tribes (CRIT) Reservation near Parker, Arizona. (See boxes below for a map and a description of Evoqua's process). Evoqua receives over 5,000 tons of spent carbon annually from across the United States. About 11% of this spent carbon is considered hazardous waste and is regulated by EPA under the Resource Conservation and Recovery Act (RCRA).

The facility is also regulated under other federal environmental laws including the Clean Air Act and the Emergency Planning and Community Right to Know Act.

On September 25, 2018, EPA made a Permit Decision (see also: Announcement of Permit Decision) to issue a RCRA Permit to the operator, Evoqua, and CRIT, for the facility’s hazardous waste activities.

The RCRA Permit, including the latest permit modifications, can be found at Evoqua's website.Exit

Facility Operator’s Petition for Review by the Environmental Appeals Board

The RCRA permit and the latest permit modifications can be found at at Evoqua's website.Exit

Further details, including the appeal documents, the notification of the stayed permit conditions, and the EAB June 2019 decision, can be found on the EAB website.

Revisions to the RCRA Permit on Remand

Revisions to the RCRA Permit were issued by the Region on January 23, 2020. These revisions were the result of the EAB decision that was issued on June 13, 2019 and which remanded three issues raised in the appeal. Those three issues involved: (1) the process by which the Permittees are required to report certain instances of non-compliance; (2) the appropriate regulation of Tank T-11; and (3) the technical feasibility of complying with certain Automatic Waste Feed Cutoff (AWFCO) requirements.

EPA sought public comment over a 45-day period regarding the proposed revisions to the Permit from October 7, 2019 through November 21, 2019. EPA also held a Public Meeting and Public Hearing on November 7, 2019 at the Bluewater Resort and Casino, located in Parker, Arizona.

During the Public Hearing, EPA received three verbal comments from one attendee, one for each of the three remanded issues. The Region received no other comments, either verbally or in writing, during the public comment period. The Region evaluated each of the comments received and provided its responses in the Final Remand Decision Materials.

Pursuant to the EAB’s June 13, 2019 Order, anyone who made comments and is dissatisfied with the Region’s responses or in the Final Remand Decision must file a petition seeking the EAB’s review. Such a petition must be filed within 30 days of the date notice was served to the commenter of the January 23, 2020 decision, in order to exhaust administrative remedies under 40 CFR § 124.19(l). See also 40 CFR § 124.19(a)(3). If no petition for EAB review of the Final Remand Decision is filed within that timeframe, the Agency will subsequently issue a “final agency action” that will place in effect the remanded and revised Permit conditions as well as the other Permit conditions that were stayed at the time of Evoqua’s original petition for review. See 40 CFR § 124.19(l)(2). See #2 - 11/01/2018 - Notification Regarding Effect of Petition for Review on Effective Date of Final RCRA Permit for Evoqua Water Technologies, LLC and the Colorado River Indian Tribes, Parker, AZ at the EAB website.

EPA is providing notice that the Permit Conditions that were stayed as a result of an appeal in this matter, including each of the Permit Conditions that were revised – to the extent of such revisions -- in the Final Remand Decision, are being put into effect through this Final Permit Decision, issued on February 27, 2020.  See 40 CFR § 124.19(l)(2).  See also: Final Agency Action Notification. 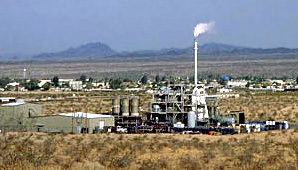 What is "Carbon Regeneration"?

Evoqua Water Technologies has previously been known as Siemens, US Filter, and Westates. The facility is now referred to as Evoqua, but the prior names remain in older documents attached to this web page.