Back to: Interpreting Statistics

Methods of statistical inference (statistical tests, confidence intervals) are sometimes misused or interpreted incorrectly in practice. Also, the methods should be used consistently with statistical assumptions (including independence assumptions).
Familiarity with basic terminology and concepts of statistical testing can be found in many sources, such as the U.S. EPA Office of Water's Statistical Primer. This page provides reminders and reinforcement of appropriate use of statistics, with brief reviews of some basic concepts. Concepts that an analyst should master to use statistical tools appropriately, but are not covered on this page, include assumptions of standard methods, one- versus two-sided testing, multiple-testing issues, and nonparametric methods.

In general, a statistical test has the following components. (1) A null hypothesis is formulated. This is usually a probability model that assumes no effect of interest, any apparent effects being attributable to chance. (2) A test statistic is chosen, which will be computed from results of the experiment to quantify how strongly the results contradict the null hypothesis. (3) Once the study has been conducted, the p-value is the probability of any result that contradicts the null hypothesis as strongly as the results actually obtained, based on the value of the test statistic.

Statistical tests and their associated p-values are easily misunderstood. Analysts who are not confident of their grasp of statistical tests will benefit from review of a transparent example, such as the "lady tasting tea" (Fisher 1956).

It should be noted that, in Fisher's example of the lady tasting tea, the investigator adopts a skeptical attitude towards the claim of discrimination ability and places a burden of proof on the claim. This is typical of research settings, where the researcher hopes to show that an effect has been observed that cannot be attributed to variation in the data. In general, care should be taken that the use of statistical test results are not associated with an inappropriate burden of proof. If one can identify a magnitude of effect that can be treated as biologically important, such as a critical percentage change of a variable relative to reference conditions, the assistance of a statistician may be sought in performing a procedure determining whether or not the 'biologically important' effect can be rejected, in lieu of the standard test of a no-effect null hypothesis.

Confidence intervals, discussed below, can be used to analyze data without assumptions about the relative burden of proof for different outcomes.

Although causal assessments may be based largely on observational data, some consideration of perspectives during planning of a randomized experiment may be helpful in understanding statistical testing concepts. At the planning stage, a test statistic is tentatively identified that will be computed from results of the experiment and used in deciding what outcome to report for the experiment. In our example, the number of cups that the subject will classify correctly is used to accept or reject the subject's claim. A cutoff (critical) value of the test statistic is identified, such that the chance of some erroneous conclusions is acceptably low.

Indeed, the experimenter hopes for a low chance of finding an effect, if there really is no effect, i.e., a low chance of a false positive. According to the null hypothesis, the treatments may be viewed simply as random labeling of experimental units. If the experimenter has decided to enforce a 5% chance of a false positive, use of the critical p-value of 0.05 is justified as just a matter of checking that results satisfy a pre-specified criterion, before claiming to have observed something of interest. In addition, the experimenter hopes that if there are substantial effects of the treatment, there will be a substantial probability of finding statistical significance, i.e., that the test will have good power.

A 95% confidence interval has the following interpretations: (1) There is a 95% chance of the true value of the parameter falling within the interval; (2) Values outside the interval can be rejected on the basis of a two-sided statistical test with alpha 5%. 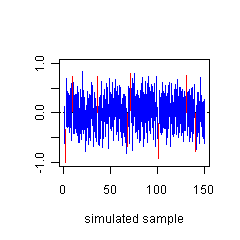 Graphical display of confidence intervals is particularly encouraged in comparative contexts, such as when comparing results among successive years of monitoring. p-values are likely to be more difficult to compare.

Applying confidence intervals in a stressor-response context may require that the analyst specify a magnitude of effect that would ecologically meaningful. For example, one might specify a priori that a decrease in total richness of 5 taxa would constitute an ecologically meaningful decrease. Then, one would examine the estimated mean effect of a stressor on total taxon richness and its associated confidence intervals to ascertain whether this threshold was exceeded.

General Recommendations for the Use of Statistical Tests and Confidence Intervals