Research and special studies are conducted to strengthen our understanding of dry deposition processes, improve model inputs, and test new monitoring methods. Click on the links below to read about on-going research at CASTNET sites.

The Monitor for AeRosols and GAses (MARGA) 1S system was deployed at the Beltsville, MD, CASTNET site between January 2013 and June 2015. Five extended measurement campaigns have produced 17 months of hourly ambient concentration data for soluble gases (HNO3, HONO, SO2, and NH3) and particles (NO3-, SO42-, NH4+, Ca2+, Mg2+, K+, and Na+) including eight months of co-located measurements from two separate MARGA units.

The MARGA units performed well when compared with a co-located pulsed fluorescence SO2 analyzer with hourly SO2 gas concentrations having a median average relative percent difference (MARPD) of 35%. Performance statistics between the co-located MARGA units were excellent with MARPD values ≤15% for aerosol species (NH4+, NO3-, SO42-) and values ≤ 20% for gaseous species (HNO3, HONO, SO2). Ammonia was an exception to this (MARPD = 38%) as its polarity and solubility make it susceptible to inlet adsorption artifacts. To investigate this, one of the MARGA inlets was shortened from 115" to 33", which increased the overall recovery of NH3 by 2.6μg m-3 d-1 over a cold weather period. This phenomenon was not observed during the warmer weather and the MARPD values during this time were ~26% for NH3.

A MARGA 1S unit was deployed by Colorado State University in Theodore Roosevelt National Park and utilized during the FRAPPE Exit air quality study. In addition to data collected during those intensives, that unit was co-located in a high NH3 concentration area (a lab in Fort Collins) with two hourly NH3 analyzers (Air Sentry and Picarro).

Recently, two of the three MARGA 1S units were converted into a single unit able to sample concentration gradients by placing inlets at two different heights. This unit is slated to be tested by both in the laboratory this fall and deployed at a coastal site near Charleston, SC, in the summer of 2016.

Ambient particulate and gaseous concentrations were sampled from the two MARGA units from November 2012 - February 2013. Data from this time period are currently being validated and analyzed. The slopes for regression between the two instruments is within ± 6% for particulate SO42-, NH4+, and gaseous SO2 and NH3, and ± 12% for particulate NO3-. The instruments are also currently being evaluated for accuracy with results from the weekly CASTNET filter pack, the bi-weekly AMoN passive NH3 sampler, and hourly SO2 and NOy. Improvements to the operational methods and protocols have been developed by CAMD during this initial phase of the field comparison. The two MARGA units received upgrades to parts and software components in January 2013. Measurements collected after the upgrade are still under evaluation. One of the two MARGA units was shipped to Colorado State University for inclusion in an intensive atmospheric chemistry sampling campaign to take place in Theodore Roosevelt National Park, ND, during the summer of 2013. A third unit, a new model was installed in April at the Beltsville site for precision and accuracy comparisons. 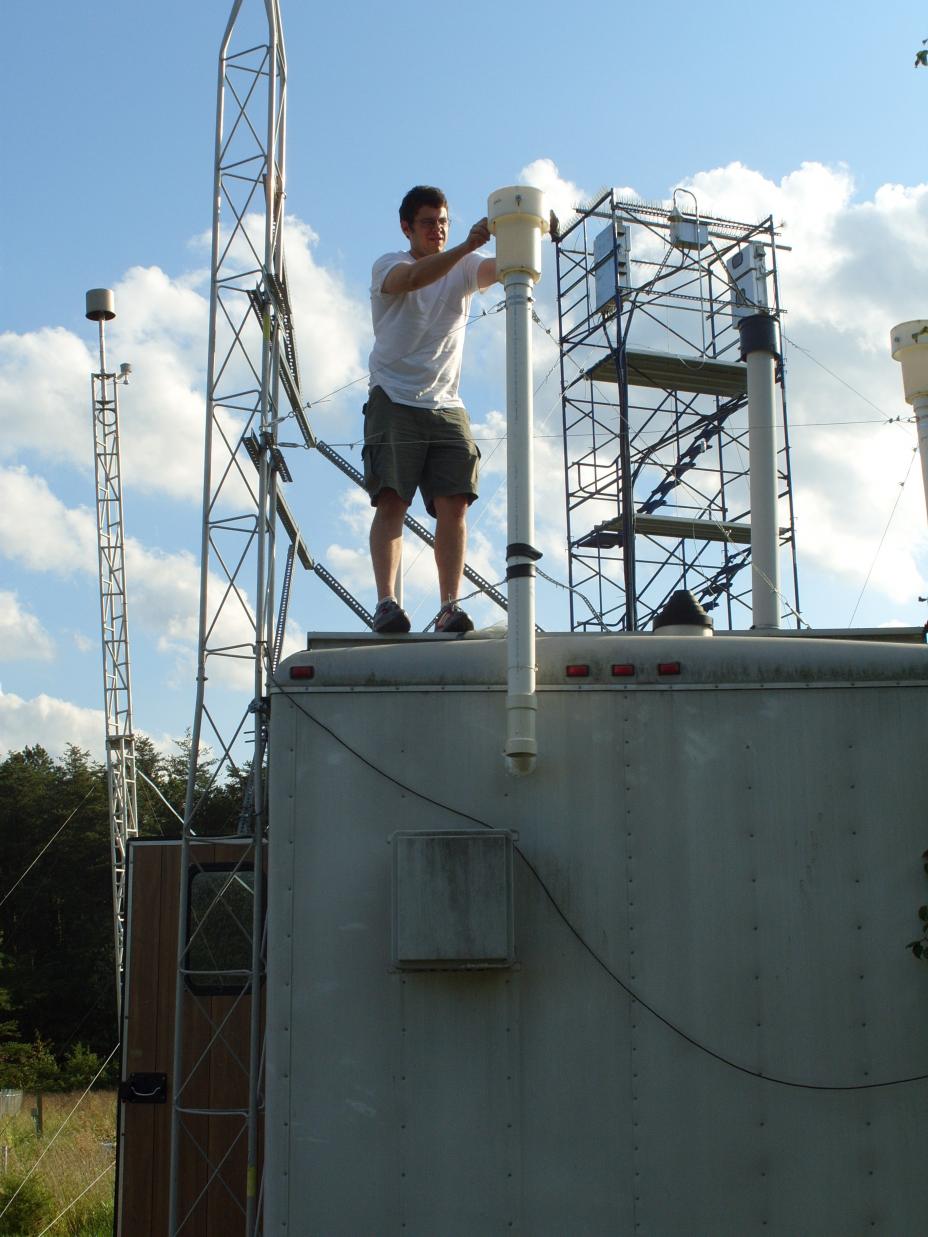 The two MARGA systems (MARGA-1 and MARGA-2) were installed at the BEL116 CASTNET site at the end of 2011 and have been undergoing maintenance and replacement of the analytical modules. As of April 1, MARGA-2 is collecting ambient concentration measurements and the results are being evaluated for consistency and stability. Additional parts are needed for MARGA-1, but it is expected to be operational by the end of April.

ORD continues to assess the applicability of the MARGA 2S, a direct flux measurement system, at the Duke Forest research site in NC.

Installation of the two MARGA systems at the BEL116, MD, site has been completed. Internet access was connected to the instrument laptops for real time, remote data access. A laboratory space was created at a nearby facility for preparing solutions and washing the glassware. Performance quality solutions have been prepared at the lab and transported to the site, where quality assurance tests using the manufacturer's recommended data quality objectives are currently in progress. The first step is to test the analytical response of the MARGAs with an internal standard solution and standards of ammonium sulfate ((NH4)2SO4), potassium chloride (KCl), and ammonium nitrate (NH4NO3) in concentrations assumed to bracket typically observed atmospheric concentration levels. The next steps will be for the MARGAs to undergo a field performance evaluation.

The objectives of the Field Performance Evaluation are:

Current collaborators in this project include: 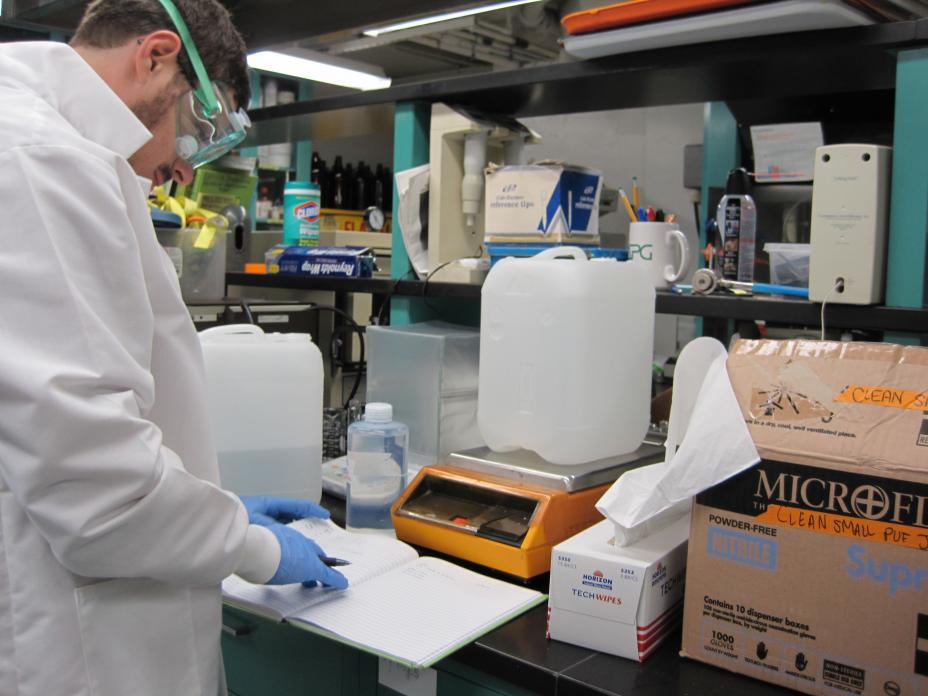 tested for use in routine network operations at the Beltsville, MD, CASTNET site (BEL116).

Installation of two MARGA systems at BEL116 is almost complete. The MARGA systems were moved to the site from EPA's ORD monitoring station in RTP, NC. The next steps for the MARGA include:

Updates on the MARGA study will continue to be provided on this site periodically. 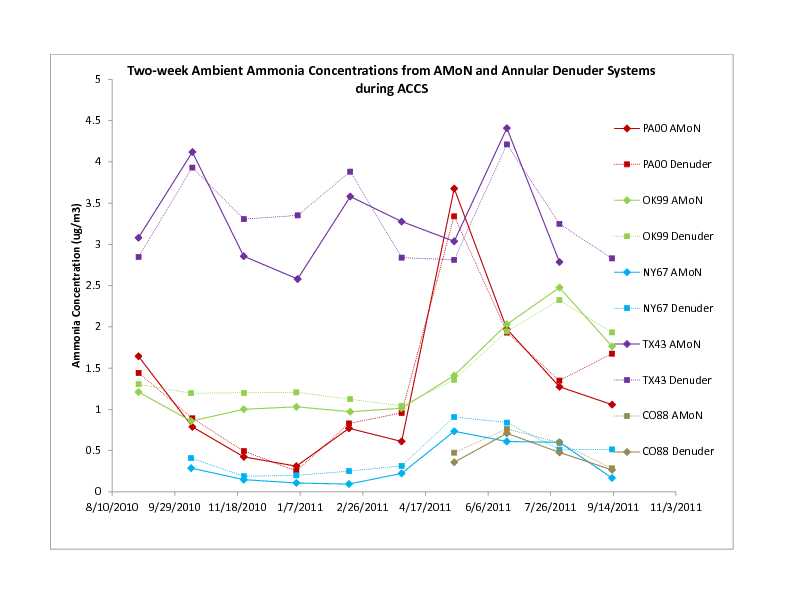 The ACCS began in August 2010 and the last sample was collected in October 2011. Final data, including ambient NH3 concentrations and laboratory and field blanks, have been submitted to EPA. Preliminary results from the AMoN Radiello samplers versus duplicate annular denuders (reference method) from the five sites are described below.

The mean absolute relative percent difference (MARPD) between the passive samplers and the annular denuders from the five sites was 20%. MARPDs between individual sites ranged from 11% (Palo Duro, TX) to 46% (Connecticut Hill, NY). The first figure below shows the bi-weekly NH3 concentrations as measured by AMoN and the average concentrations over the 2 one-week denuder sampling periods for each site. Concentrations ranged from less than 0.5 ug/m3 (Connecticut Hill, NY, and Rocky Mountain National Park, CO) to 4.5 ug/m3 (Palo Duro, TX). The second figure shows the 2-week average NH3 concentrations from AMoN versus the annular denuders for the 5 ACCS sites. There is good correlation (0.96) between the two sampling methods for the range of concentrations measured during the year sampling period.

The precision of the duplicate denuder systems at the five sites was 10%. Triplicate Radiello passive samplers were deployed at the five AMoN sites during the 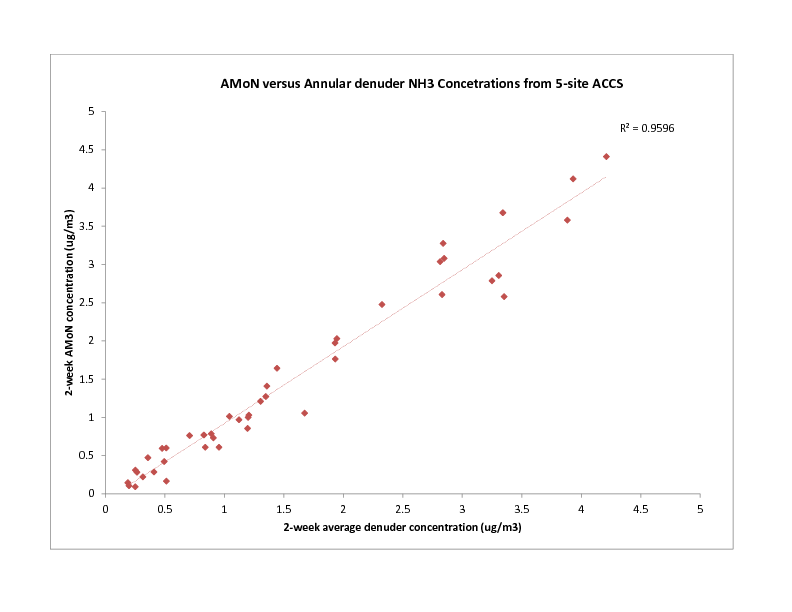 ten ACCS sampling periods. The precision of the triplicate samplers was 12% and comparable to previous quality control studies performed by the NADP.

The presentation with the preliminary results from both the ammonia and ion studies can be found on the NADP website here Exit(22 pp, 1.6 K, About PDF). 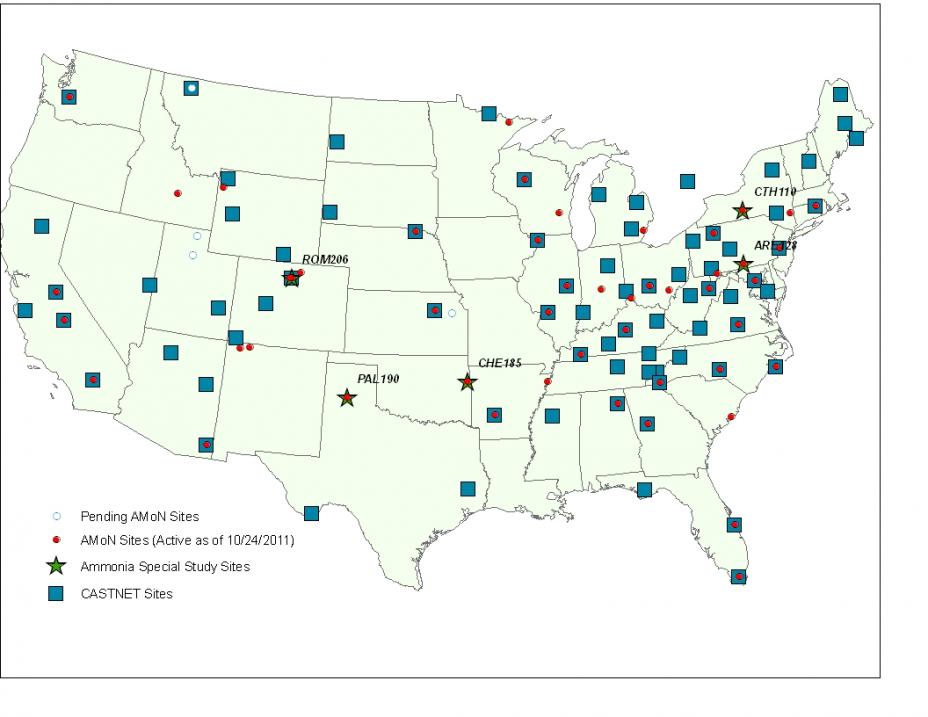 Ambient ammonia (NH3) concentrations are not routinely measured at CASTNET, Chemical Speciation Network (CSN) or NCore sites, which results in a significant gap in our understanding of the total nitrogen budget. In some areas, NH3 dry deposition is estimated to be approximately 30% of the total deposited nitrogen (e.g., Rocky Mountain NP). The Ammonia Monitoring Network (AMoN), a newly formed sub-network within the NADP, measures ambient NH3 concentrations at approximately 50 sites throughout the United States.

This study was developed to validate the passive Radiello samplers deployed in the AMoN, to characterize the sulfur and nitrogen species collected on the CASTNET filter pack and the ion canisters from the Super SASS (used in the CSN), and evaluate a newly developed mini-parallel plate denuder (MPPD) for measuring NH3 in one of the channels of the Super SASS. To accomplish these goals, a five-site study (site locations indicated on the map below) plan was developed. The first sampling period began in August 2010, and the study was completed in September 2011. To stay within budget, two-week sample deployments occurred every 6 weeks for a total of 10 sampling time periods. Each site was collocated with AMoN, which provided a two-week NH3 concentration. All AMoN samplers were prepared, shipped and analyzed by NADP’s Central Analytical Laboratory. AMoN data are processed and posted to the NADP AMoN website routinely. In addition to the passive samplers, each of the five sites also deployed two consecutive 1-week annular denuders systems (ADS) as the reference method. Three sites deployed two consecutive 1-week MPPDs housed within the Super SASS module and two consecutive 1-week ion canisters. The MPPDs are being tested for routine use in the CSN for capturing 24- 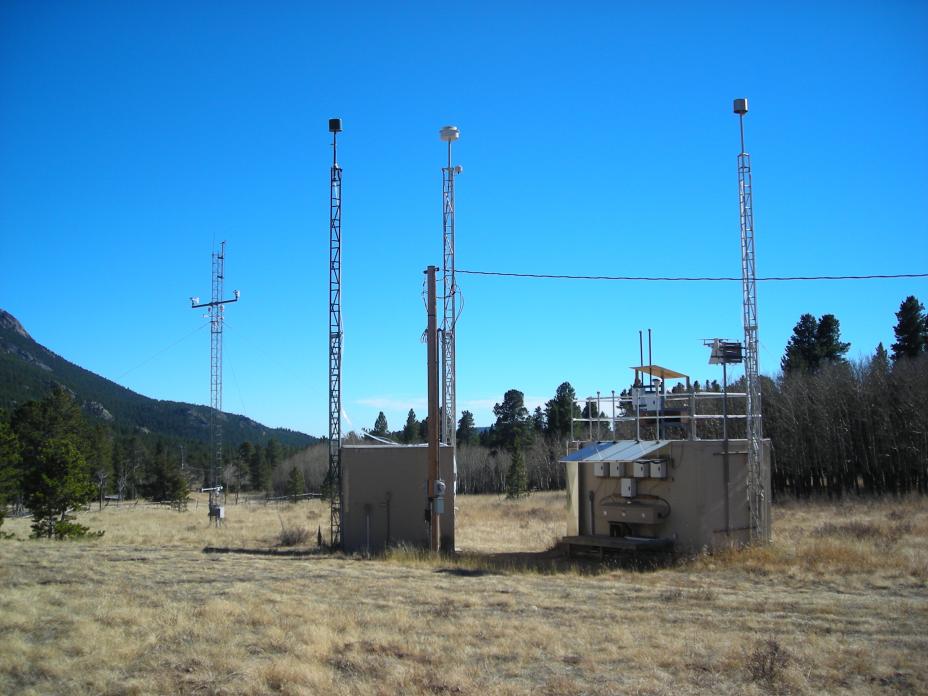 hour NH3 concentrations. The dual ADS systems were analyzed for a full suite of anions and cations for comparison to the CASTNET filter pack and Super SASS ion measurements. The ion canisters were analyzed by RTI for the non-NH3 analytes. A summary of the study sites are shown in the table below.

Preliminary results show a good comparison between the ADS and AMoN samplers. Comparisons between the MPPDs and the ADS are variable, but this may be a result of invalid flow at the Rocky Mountain NP (ROM206/406) site. Updates will be provided here and the final results will be published in peer-reviewed journal articles.

Funding for this study was provided by EPA’s Office of Research and Development, Clean Air Markets Division and Office of Air Quality Planning and Standards (OAQPS). The Super SASS systems were provided by OAQPS. 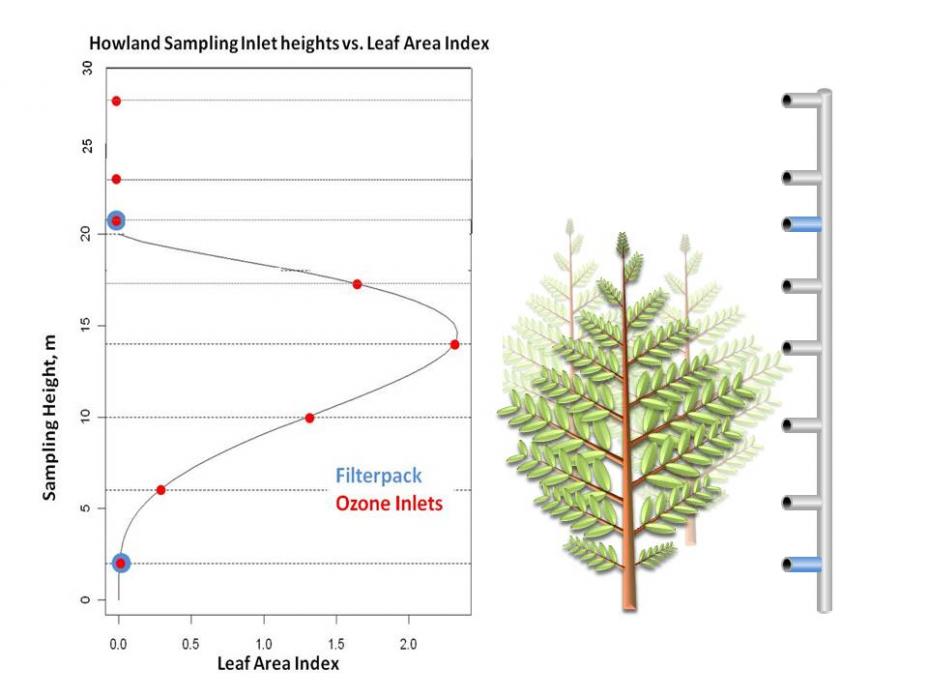 CASTNET will be conducting a direct deposition study at the Howland, ME, AmeriFlux site. The study includes two filterpacks installed above and below the forest canopy at sampling heights of 20.5 and 2 m, respectively, and a multi-stage, solenoid-switch ozone sampling system with inlets at eight different heights: 28, 23.5, 20.5 (just above canopy), 17 (just below canopy), 14.5, 10, 6, and 2 m. The heights were chosen based on the vegetation in the area, represented by Leaf Air Index (LAI), and are represented in the figure below. 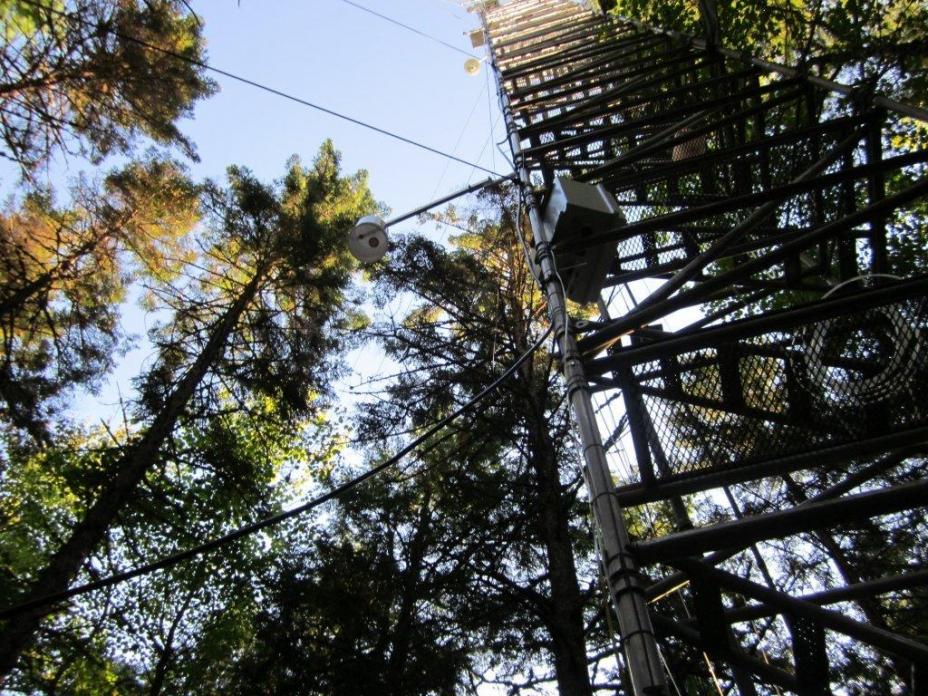 basis for ozone and on a weekly basis for the suite of pollutants sampled with the filterpack. The study is being coordinated by CAMD, EPA's Office of Research and Development (ORD), Mactec, and the State of Maine. In addition to the direct deposition study, a comparison between the current CASTNET site (HOW132) and the AmeriFlux site (HOW191) will run from September 2011 - September 2012 to determine if any biases would be introduced if the HOW132 site is permanently moved to the AmeriFlux site. Additional information about the Howland AmeriFlux site can be found here: AmeriFlux at Howland, ME. 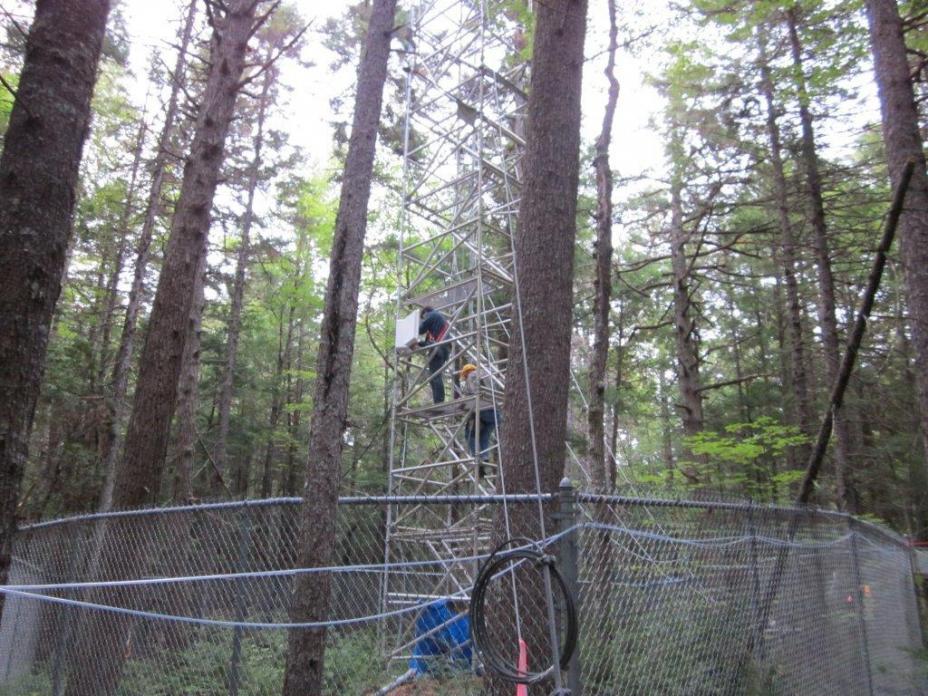 Differences in ozone concentrations will be calculated at the different inlet heights to estimate the deposition flux, above and below the canopy. In addition, CASTNET filterpacks will be deployed on the normal Tuesday - Tuesday CASTNET schedule.