Environmental Challenges for the Charles River

Elevated bacteria levels are primarily caused by the following sources:

A 1985 Federal Court Order directed the newly formed Massachusetts Water Resource Authority to develop a CSO reduction plan that included construction of the sewage treatment plant on Deer Island and reconstruction of much of the sewer system in metropolitan Boston. This billion dollar investment yielded dividends of a drastic reduction of CSOs into Boston Harbor and its tributaries leaving Boston with some of the cleanest urban rivers and urban beaches in the nation.. This was the final step to reducing CSO discharges to the Charles River from 1.7 billion gallons per year (1988) to just 6.88 million gallons per year.

Under the 2006 settlement, MWRA committed to take a number of actions at the Cottage Farm

The MWRA also performed an engineering evaluation of further system enhancements, including: 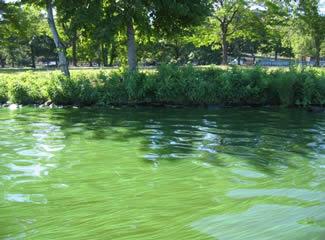 Nutrients, primarily phosphorus, are a chief culprit for dramatic algae blooms that plague the River with blue-green algae during the summer months.

These "blue green" algae blooms, are a form of bacteria known as Cyanobacteria, whose cells may release a toxin when they die. Exposure to the toxin can cause skin rashes and irritate the nose, eyes or throat, and if ingested can lead to serious liver and nervous system damage. Other harmful effects of the algae include reduced water clarity, nuisance scum, and reduced oxygen in the water which is necessary for a healthy fish habitat.

EPA's goal is to reduce phosphorus discharges to the lower Charles by 54 percent to restore the river to a healthy state. In order to meet that goal, EPA must reduce the amount of stormwater runoff entering the River.

For more information on nutrient challenges »

How Phosphorus gets into the River

Phosphorus enters the river by a number of routes, some of which are already controlled by permits issued by EPA and MassDEP. These include:

How to Regulate Phosphorus Discharges

In October 2007, EPA and the Massachusetts Dept. of Environmental Protection (MassDEP) announced aggressive targets to reduce harmful levels of the nutrient phosphorus from entering the Charles River through stormwater.

EPA and MassDEP established a "Total Maximum Daily Load" (TMDL) for discharges of phosphorus into the lower Charles River. A Total Maximum Daily Load, or TMDL, is a calculation of the maximum amount of a pollutant that a waterbody can receive and still safely meet water quality standards. A TMDL determines how much of a pollutant can be put into a body of water before it has harmful effects. EPA and MassDEP developed and approved the new limits on phosphorus to the lower Charles using extensive data collected in the river over several years.

EPA and MassDEP are permitting municipalities and other stormwater dischargers to reduce their contribution of phosphorus to the Charles.

Techniques to reduce phosphorus in stormwater include the construction of infiltration chambers, the installation of permeable pavement that enhances the return of water to the soil, the use of high efficiency street sweepers, and other low-impact development methods.

The Clean Water Act (CWA) and related regulations define the specific industrial and municipal stormwater sources that must be authorized by an NPDES permit. The CWA recognizes that other sources, such as commercial, industrial, and other private properties, may need to be regulated on a case-by-case or category-by-category basis based on additional information or localized conditions. The authority to regulate other sources based on the localized adverse impact of stormwater on water quality through NPDES permits is commonly referred to as the "Residual Designation" authority.

In May 2019, EPA New England received a petition from the Conservation Law Foundation ("CLF") and the Charles River Watershed Association ("CRWA"), requesting that EPA exercise its Residual Designation authority for parcels greater than 1 acre in the Charles River watershed.

In response, EPA has initiated a detailed stakeholder outreach process outlined in the letter below:

In addition, EPA will hold a number of webinars for specific stakeholder groups on the following dates:

A copy of the presentation that was provided to the above stakeholder groups is available here:

In addition, EPA has developed a Frequently Asked Questions document that is available here: