EPA’s current endocrine disruption tests do a thorough job of screening chemicals but they are low throughput and expensive (50-100 chemicals per year at a cost of approximately $1 million per chemical). Given this limitation, EPA researchers have been developing new rapid methods that can quickly screen thousands of chemicals. Chemicals that may have an effect on hormonal systems and lead to endocrine disruption can often be identified by assessing how they interact with the estrogen receptor, androgen receptor and the thyroid. 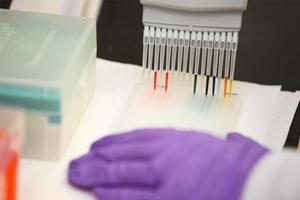 EPA researchers developed a number of innovative screening tests to prioritize potential endocrine disrupting chemicals. Positive results on these tests suggest that the chemical may mimic the actions of estrogen in the body and lead to endocrine disruption. These rapid methods often called "high-throughput” are most fully developed for detecting disruptions in the estrogen pathway.

With input from a Scientific Advisory Panel, EPA determines which of these new methods can be used to screen and prioritize chemicals for endocrine disruption. EPA researchers are also researching a chemical's potential to disrupt two other hormonal systems: the androgen hormones that direct male reproductive development and activities, and thyroid hormones.

High-throughput testing to evaluate chemicals for androgen disruption is underway and methods for thyroid hormones are being planned. Systems biology approaches such as adverse outcome pathways and graphical systems models are also being developed to help predict if a chemical is an endocrine disrupting chemical.