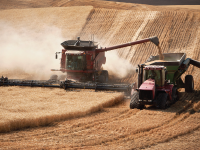 Agricultural and forestry production are highly sensitive to climate conditions. Climate change will alter the spatial and temporal distribution of temperature and precipitation as well as the frequency and severity of extreme events, such as flooding and drought. These changes are likely to affect future agriculture and forest productivity, and may lead to increased variability in yield.

Without significant global GHG mitigation, climate change is projected to have a large negative impact on the U.S. agriculture sector. Table 1 presents the projected percent change in national crop yields in 2100 due to unmitigated climate change under the Reference scenario. For all major irrigated crops, with the exception of hay, climate projections from both the IGSM-CAM and MIROC models result in decreased yields, with very substantial declines projected for soybeans, sorghum, and potatoes. For rainfed crops, climate projections using the drier MIROC climate model result in substantial declines for all crops, particularly cotton, sorghum, hay, wheat, and barley. Rainfed yields using the wetter IGSM-CAM climate model are more varied, ranging from a substantial decrease in hay yields to moderate gains in cotton, sorghum, and wheat yields.9 Projected declines in crop productivity resulting from unmitigated climate change over the longer term are consistent with the findings of the assessment literature.10

As shown in Figure 1, the effect of unmitigated climate change on forest productivity in the U.S. varies over time and depends on the climate model used. Using the IGSM-CAM projections, hardwood yields increase by 2100, while the change in softwood yields is very small. Projections using the drier MIROC climate model result in increased hardwood and softwood yields by the end of the century, though the gains are smaller than those projected under the Mitigation scenario. 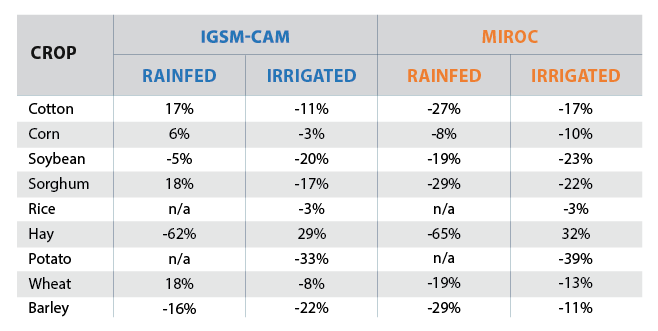 Estimates in this table assume no technological improvements in yields over time such that crop productivity in future periods relative to a scenario with no climate change is based purely on differences in climatic conditions. This assumption allows the analysis to isolate and evaluate climate change impacts on crops without confluence with other factors. Results do not include effects from changes in ozone, pests, and disease. Rice and potatoes are simulated under irrigated management only.11

Figure 1. Projected Change in Potential Forestry Yields with and without Global GHG Mitigation

Percent change in potential hardwood and softwood yields across the U.S. relative to the base period (1980-2009) under the Reference and Mitigation scenarios for the IGSM-CAM and MIROC climate models. Effects of wildfire, pest, and disease on yields are not included.

Global GHG mitigation is estimated to substantially benefit U.S. crop yields. Figure 2 presents the projected change in national crop yields for key crops under the Mitigation scenario compared to the Reference. The figure shows changes in rainfed and irrigated yields using projections from the IGSM-CAM climate model and the relatively drier MIROC model. In general, the benefits to crop yields of global GHG mitigation increase over the course of the century, with the exception of rainfed hay (for both climate models) and rainfed sorghum (for IGSM-CAM). Global GHG mitigation is projected to have a particularly positive effect on the future yields of irrigated soybeans, irrigated potatoes, and irrigated and rainfed barley.

The projected effect of GHG mitigation on forest productivity is less substantial compared to the response for crops. Figure 1 shows the estimated percent change in average national forest productivity (contiguous U.S.) under the Reference and Mitigation scenarios relative to the base period. Although forest productivity generally increases with climate change under both scenarios, projections using the relatively wetter IGSM-CAM climate model result in larger gains under the Reference scenario, particularly for hardwoods. Higher forest productivity under the IGSM-CAM Reference in the future is likely driven by the enhanced positive effects of CO2 fertilization under the high-emission Reference, along with the response to increases in precipitation in many areas of the contiguous U.S. that are forested. The MIROC climate projections, on the other hand, result in slightly rising yields of both hardwoods and softwoods through 2100 under the Mitigation case. It is important to note that these yield estimates do not include the effects of wildfire, pests, or disease, which would likely decrease simulated productivity based on the findings of the assessment literature,12 especially under the Reference scenario (See Wildfire section of this report).13 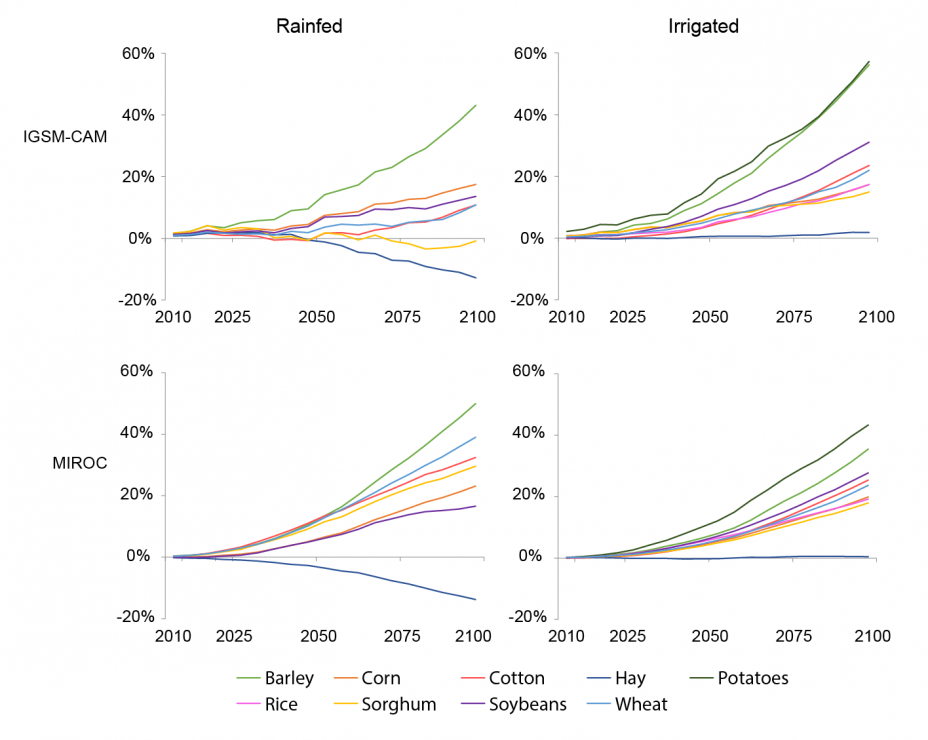 Percent change in crop yields from the EPIC model in the contiguous U.S. under the Mitigation scenario compared to the Reference for the IGSM-CAM and MIROC climate models.14 Rice and potatoes are simulated under irrigated management only.

The analysis uses the Environmental Policy Integrated Climate (EPIC) model15,16 to simulate the effects of climate change on crop yields in the contiguous U.S. The analysis examines agricultural crop productivity for multiple crops, including corn, soybean, wheat, alfalfa hay, sorghum, cotton, rice, barley, and potatoes. Yield potential is simulated for each crop for both rainfed and irrigated production with the exception of rice and potatoes, which are assumed to be irrigated.17 Because production regions may change over time in response to climate change, EPIC simulates potential cultivation and production in areas within 100 km (62 miles) of historical production regions.

EPIC is driven by changes in future climate from both the IGSM-CAM18 and MIROC climate models under the Reference and Mitigation scenarios. The results presented in this section include the effect of CO2 fertilization on crop yields; Beach et al. provide a sensitivity analysis of the effect of CO2 fertilization on the crop yield results from EPIC.

Changes in forest growth rates are simulated using the MC1 dynamic vegetation model, consistent with the approach described in Mills et al. (2014)19 and the Wildfire and Carbon Storage sections of this report.20 MC1 is also driven by the IGSM-CAM and MIROC models, and assumes full CO2 fertilization effects.

The effects of changes in wildfires, pests, disease, and ozone are not captured in this analysis.21 Inclusion of these effects on crop and forest yields would likely result in increased benefits of GHG mitigation compared to those presented in this section.

For more information on the CIRA approach and results for agriculture and forestry crop yields analysis, please refer to Beach et al. (2015)22