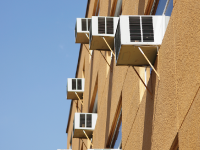 Rising temperatures are projected to increase electricity demands for cooling. Figure 1 shows the percent change in regional heating and cooling degree days (HDDs/CDDs, see Approach for definitions) from 2005 to 2050 in the Reference scenario. Results are presented for the three models used in the analysis (GCAM, ReEDS, and IPM), which exhibit similar trends of falling HDDs (shown in purple) and rising CDDs (shown in orange). These trends are consistent with projections described in the assessment literature.8 Across the U.S., HDDs decrease between 18%-29% on average, with greater decreases occurring in the South due in part to already-high temperatures. The increase in CDDs is highest in the Northeast and Northwest (68% and 71% on average, respectively). The projected changes in HDDs and CDDs have implications for regional electricity demand. Average U.S. electricity demand is projected to increase under the Reference by 1.6%-6.5% by 2050, compared to a Control with no temperature change. Across the regions and models shown in Figure 2, electricity demand is projected to increase by 0.5%-9.0%, with the exception of the ReEDS model in the Northwest, which projects a decrease of 0.5%.9

Figure 1. Projected Impact of Unmitigated Climate Change on Regional Heating and Cooling Degree Days from 2005 to 2050 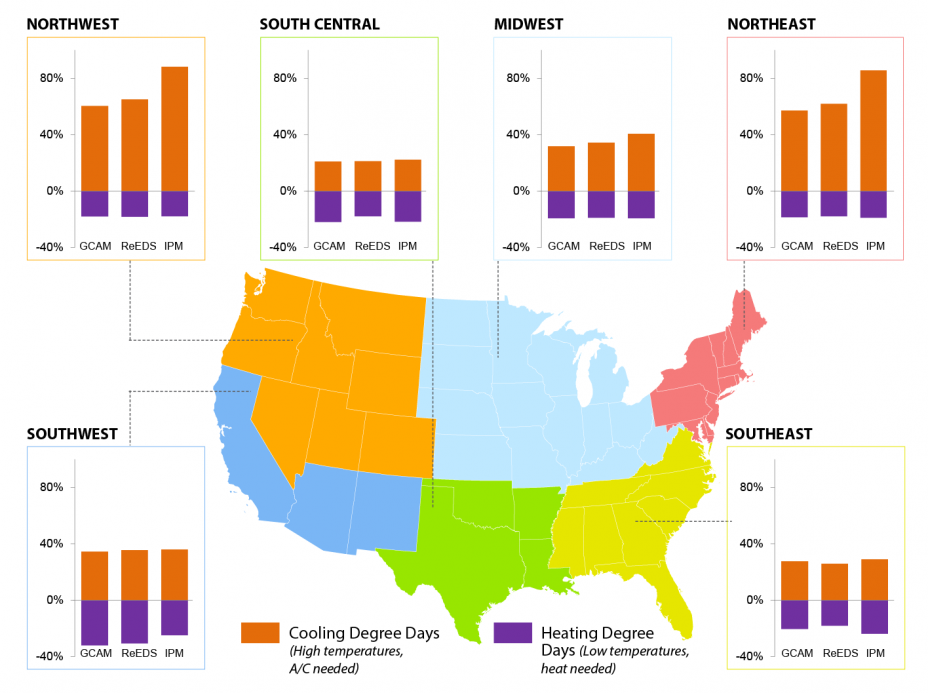 Percent change in HDDs and CDDs from 2005 to 2050 under the Reference compared to a Control with no temperature change. Results are presented for six regions and for the three models used in the analysis.

Figure 2. Change in Regional Electricity Demand in 2050 with and without Global GHG Mitigation 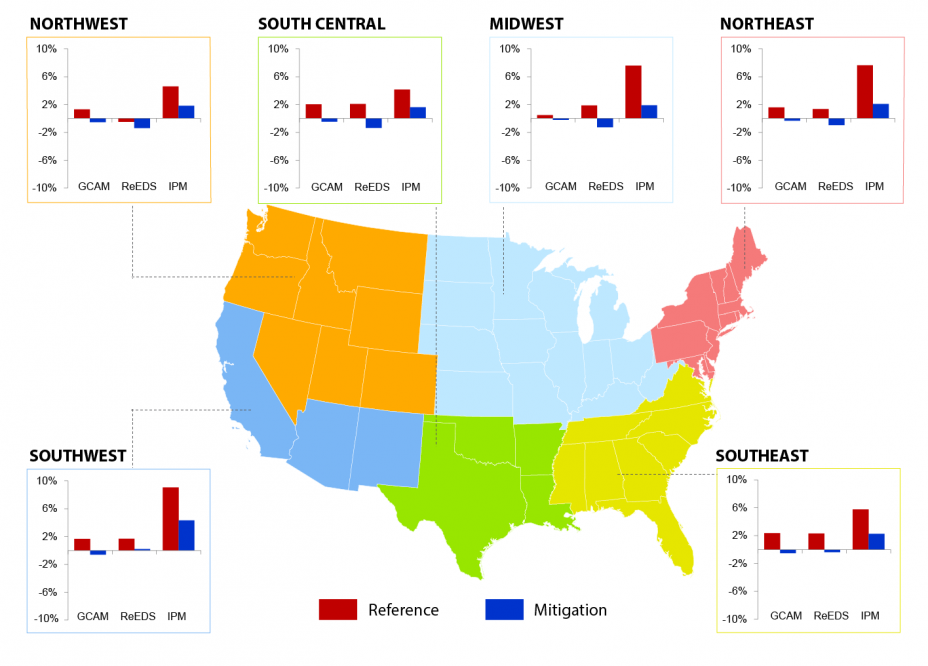 Change in regional electricity demand for the Reference and Mitigation scenarios relative to a Control (no temperature change). Results are presented for six regions and for each of the three models used in the analysis (GCAM, ReEDS, and IPM).

The CIRA analysis examines how rising temperatures under climate change will affect electricity demand. It applies a common set of temperature projections from IGSM-CAM to three models of the U.S. electric power sector:

The models project changes in electricity demand as functions of changes in heating and cooling degree-days (HDDs/CDDs). HDDs and CDDs are one way to measure the influence of temperature change on energy demand. They measure the difference between outdoor temperatures and a temperature that people generally find comfortable indoors. These measurements suggest how much energy people might need to use to heat and cool their homes and workplaces. The analysis compares the results across the CIRA scenarios, while also accounting for non-climate changes in electricity demand (e.g., population and economic growth). To assess the effect of rising temperatures in the Reference and Mitigation scenarios, changes in heating and cooling degree days and electricity demand are compared to a Control that assumes temperatures do not change over time.

For more information on the CIRA approach and results for the electricity demand sector, please refer to McFarland et al. (2015).14