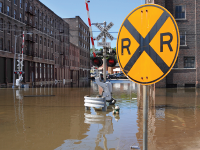 Extreme precipitation events have intensified in recent decades across most of the U.S., and this trend is projected to continue.4 Heavier downpours can result in more extreme flooding and increase the risk of costly damages.5 Flooding affects human safety and health, property, infrastructure, and natural resources.6 In the U.S., non-coastal floods caused over 4,500 deaths from 1959 to 2005 and flood-related property and crop damages averaged nearly $8 billion per year7 from 1981 to 2011.8 The potential for increased damages is large, given that climate change is projected to continue to increase the frequency of extreme precipitation events and amplify risks from non-climate factors such as expanded development in floodplains, urbanization, and land-use changes.9

Without GHG mitigation, climate change under the IGSM-CAM projections is estimated to increase monetary damages associated with inland flooding across most of the contiguous U.S. Figure 1 presents the projected flood damages in 2050 and 2100 under the Reference scenario. As shown, substantial damages are projected to occur in more regions over time. By 2100, damages are projected to be significantly different from the historic period (at a 90% confidence interval) in 11 of the 18 large watersheds (2-digit hydrologic unit codes). The greatest damages are projected to occur in the eastern U.S. and Texas, with damages in these regions ranging from $1.0-$3.7 billion in 2100.10 Projections of increased flood damages across most of the U.S. are consistent with the findings of the assessment literature.11

Estimated flood damages under the Reference scenario in 2050 and 2100 for the IGSM-CAM climate model (millions 2014$). Results are presented for the 18 2-digit hydrologic unit codes (HUCs) of the contiguous U.S. Stippled areas indicate regions where the projected damages are significantly different from the historic period (at a 90% confidence interval).

Under the relatively wetter IGSM-CAM climate projections, global GHG mitigation is projected to result in increased flooding damages compared to today, but decreased damages compared to the Reference scenario in most regions of the contiguous U.S. As shown in Figure 2, damages are reduced in 10 out of 18 regions in 2050 and in 14 out of 18 regions in 2100, with particularly pronounced differences between the scenarios in 2100. In 2100, the modeled reduction in damages is approximately $2.9 billion. By the end of the century, substantial benefits are projected over much of the Great Plains and Midwest regions, where damages are estimated to be reduced between 30% and 40% in many states. The four regions not showing benefits of GHG mitigation under the IGSM-CAM projections are located in the western part of the U.S., which also faces the highest risk of drought, as described in the Drought section of this report.

Figure 2 also presents results using the MIROC climate model, which projects a drier future compared to the IGSM-CAM model. Under the MIROC projections, flooding damages are generally reduced under both the Reference and Mitigation scenarios and, as a result, there are modest disbenefits of mitigation across most of the contiguous U.S. in 2050 and 2100 (Figure 2). In 2100, damages are projected to increase nationally by $38 million under the Mitigation scenario compared to the Reference.

Figure 2. Change in Flooding Damages Due to Global GHG Mitigation 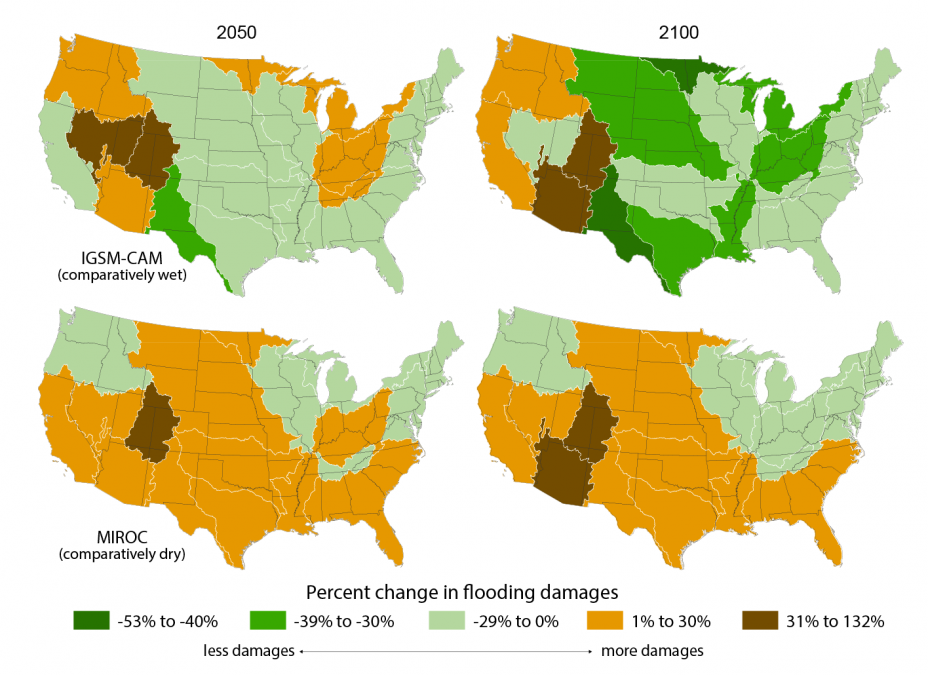 The CIRA analysis quantifies how climate change could affect inland flooding damages in the contiguous U.S. Given the complexities inherent in projecting national flood damages, including the need for small watershed-scale hydrologic modeling, the results presented in this section should be considered first-order estimates. The analysis estimates changes in inland (non-coastal) flood damages following the approach described in Wobus et al. (2013).12 Specifically, the analysis applies statistical relationships between historical precipitation and observed flood damages in each region of the U.S. to estimate the probability of damaging events occurring in a given year for the baseline period (1983-2008). Flood probabilities are then updated based on precipitation projections for specific events (i.e., 1-, 3-, 5-, and 7-day precipitation totals) under the Reference and Mitigation scenarios to estimate future flood damages. The analysis relies upon climate projections from two climate models: IGSM-CAM, which projects a relatively wetter future for most of the U.S., and the drier MIROC model. Damages are aggregated to the 18 U.S. Geological Survey National Water Resource Regions (WRRs) for two future periods (2050 and 2100), and are then statistically compared to modeled damages for the historic period. Importantly, the estimated damages do not include impacts on human health or economic disruption. The approach assumes that the distribution of monetary damages from flooding, including the effects of non-climate risk factors, will not change in the future.13 Finally, the value of damages occurring in the future is scaled to account for changes in wealth using projected increases in per capita income in the two CIRA scenarios.