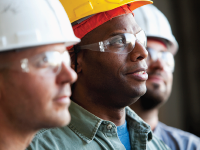 Climate change may affect labor in a number of ways, but projections of hotter summer temperatures raise a particular concern. Extreme summer heat is increasing in the U.S. and will be more frequent and intense in the future.31 Heat exposure can affect workers’ health, safety and productivity.32 When exposed to high temperatures, workers are at risk for heat-related illnesses and therefore may take more frequent breaks, or have to stop work entirely, resulting in lower overall labor capacity. This is especially true for high-risk industries where workers are doing physical labor and have a direct exposure to outdoor temperatures (e.g., agriculture, construction, utilities, and manufacturing).33

Without global GHG mitigation, an increase in extreme heat is projected to have a large negative impact on U.S. labor hours, especially for outdoor labor industries. In 2100, over 1.8 billion labor hours across the workforce are projected to be lost due to unsuitable working conditions. These lost hours would be very costly, totaling over $170 billion in lost wages in 2100.

Figure 1. Impacts of Unmitigated Climate Change on Labor in the U.S.

Figure 2. Labor Impacts in the U.S. with Global GHG Mitigation

Figure 3. Economic Impacts to Labor with and without Global GHG Mitigation 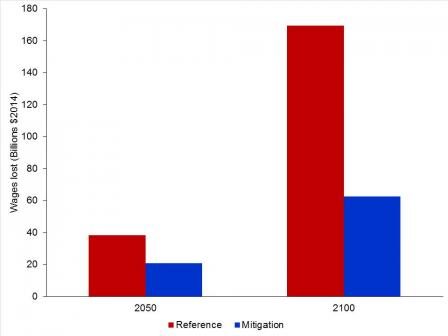 Estimated wages lost under the Reference and Mitigation scenarios for all labor categories in the contiguous U.S. (billions 2014$).Top of Page

When comparing the two scenarios (Figure 3), global GHG mitigation is projected to prevent the loss of approximately 360 million labor hours across the workforce in 2050, saving nearly $18 billion in wages. In 2100, the avoided loss of labor hours more than triples, and losses are substantially reduced over a majority of the contiguous U.S. Specifically, mitigation is estimated to prevent the loss of nearly 1.2 billion labor hours and $110 billion in wages in 2100 compared to the Reference.

The CIRA analysis focuses on the impact of changes in extreme temperatures on labor supply34 across the contiguous U.S. Specifically, the analysis estimates the number of labor hours lost due to changes in extreme temperatures using dose-response functions for the relationship between temperature and labor from Graff Zivin and Neidell (2014).35 Mean maximum temperatures from the IGSM-CAM are projected for two future periods (2050 and 2100, 5-year averages centered on those years) at the county level in the CIRA Reference and Mitigation scenarios. The analysis estimates the total labor hours lost in all categories of the labor force and also for workers in high-risk industries (most likely to be strongly exposed to extreme temperature), taking into account the CIRA county-level population projections from the ICLUS model.36 The fraction of workers in high-risk industries is calculated using Bureau of Labor Statistics data from 2003-2007 and is assumed to remain fixed over time for each county.37 The dose-response functions are estimates of short-run responses to changes in weather, and as such do not account for longer-term possibilities, such as acclimation of workers, relocation of industries, or technological advancements to reduce exposure.

The analysis estimates the cost of the projected losses in labor hours based on the Bureau of Labor Statistics’ estimated average wage in 2005 ($23.02 per hour in a 35 hour work week),38 adjusted to 2100 based on the projected change in GDP per capita. A previous version of results shown on this page contained confidence intervals. These have been removed as an error was discovered in their calculation (error did not affect central estimates).

For more information on the CIRA approach for the labor sector, please refer to Graff Zivin and Neidell (2014)39 and Section G of the Technical Appendix for this report.