The ocean absorbs about one quarter of the CO2 released into the atmosphere by human activities, primarily from the combustion of fossil fuels. Although the ocean’s ability to absorb CO2 prevents atmospheric levels from climbing even higher, measurements made over the last few decades have demonstrated that marine CO2 levels have risen, leading to an increase in acidity (Figure 1).12 Ocean acidification is projected to adversely affect a number of valuable marine ecosystem services by making it more difficult for many organisms to form shells and skeletons.13 Some shellfish are highly vulnerable to ocean acidification14 and any impacts to these species are expected to negatively affect the economy. Certain species have high commercial value; for example, each year in the U.S., oysters, clams, and scallops supply 170 million pounds of seafood valued at $400 million.15 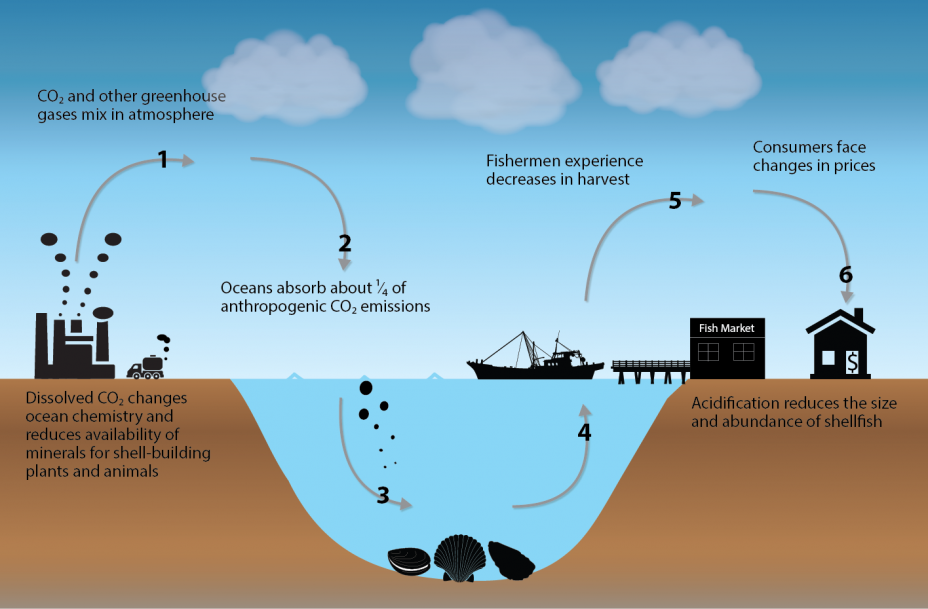 The pace of ocean acidification is accelerating. Since the Industrial Revolution, the average pH of surface ocean waters has fallen by 0.1, representing a nearly 30% increase in acidity.16 Under the Reference scenario, ocean acidification is projected to cause pH to drop an additional 0.3, representing a 100% increase in acidity from pre-industrial times. Continued ocean acidification is estimated to reduce the supply of oysters, scallops, and clams in 2100 by 45% (13 million pounds per year), 48% (21 million pounds), and 32% (31 million pounds), respectively (Figure 2). These decreases in supply are projected to result in price increases by 2100 of approximately $2.20 (a 68% increase from 2010), $9.10 (140%), and $1.30 (123%) per pound, respectively, and lead to consumer losses of roughly $480 million per year by the end of the century. These projections are consistent with the findings of the assessment literature, which describe reduced growth and survival of U.S. shellfish stocks due to unmitigated ocean acidification.17

Reducing global GHG emissions can mitigate the ecological and economic impacts of ocean acidification. Figure 2 shows how the supplies of oysters, scallops, and clams are projected to fall with ocean acidification under the Reference and Mitigation scenarios. Although supplies are estimated to decrease under both scenarios relative to present-day supplies, the Mitigation scenario avoids a majority of the impacts, particularly for clams. In 2100, global GHG mitigation is projected to avoid the loss of 54 million pounds of oysters, scallops, and clams, or 34% of the present-day U.S. oyster supply, 37% of the scallop supply, and 29% of the clam supply.

Figure 2 also indicates how the increase in demand and the decrease in supply are estimated to affect prices by 2100 for these shellfish under the two scenarios. Consumers are likely to substitute away from these shellfish as their prices increase, but not entirely, and not without some decrease in satisfaction. The Mitigation scenario keeps prices much closer to current levels, as indicated in Figure 2, resulting in smaller consumer losses in the shellfish market. In 2100, the benefits to shellfish consumers from global GHG emissions reductions under the Mitigation scenario are estimated at $380 million. The cumulative benefits over the century are estimated at $1.9 billion (discounted at 3%). 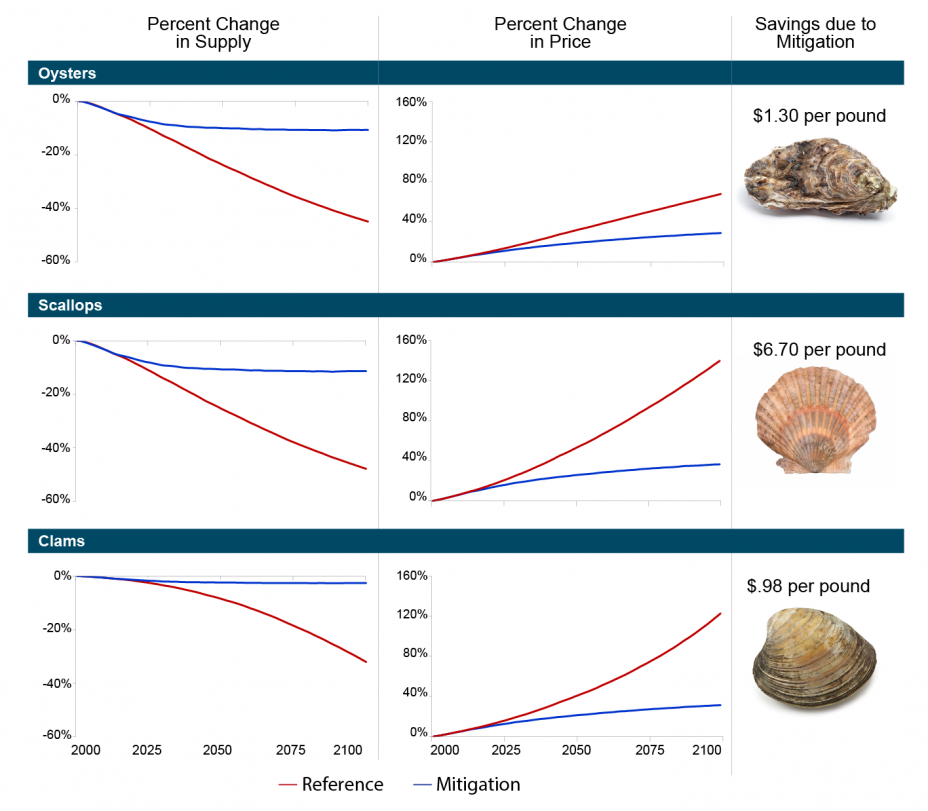 Projected changes in the supplies and prices of oysters, scallops, and clams through 2100 under the Reference and Mitigation scenarios relative to the base period.

The CIRA analysis models the entire “impact pathway” shown in Figure 1, which can be divided into biophysical and economic components. The biophysical impacts are estimated using the CIRA CO2 and sea surface temperature projections from the IGSM-CAM in the CO2SYS model18 to simulate seawater chemistry conditions through the 21st century. These conditions are then used to estimate how the growth rates of oysters, scallops, and clams will change over time.

The economic analysis uses the projected growth rates of these species to estimate changes to the U.S. supply of shellfish. A consumer demand model of the shellfish market, described in Moore (2014),19 projects changes in prices and consumer behavior under the Reference and Mitigation scenarios. This model does not estimate producer or supply-side welfare effects, which could also show benefits of mitigation. Comparing the model results under the two scenarios provides an estimate of the benefits to the shellfish market of avoiding significant amounts of CO2 from being added to ocean waters. By considering impacts to these three species, this approach estimates just a fraction of the potential economic damages from ocean acidification, but, nonetheless, provides some insight into the benefits of global GHG mitigation.

In addition, by preventing the loss of shellfish populations, global GHG mitigation would preserve ecosystem services provided by these species (e.g., water filtration). Inclusion of these effects would likely increase the total benefits of GHG mitigation in this sector.

For more information on the CIRA approach to estimating the economic impacts of ocean acidification in the shellfish market, see Moore (2015).20