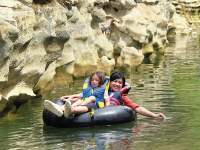 Climate change is likely to have far-reaching effects on water quality in the U.S. due to increases in river and lake temperatures and changes in the magnitude and seasonality of river flows, both of which will affect the concentration of water pollutants. These physical impacts on water quality will also have potentially substantial economic impacts, since water quality is valued for drinking water and recreational and commercial activities such as boating, swimming, and fishing.40,41 The analysis presented in this section estimates changes in water quality, but does not quantify the resulting health effects.

As shown in Figure 1, the WQI across the U.S. is projected to decline in the Reference scenario in 2100 using both the IGSM-CAM and MIROC climate models. Parts of Texas and the Southwest, in particular, are estimated to experience substantial WQI declines of 15-26% in 2100. Projections that climate change will decrease river and lake water quality are consistent with the findings of the assessment literature.43

Percent change in the Water Quality Index in 2100 under the Reference scenario compared to the Control (to isolate the effects of climate change). The WQI is calculated for the 2,119 8-digit hydrologic unit codes (HUCs) of the contiguous U.S., and aggregated to the 18 Water Resource Regions (2-digit HUCs).

Global GHG mitigation is projected to reduce the increase in water temperature that is estimated to occur under the Reference, with corresponding water quality benefits (i.e., avoided degradation) primarily due to better oxygenation. The effects of mitigation on total nitrogen and total phosphorus concentrations vary by region, but the increase in total nitrogen is reduced by up to 80% in some areas of the western U.S. compared to the Reference scenario.

Figure 3 presents the avoided water quality damages in 2100 under the Mitigation scenario compared to the Reference using the IGSM-CAM and MIROC climate models. As shown in the figure, global GHG mitigation is projected to result in economic benefits relative to the Reference across the entire contiguous U.S. California is projected to experience the greatest benefits of mitigation in 2100, ranging from approximately $750 million to $1.0 billion.

Figure 2. Change in U.S. Water Quality Damages with and without Global GHG Mitigation 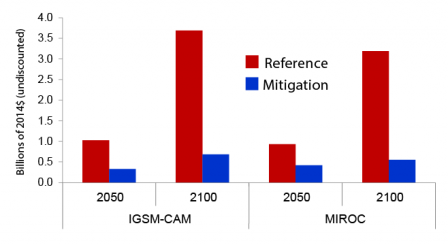 Avoided damages under the Mitigation scenario compared to the Reference in 2100 (millions 2014$). Damages are calculated for the 2,119 8-digit HUCs of the contiguous U.S., and aggregated to the 18 Water Resource Regions (2-digit HUCs).

The CIRA analysis uses a series of linked models to evaluate the impacts of climate change on water quality in futures with and without global GHG mitigation. The analysis relies upon climate projections from two climate models: IGSM-CAM, which projects a relatively wetter future for most of the U.S., and the drier MIROC model. The CIRA temperature and precipitation projections inform a rainfall-runoff model (CLIRUN-II) that estimates river flow.44 A water demand model projects water requirements of the municipal and industrial (M&I), agriculture, and other sectors. The runoff and demand projections inform a water supply and demand model that estimates reservoir storage and release, and in turn produces a time series of water allocations for the various demands. After this allocation step, the analysis relies on the QUALIDAD water quality model to simulate a number of water quality constituents in rivers and reservoirs.45 Changes in overall water quality are estimated using changes in the Water Quality Index (WQI), a commonly used metric that combines multiple pollutant and water quality measures. Finally, a relationship between changes in the WQI and changes in the willingness to pay for improving water quality is used to estimate the economic implications of projected water quality changes.

Results for the CIRA scenarios are compared to a Control to isolate the effect of climate change. See the Water Resourc­es section of this report for information on projected changes in the Inland Flooding, Drought, and Water Supply and Demand sectors. Decreases in water quality due to climate change will likely have an adverse effect on human health due to, for example, the increased risk of harmful aquatic blooms and impacts on sources of drinking water. Human health effects due to decreased water quality are not estimated, but are important consider­ations to fully understand climate change impacts in this sector. Inclusion of these effects would likely increase the benefits of GHG mitigation in this sector.

For more information on the CIRA approach and results for the water quality sector, please refer to Boehlert et al. (2015)46