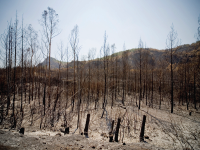 Terrestrial ecosystems in the U.S. provide a wealth of goods and services such as timber, wildlife habitat, erosion management, water filtration, recreation, and aesthetic value. Climate change threatens these ecosystems as heat, drought, and other disturbances bring larger and more frequent wildfires. Wildfires can damage property, disrupt ecosystem services, destroy timber stocks, impair air quality, and result in loss of life.29 In the last decade (2004-2013), more than 72 million acres of forest have burned due to wildfires, and the U.S. government has spent in excess of $15 billion on wildfire suppression.30 Additionally, wildfires release carbon stored in terrestrial ecosystems, potentially further accelerating climate change.31,32

Without GHG mitigation, climate change is projected to dramatically increase the area burned by wildfires across most of the contiguous U.S., a finding that is consistent with the assessment literature.33 Under the Reference using the IGSM-CAM climate projections, approximately 5.3 million34 more acres—an area greater than the state of Massachusetts—are projected to burn each year at the end of the century compared to today. This represents a doubling of acres burned compared to today’s rates.35 However, the estimated impacts vary across regions and through time (Figure 1). Consistent with the assessment literature,36 the western U.S.37 is projected to experience large increases in burned area by the end of the century (an increase of approximately 43%). In particular, the Southwestern region (comprising Arizona, New Mexico, and West Texas) is projected to experience increases of 140% on average.38 Wildfire in other regions is not projected to change significantly compared to today, and some regions, such as the Northeast, are estimated under the IGSM-CAM projections to experience decreases in wildfire activity.

Change in average annual acres burned under the Reference scenario by mid-century (2035-2064) and end of century (2085-2114) compared to the historic baseline (2000-2009) using the IGSM-CAM climate model. Acres burned include all vegetation types and are calculated at a cell resolution of 0.5° x 0.5°.

As shown in Figure 2, global GHG mitigation significantly reduces the area burned by wildfire in the U.S. over the course of the 21st century. By 2100, the Mitigation scenario reduces the cumulative area burned by approximately 210-300 million acres, depending on the climate model used. This corresponds to a 13%-14% reduction relative to the Reference. As shown, the combined area of wildfires avoided in the contiguous U.S. due to GHG mitigation is equivalent to two to three times the size of California. These benefits of GHG mitigation largely occur in the West, where approximately 64%-75% of the avoided burned area is located. 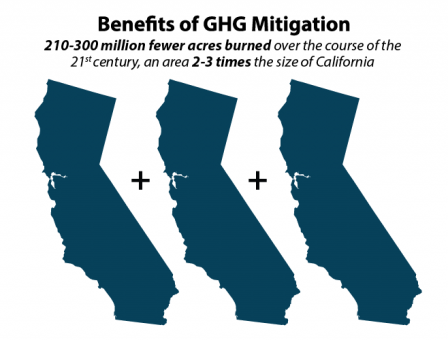 Nationally, the avoided wildfire due to GHG mitigation corresponds to $11 billion in reduced wildfire response costs and $3.4 billion39 in avoided fuel management costs for conservation lands through 2100 (both discounted at 3%). Other economic damages from wildfire that are not estimated in this analysis, such as human health effects from decreased air quality, could have large implications at national and regional scales. These results rely upon climate projections from the IGSM-CAM, which projects a relatively wetter future for most of the U.S. compared to the MIROC climate model (see the Levels of Certainty section of this report for more information). The projected benefits of global GHG mitigation are slightly lower for the drier MIROC model, with wildfire response cost savings estimated at $8.6 billion through 2100 (discounted at 3%).40

Figure 2. Estimated Acres Burned with and without Global GHG Mitigation 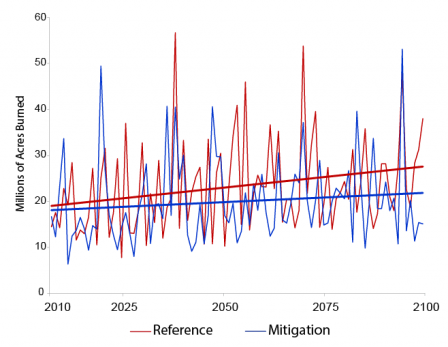 Estimated acres burned by wildfire in the contiguous U.S. over the course of the 21st century under the Reference and Mitigation scenarios using the IGSM-CAM climate model, with trends shown in bold. The large inter-annual variability reflects simulated periods of fuel accumulation followed by seasons of large wildfire activity.

To estimate the effect of climate change on areas burned by wildfires, the CIRA analysis uses the MC1 dynamic global vegetation model. The model simulates future terrestrial ecosystem cover and burned area across the contiguous U.S. in the 21st century. The vegetation model is driven by changes in future climate (e.g., temperature, precipitation, humidity) based on five initializations of the IGSM-CAM climate model for the Reference and Mitigation scenarios.41,42 Results presented in this section represent the average of the initializations. Simulations using the drier MIROC model were also performed. Projected changes in fire regime over time are adjusted to account for fire suppression tactics.

The projected impacts of wildfires are summarized by scenario and geographic area, and then monetized using average wildfire response costs for each region. These costs include the costs associated with labor (e.g., fire crews) and equipment (e.g., helicopters, bulldozers) that are required for fire-fighting efforts.43 Using the approach described in Lee et al. (2015),44 the analysis also estimates the environmental damages resulting from moderate and severe wildfires on conservation lands (e.g., Forest Service lands, national parks and preserves, and other protected lands) across the contiguous U.S. under the Reference and Mitigation scenarios. To estimate the value of the lost ecosystem services resulting from these wildfires, the analysis quantifies the costs of fuels management needed to offset the injury caused by wildfires. Air quality impacts, property loss, loss of recreation, and the effects of pest infestations (e.g., pine bark beetles) on wildfire activity are additional and important impacts, but are not included in the reported estimates.