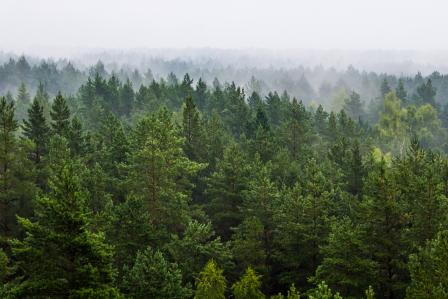 The purpose of this research is to better understand the vulnerabilities of natural communities to the combined effects of atmospheric deposition and climate change, and to make key advances in the science and application of critical loads research.

Summary of the Research

Researchers have developed three research efforts to advance the understanding of impacts from N and S deposition on ecosystems, and how future climate scenarios may interact with N and S deposition to affect forested communities and the ecosystem services they provide. Specifically, these projects are:

Project 1: Ecological vulnerability to N and S deposition from 1800-2025 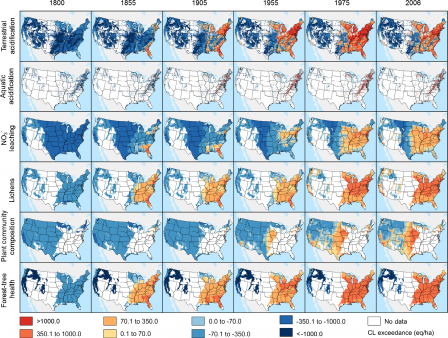 Figure 1: Geographic variation in exceedances of the six critical loads examined in this study from 1800-2006 (illustrative decadal averages are shown centered on the intervening year; e.g. “1955” represents the average from 1950-1959).

Quantifying and clarifying trends in terms of where, when, and by how much N and/or S deposition is above a critical load – referred to as an exceedance – is critical to helping decision makers better understand ecological vulnerabilities to atmospheric deposition. This project sought to better understand what critical loads were exceeded, where in the contiguous U.S. (CONUS) those exceedances occurred, and when those exceedances occurred either historically (i.e. 1800-2011) or projected into the near future (i.e. 2025)i.e. 2025).[1] To conduct this analysis,  we overlaid critical load information from the National Critical Loads Database (NCLD) for six critical loads[2], with atmospheric deposition estimates from 1800-2025 from a variety of sources.[1]

There were several overarching findings from this study:

In total, this effort demonstrated that many critical loads have been exceeded for decades in the U.S., and are likely to remain so in the short term under current policies. Additional improvements to the methodology were also identified including:

Soil acidification can come from N, S, or both, and is a major potential impact of atmospheric deposition. It can lead to a cascade of negative ecological impacts, including increased aluminum concentrations in the soil (which is harmful to plants), nutrient imbalances in plant tissue, damage to root biomass, and overall reduced forest tree health, vitality, and regeneration rates of seedlings.

The most important factor contributing to estimates of the critical loads for acidification, is the base cation weathering rate (BCw), which describes the natural replenishment of base cations to the soil that can buffer acidity. It was discovered during the 2008 Risk and Exposure Assessment for the NOx and SOx secondary standards, that the primary method for estimating BCw was only valid for glaciated soils, and thus was not valid for roughly 75% of the contiguous U.S.

EPA began to develop a method to estimate BCw across the CONUS, and apply that method to update the critical loads for soil acidification in the U.S. This built off an important pilot project in Pennsylvania, which used the dynamic soil model PROFILE.[5]

There were eight different sources of uncertainty in PROFILE evaluated under different simulation “activities”, and researchers found that four of them had a significant effect on BCw:

EPA found these uncertainties had a large effect on BCw (and the critical load for acidification by extension), affecting BCw by -95% to +300% in some cases. These had not been accounted for in the Pennsylvania pilot project, but will be accounted for in the follow-on work.

Key results of the uncertainty analysis and a plan for reducing those uncertainties were published in a peer reviewed publication,[6] and helped lay the foundation for ongoing work to improve estimates of critical loads of soil acidification and reducing uncertainties. Once completed (expected summer 2019), EPA researchers will have greatly improved estimates for BCw in the U.S., and thus a much-improved understanding of the degree of terrestrial acidification in the U.S. 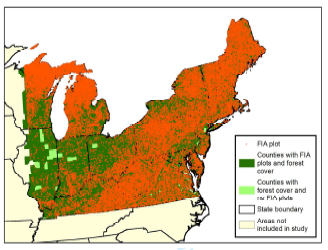 This project focused on a 19-state area in the Northeastern U.S. where EPA  had information on species-level responses to N deposition (Figure 3) from a large-scale analysis conducted by Thomas et al. (2010).[7] Researchers combined these species-level responses to N deposition and climate change, with future estimates of N deposition and climate change from a variety of sources, to project how forest composition in the Northeastern U.S. may change from 2005 to 2100. Once these changes in forest composition were generated, they calculated how three ecosystem services may be affected: (1) timber, (2) carbon sequestration, and (3) forest tree diversity

Overall, there were more trees that benefitted than were harmed with higher levels of N deposition and changes in climate, because more abundant species tended to be less vulnerable, and less abundant species tended to be more vulnerable. This led to increases in timber and carbon sequestration overall for the Northeastern U.S. with elevated N deposition and larger changes in climate, despite a reduction in the biomass of many individual species. 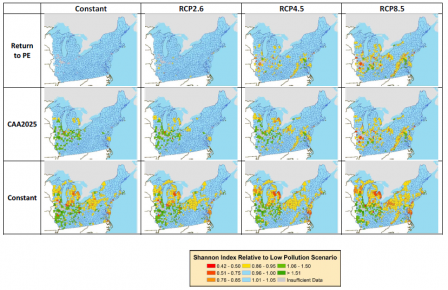 Figure 4: Tree diversity responses by county in 2100 relative to the reference (low pollution state: return to pre-European deposition and constant climate). Colors indicate a relative increase (green) or decrease (red) in tree diversity.Tree biodiversity, however, showed complex regional and stressor-specific variation (Figure 4). More climate change generally led to decreases in tree diversity, whereas more N deposition led to increased diversity in parts of the Central Midwest and decreased diversity in the Northern Midwest and East and along the Appalachian Range.

In addition to the three ecosystem services described above, EPA summarized what is known about many other ecosystem services provided by all 24-species assessed using information from the U. S. Forest Services’s (USFS) Fire Effects Information System (FEIS).Exit This summary clearly shows that there are many other services these species provide (e.g. furniture, musical instruments, habitat for protected species, medicinal value, etc.). Many of these are difficult to quantify with the same degree of rigor as the three focused on here, but qualitative assessments are possible.

This work also contributes significantly to improving modeling tools and information that form the basis for global and national assessments of climate change, such and the National Climate Assessment led by the US Global Change Research Program.Exit This helps us better understand which tree species are vulnerable to climate change and where they are most vulnerable now and in the future.

[7] See Thomas, R. Q., et al. (2010). "Increased tree carbon storage in response to nitrogen deposition in the US." Nature Geoscience 3(1): 13-17. It is thought that species are more similar in their negative responses to S.