Background on the Science 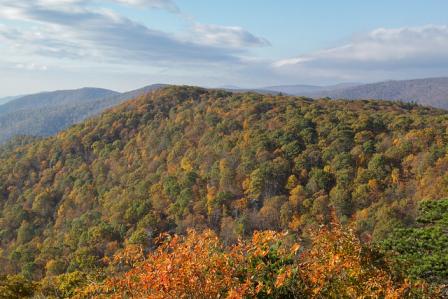 The largest stressors to terrestrial ecosystems and biodiversity worldwide have been shown to be land use change, climate change, and atmospheric deposition of nitrogen (N) and sulfur (S). Land use change can directly destroy habitat for wild organisms, or indirectly impair remaining habitat through fragmentation and other effects. Climate change can cause an increase or decrease in plant growth, alterations in species distributions, and changes in biogeochemical cycling and runoff patterns.

Nitrogen deposition is an especially complex stressor as it can have a variety of positive and negative effects. It can cause increased plant growth, decreased plant biodiversity, soil acidification, increased invasive species, increased damages from pests and frost, and increased N leaching to water bodies.

Nitrogen deposition and climate change can also have interacting effects: N deposition can release systems from nutrient limitations that can lead to plant growth potentially enhancing their responsiveness to changes in climate.[1] Alternatively, elevated concentrations of carbon dioxide (CO2) can increase nutrient limitation, increasing the effect of a given amount of N deposition. How these two stressors interact needs to be more fully understood and can help decision makers prioritize remediation and adaptation efforts.

Summary of the Research

Merging model improvements at both of these scales will provide a flexible modeling framework to examine how these two major stressors may influence the environment now and in the future. 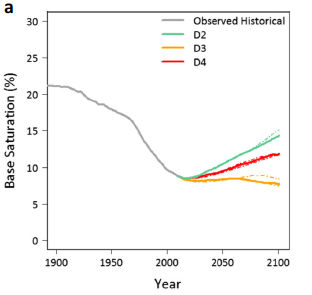 Many large-scale Earth system models, like those used for Intergovernmental Panel on Climate Change (IPCC) reports, do not model species. Instead, they model groups of species or habitat types (e.g. deciduous forests and grasslands). These groupings are not internally homogenous, and are made up of hundreds, if not thousands, of individual species. To assess species-level impacts from nitrogen deposition and climate change, a more refined modeling system is needed. EPA researchers reviewed several different modeling platforms and selected two as the most promising candidates for additional examination in the U.S.: the Forest-Safety-Vegetation model (ForSAFE-VEG[2]), and the augmented Very Simple Dynamic soil biogeochemistry model (VSD+) coupled with the model Predicting the Occurrence Probabilities of Plant Species (PROPS) (i.e. VSD+PROPS[3]).

Both of modeling chains are leading approaches, and currently used in Europe to assess the impacts from atmospheric deposition and climte change on plant biodiversity, as a portion of  the European commitments 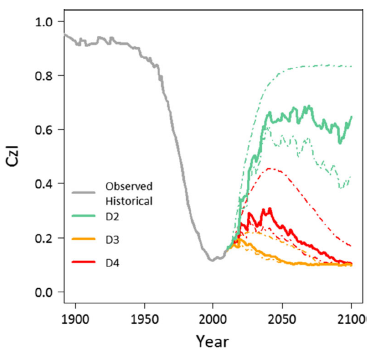 In testing the feasibility of the ForSAFE-VEG model for use in the Northeastern U.S., researchers calibrated and validated the model at two field sites with sufficient data requirements (i.e. Hubbard Brook Experimental Forest, NH, and Bear Brook Experimental Forest, ME). Once calibrated[4], the models were used to project effects of climate change and nitrogen deposition from 1900-2100 on soil chemistry, nitrate leaching, and plant biodiversity at these two sites[5] and then across the Northeast.[6]

The study on the two focal sites[5] showed that soil solution chemistry was expected to only partially recover in the future with anticipated reductions in N deposition, and that climate change had a weaker effect on soil solution chemistry as compared with N deposition. The plant community, on the other hand, was sensitive to both stressors, and was not expected to recover unless under the most optimistic scenarios. (i.e. least climate change and lowest N deposition.

This project revealed that the reversibility of impacts from historical N deposition may be slower and more challenging than anticipated, and that climate change was projected to aggravate ecosystem recovery. The project also uncovered two key limitations in the approach. First, ForSAFE-VEG is very data intensive, and thus could not be deployed over more than a few dozen sites in the U.S., which may or may not be representative of the entire country. Thus, it became apparent that it would be difficult to develop niche parameters for all plant species of concern across the U.S. without a much larger effort in partnership with other federal and state agencies. Second, the performance of the ForSAFE-VEG model in accurately simulating the observed plant community required significant model tuning, which was difficult to independently validate.

Researchers decided to examine the feasibility of the second model, VSD+PROPS, which had never been applied in the U.S. Species response curves in PROPS are based on empirical observations of species distributions. This compares to ForSAFE-VEG, which is based on expert botanists assessing the range of conditions where the species could be found. To build the U.S. species-database for VSD+PROPS, researchers relied on the database that had been developed by EPA on the relative abundances of plants in ~15,000 plots across the U.S.[7] From this database, researchers were able to build species niches for 327 species at a fraction of the effort for ForSAFE-VEG (Figure 2).

Researchers then used VSD+PROPS to simulate responses of the soil chemistry and plant community to scenarios of N deposition and climate change from 1850-2100 for three sites: Hubbard Brook Experimental Forest (also had ForSAFE-VEG), Cosby 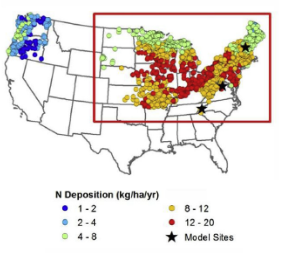 The success of the feasibility study for VSD+PROPS was encouraging, but not without caveats. VSD+PROPS could be run on a gridded national level much more easily than ForSAFE-VEG, however, evaluation of PROPS also revealed limitations (e.g. not enough data at the low deposition range for this region with which to estimate what may occur if deposition declined) that need improvement before the model can be used on a widespread basis.  Researchers are currently modifying the modeling approach to address these limitations.

The combination of the ForSAFE-VEG and the VSD+PROPS research efforts has greatly advanced the capacity in the U.S. for simulating the interactive effects from climate change and nitrogen deposition on terrestrial ecosystems and biodiversity. Though some significant hurdles remain before deployment to support decision making, EPA researchers are working to further develop these new tools to better understand the interactive effects from N deposition and climate change to lay the foundation for other stressors to be included in the future.

Earth-System-Models (ESMs) simulate coupled systems at a global scale, including biogeochemical cycling, hydrology, atmospheric dynamics, and ocean circulation patterns. These models feed into the Intergovernmental Panel on Climate Change (IPCC) Assessment Reports that inform the public, decision makers, and scientists, on the “state-of-knowledge” of regional and global climate change.

It has become increasingly appreciated that we cannot accurately simulate the effects of climate change and the global carbon cycle without the inclusion of the nitrogen cycle in these ESMs. This is because nitrogen typically limits plant productivity, which can lead to important feedbacks at the land-atmosphere interface that affect many global systems. Nonetheless, in the most recent Fifth Assessment Report by the IPCC, there was only one ESM that included an integrated nitrogen-carbon cycle – the Community Land Model version 4 (CLM.v4).[9] Although the CLM v.4 was an improvement over other models due to the inclusion of a global nitrogen cycle, it was known to be simplistic, and lacked many characteristics important to the observed nitrogen cycle. EPA researchers identified this as a critical knowledge gap in the understanding of future effects of climate change, and initiated a collaboration with the National Center for Atmospheric Research (NCAR) to support the improvement of the CLM. 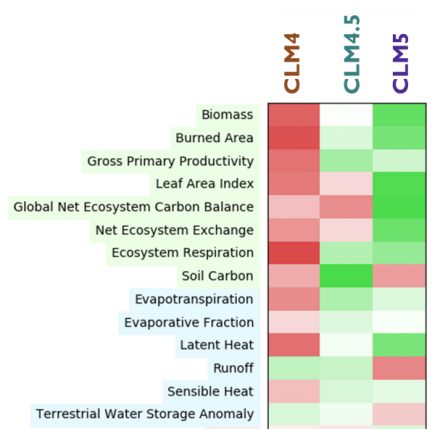 Figure 3: Improvement in the CLM from the ILAMB[11] comparison project for CLM4, CLM4.5, and CLM5 (greener is better). There were three critical areas NCAR idenfitied for improvement:

Together, these improvements more mechanistically represent plant nitrogen dynamics in the newest version of the CLM (i.e. CLM.v5) and afford opportunities to understand, refine, and improve simulated C-N biogeochemical dynamics for the U.S. and the globe.

Simulations have been completed and demonstrated improved performance of the CLM.v5 compared with earlier versions (Figure 3). Another insight of the improved N-C coupling is that the responsiveness of the terrestrial ecosystem to elevated N is greatly diminished compared with earlier models, suggesting a reduced capacity for the land to absorb excess CO2 under elevated N deposition (Figure 4). Thus, older versions of the model projected the terrestrial system could absorb more CO2 under elevated N deposition than in actuality, suggesting a reduced capacity for natural systems to mitigate emissions.

NCAR researchers are finalizing the model output for publication in a special issue.[10] This output will form a critical component of the U.S. contribution for the next IPCC report (AR6) planned for release in 2020-2021. Another insight of the improved N-C coupling is that the responsiveness of the terrestrial ecosystem to elevated N is greatly diminished from earlier models, suggesting a reduced capacity for the land to absorb excess CO2 under elevated N deposition. 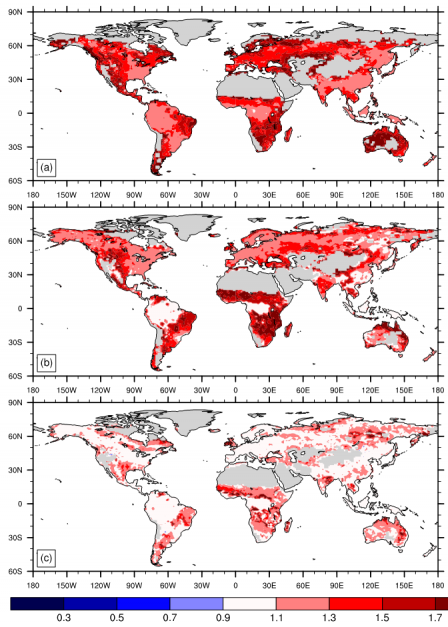 Figure 4: Gross primary production response of the CLM family of models to elevated N (+50 kg N ha-1 yr-1) for the CLM4 (a), CLM4.5 (b), and CLM5 (c). There were several next steps identified to further improve the CLM and explore model projections, including:

With these additional improvements, the CLM will be able to simulate with increased confidence the interactive effect of climate change and nitrogen deposition on air and water quality in the U.S.

[9] The CLM.v4 was developed by the National Center for Atmospheric Research (NCAR) as the land component of the Community Earth System Model (CESM).