Factsheet: Click to download These gases play a vital role in the manufacture of flat panel displays, namely liquid crystal display (LCD) panels that go into televisions, computer monitors, and many other display products. The overall climate impact of the millions of display products Americans use can be greatly reduced if suppliers of these components take steps to reduce releases of these F-GHGs to the atmosphere.

What are F-GHGs and How are They Used in Panel Manufacturing?

Other Gases Used in FPD Manufacturing

F-GHGs are not the only greenhouse gases used in panel production. For example, N2O, which has an atmospheric lifetime of 114 years and a 100-year global warming potential of 298, is used during deposition to place materials (e.g., glass, metals, chemicals) onto glass. Stakeholders are currently learning more about the impacts of N2O and other gases in panel production.

Fluorinated GHGs such as certain perfluorocarbons (e.g., CF4, C2F6, C4F8), trifluoromethane (CHF3), nitrogen trifluoride (NF3), and sulfur hexafluoride (SF6) are among the most potent greenhouse gases (GHGs), with some persisting in the atmosphere for thousands of years, effectively causing irreversible impacts on the earth's climate system. These gases have extremely high global warming potentials, or GWPs, which is a metric used to quantify the impact that a gas has on the climate; a higher GWP means a higher impact.

F-GHGs are commonly used in many types of electronics manufacturing, including the manufacture of flat panel displays, semiconductors, micro-electro-mechanical systems, light emitting diodes, and photovoltaic cells.

Flat panel displays are made up of a series of layers. Layers underneath the screen on the front of a flat panel display have grids of millions of tiny transistors created by depositing and etching materials (e.g., glass, films made up of various metals and chemicals). These layers are produced in manufacturing areas called deposition tool chambers. Flat panel display manufacturers—namely those that produce the panels used in products such as televisions, computer monitors, tablets, and mobile phones—use various F-GHGs during panel production. These gases, which are highly effective in their performance, are used in several panel production processes, including:

See Table 1 for some of the process chemicals used by the industry and the environmental impact of the gases if released to the atmosphere.

During manufacturing of flat panel displays, a portion of F-GHGs pass through the manufacturing tools unreacted and are released into the atmosphere.[1] A portion of the F-GHGs used in processes may also react in chambers to form by-product emissions of other F-GHGs. In addition, F-GHGs can be emitted from equipment cooling processes through evaporation.

The magnitude of emissions can vary depending on a number of factors including: the specific gas used, the type and brand of equipment used, company-specific process parameters, and the number of F-GHG-using steps in a production process. Companies' manufacturing processes and, consequently, emissions also vary across flat panel manufacturing fabrication facilities, also called “fabs”. 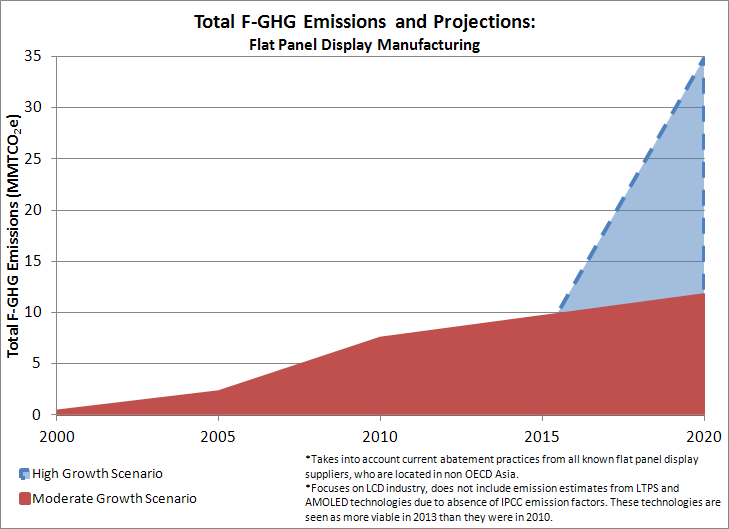 How can F-GHGs be Reduced?

Over the last decade, electronics manufacturers have made significant progress in identifying effective technological solutions to reduce F-GHG emissions. The following approaches to reducing F-GHG emissions resulting from flat panel manufacturing are in use today or are currently being explored:

What is the Industry Doing to Reduce F-GHGs?

Over the last decade, major flat panel suppliers have taken voluntary steps to reduce their F-GHG emissions. For example, in 2001, the World Display Industry Cooperation Committee (WDICC)—including the LCD industry associations in Korea, Taiwan, and Japan—agreed to voluntary reduction activities and set a goal to reduce F-GHG emissions to 0.82 MMTCE by 2010. They estimated that these reductions represented one tenth of their anticipated emissions, effectively reducing 2000 baseline levels by approximately 90 percent. [2][3]

To meet the reduction goal, many suppliers in participating countries implemented strategies to address their emissions including installing abatement technologies on production lines in their newer generation fabs, namely those built within the last decade. As a result, F-GHG emissions were reduced by 10.1 MMTCE, to where aggregate emissions totaled 1.75 MMTCE. Though these reductions demonstrated significant accomplishments, the WLICC fell short of its goal due to a rise in emissions resulting from a rapid increase in production for LCD panels that were integrated into products such as televisions faster than initially anticipated. [3]

Since the WDICC set its initial goals, newer suppliers with growing market share have also emerged and information on their F-GHG emissions reductions efforts is currently unknown. In addition, it appears that some key suppliers are still in varying stages of implementing comprehensive F-GHG emission reductions efforts across their fabs. As worldwide demand for flat panels, namely LCDs, continue to increase, F-GHG emissions are also projected to rise. To mitigate those emissions, it is important that reduction efforts across all major panel suppliers are implemented.

In late 2015, LCD suppliers who were members of the World Display Industry Cooperation Committee (WDICC) committed to a new goal of reducing F-GHG emissions intensity by 30% by 2020. EPA commends LCD suppliers for taking this important step to further reduce F-GHG emissions. Also, beginning in late 2015, the IEEE 1680.1 standard denoting improved environmental performance for computers and monitors, which also underpins the Electronic Product Environmental Assessment Tool (EPEAT) used in institutional procurement, began its revision. One of the criteria stakeholders are examining at the time of this writing would reward reducing F-GHGs from LCD manufacturing.

What are Individual Suppliers Doing to Reduce F-GHG Emissions?

The Supplier Profiles below detail the efforts of large-area flat panel suppliers to reduce their F-GHG emissions in manufacturing across key areas. The profiles cover mitigation measures and goals, the extent of reduction efforts (whether they include all processes and gases used), the extent to which abatement technologies are installed on newer fabs that manufacture large area panels, and public disclosure efforts.

How can Brands, Retailers, and Large Buyers Contribute to F-GHG Reduction Efforts?

Product assemblers and retailers can play an important role in reducing the climate impacts of the products they sell by sourcing from suppliers with a demonstrated commitment to reducing F-GHG emissions.

For example, over the past few years, brands and retailers Walmart, Dell, HP, Lenovo, Best Buy, and Acer took an important public step to foster further voluntary F-GHG reductions among their LCD suppliers. These companies asked their LCD suppliers to develop a standard method for measuring and recording F-GHG emissions for the industry, establish a voluntary long-term F-GHG emissions reduction goal with public timelines for demonstrating progress, and develop an annual progress report that can be shared with them and/or other supporting organizations. Since then, other brands have followed suit by engaging their LCD suppliers to better understand their F-GHG emissions and efforts to reduce them.

It is important to note that currently it is difficult and unadvisable to try to compare panel suppliers' F-GHG emissions due to a lack of consistency in estimating emissions, estimating emissions reductions, and monitoring the efficacy of installed abatement systems. Therefore, panel purchasers can use the following set of questions as a starting point to help understand how their panel suppliers are reducing their F-GHG emissions and identify opportunities for discussions to target and implement further mitigation efforts.

For more than twenty years, EPA has worked collaboratively with the high-tech electronics industry to identify strategies for reducing greenhouse gas emissions resulting from its operations and from the products it creates for consumers.