What are Coral Reefs?

Coral reef ecosystems are intricate and diverse collections of species that interact with each other and the physical environment. Coral is a class of colonial animal that is related to hydroids, jellyfish, and sea anemones.

Stony corals, a type of coral characterized by their hard skeleton, are the bedrock of the reef. Stony coral colonies are composed of hundreds of thousands of individual living polyps. Polyps are capable of drawing dissolved calcium from seawater, and solidifying it into a hard mineral (calcium carbonate) structure that serves as their skeletal support. When you look at a coral colony, only the thin layer on its surface is live coral; the mass beneath is the calcium carbonate skeleton that may be decades old. 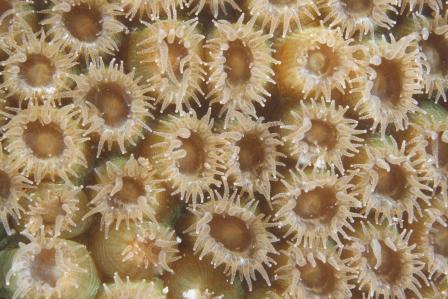 A group of the individual coral polyps that make up a stony coral colony. Photo credit: Charles LoBue/EPA.The slow growth of polyps and expansion of the hard skeletal structures build up the permanent coral reef structure over time.

Polyps of reef-building corals contain microscopic algae called zooxanthellae, which exist with the animal in a symbiotic relationship. The coral polyps (animals) provide the algae (plants) a home, and in exchange the algae provide the polyps with food they generate through photosynthesis. Because photosynthesis requires sunlight, most reef-building corals live in clear, shallow waters that are penetrated by sunlight. The algae also give a coral its color; coral polyps are actually transparent, so the color of the algae inside the polyps show through.

Coral reefs provide habitat for a large variety of marine life, including various sponges, oysters, clams, crabs, sea stars, sea urchins, and many species of fish. Coral reefs are also linked ecologically to nearby seagrass, mangrove, and mudflat communities. One of the reasons that coral reefs are so highly valued is because they serve as a center of activity for marine life.

Not all corals on the reef are stony corals.

Some soft corals have zooxanthellae to acquire food and energy, but others, such as black corals, exist without this symbiotic relationship.

Where are Coral Reefs Found?

Corals can be found throughout the world’s oceans, in both shallow and deep water. However, the reef-building corals that rely on a symbiotic relationship with algae need shallow, clear water allowing light penetration for photosynthesis. Stony corals also require tropical or sub-tropical temperatures, which exist in a band 30 degrees north to 30 degrees south of the equator.

Coral reefs exist in seven U.S. states and territories, including:

There are also coral reefs 100 miles offshore of Texas and Louisiana in the Gulf of Mexico, living on the tops of geologic ‘mesas’.

Why are Coral Reefs Important?

Coral reefs are among the most biologically diverse and valuable ecosystems on Earth. An estimated 25 percent of all marine life, including over 4,000 species of fish, are dependent on coral reefs at some point in their life cycle. Approximately half a billion people globally depend on coral reef ecosystems for food, coastal protection, and income from tourism and fisheries.

All of the services provided by coral reefs translate into tremendous economic worth. By one estimate, the total net benefit per year of the world’s coral reefs is $29.8 billion. Tourism and recreation account for $9.6 billion of this amount, coastal protection for $9.0 billion, fisheries for $5.7 billion, and biodiversity, representing the dependence of many different marine species on the reef structure, for $5.5 billion (Cesar, Burke and Pet-Soede, 2003).