EPA research is targeted to the protection of corals and sustainability of coral reef ecosystems. These goals have guided investigations across a broad range of science needs, including:

As each data gap is narrowed, EPA is closer to identifying reefs at risk, isolating causes for reef decline, and assisting jurisdictions to make management decisions that will better protect reefs now and into the future.

EPA’s mission under the Clean Water Act (CWA) is to protect and restore the chemical, physical, and biological integrity of the nation’s waterbodies. These waterbodies include marine coastal zones within territorial waters (usually three miles or more from shore) where many of our coral reef ecosystems occur. Most often, water quality is protected under the CWA by setting limits, through water quality criteria, on the presence and amount of chemical and physical stressors. The CWA also identifies water quality criteria based on the biological condition of the organisms inhabiting the waterbody, such as coral reef organisms. Biological water quality criteria use the condition of the organisms to determine whether or not a waterbody is protective of human health, fish, wildlife, and recreation in and on the water (CWA §101). 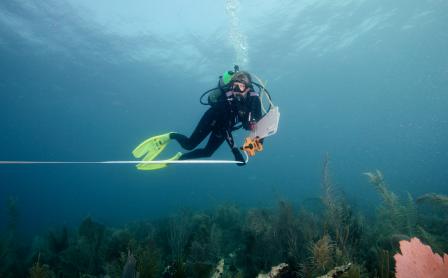 EPA diver taking a variety of measurements on multiple coral reef organisms. Photo credit: Charles LoBue/EPA.Biological water quality standards are less often used in regulatory management but biological condition is a valuable reflection of water quality because the health of an organism is determined by the cumulative effects of multiple stressors over time. This is clearly an issue for coral reefs, which face threats from ocean warming, acidification, physical damage, and land based pollutants such as sediment, nutrients, and contaminants.

All three challenges are being addressed through research conducted at EPA.

Establishing biological water quality standards requires testing and validating measures of biological condition that represent, or indicate, the effects of human disturbance on corals. This is because the CWA is not intended to protect waterbodies from natural changes, only from changes created by human activities.

Many of the traditional biological measurements made on coral reefs have never been tested to determine whether they were good indicators of human disturbance. A good indicator for the CWA is one that is not only easily measurable and interpretable, but sensitive to the effects of human activities over natural changes.

EPA scientists have used two different approaches to test CWA indicators. In one approach, they made coral measurements in an area of high human activity, an industrial area and shipping dock in the U.S. Virgin Islands, to compare with the same measurements made progressively further away from the industrial area. Those measurements showed a positive change in condition further away from the center of disturbance, and were considered good indicators of human activity.

Using another approach, EPA scientists made the same biological measurements in the coastal zones offshore of each watershed on the U.S. Virgin Island of St. Croix. They also used land use maps to quantify the amount of human development (such as homes, farms, shopping malls, and roads) within each watershed. Those measurements that showed a positive increase at watersheds with lower human development were considered good indicators of human activity.

The results of these studies validated several different coral reef measurements as useful CWA indicators, some through both approaches. The validated indicators can be used to characterize coral condition and to defensibly represent the effects of human activity on corals.

Once indicators of human disturbance are identified and validated, then survey and monitoring protocols have to be developed that address the question of biological integrity as required by the CWA. There are many compromises that have to be made in a monitoring program. It is never feasible to make every measurement on every organism. This challenge is further complicated for coral reefs because measurements have to be made under water, the presence of reefs are patchy and the areas of concern are relatively large regions, like the island of St. Croix, the southern coast of Puerto Rico or the Florida Keys.

Over the course of several years, EPA scientists have developed a protocol and survey approach that allows multiple biological measurements in a manner efficient enough to sample sixty or more stations in just two weeks. Using a probability-based survey design pioneered by EPA’s Environmental Monitoring and Assessment Program, data from sixty randomly-selected stations is all that is needed to represent the coral reef condition of a large region.

The sampling protocol includes measurements on reef fish, stony corals, sponges, gorgonian octocorals (soft corals), and other invertebrates, as well as documentation of coral diseases and bleaching, which are signs of stress. Many of the measurements are used to calculate indicators that represent the effects of human activity on the reef. Other measurements are used to estimate benefits of the reef to human society. For example, measurements of the size and number of stony corals can be used as indicators for fishery habitat provision, tourism opportunities or shoreline protection from storm events.

EPA scientists have applied the protocol and survey design at multiple locations, including Southeast Florida, Puerto Rico, U.S. Virgin Islands and the Flower Garden Banks off the coast of Texas. Several of the protocols have been adopted by other coral reef monitoring programs, notably the National Oceanic and Atmospheric Administration’s National Coral Reef Monitoring ProgramExitand The Nature Conservancy’s Florida Reef Resilience Program.

With data in hand from reef assessment surveys, and indicators calculated, the next step is to determine what a good condition is and what it is not. EPA scientists have convened multiple workshops with coral reef experts to examine photographs, videos and data from scores of sampling stations to develop some criteria for interpreting the data and indicators. At first the experts agreed on four categories of condition, very good, good, fair and poor. After multiple meetings, conversations and discussions they eventually agreed to as many as six levels of condition (rated 1 through 6 from high to low condition) based on the Biological Condition Gradient (BCG) which is a conceptual framework to link resource condition to the severity of human-generated stress.

Using the BCG as a conceptual backdrop, the experts were able to quantitatively describe what they expected to see in a reef with minimal human disturbance (reference conditions), how that might have changed over the last several decades (baseline shifting) and management goals for restoration of reefs that are of only fair or poor quality.

The ‘rules’ for determining whether reef condition is good or poor have been developed initially for reef fish and stony coral assemblages. For example, a reef in very good condition would have large reef-building stony corals with several species that are known to be intolerant to stressors. The same reef would be expected to have a large number of fish representing several different species and including some of the rarer species such as large groupers. These positive reef attributes would decline at reefs with poor condition and might be replaced with higher presence of macroalgae and small, or even invasive fish species.

The Corals and Climate Adaptation Planning (CCAP) project is a collaborative effort of the Climate Change Working Group of the U.S. Coral Reef Task Force. Co-led by EPA, NOAA, and DOI, the CCAP project aims to develop guidance and tools for improving adaptation to changing environmental conditions in coral reef management. Adaptation is the practice of making adjustments in human systems and management approaches to account for the effects of changing environmental conditions, to moderate harmful impacts and take advantage of beneficial opportunities. A sea plume is an example of an octocoral or soft coral. Photo credit: NOAAFor coral reefs, adaptation planning requires tailoring and testing recent, general scientific principles of ‘climate-smart design’ specifically for use in coral reef protection, restoration, and management. Design considerations come into play because climate change is not only affecting coral reefs directly (e.g., through temperature-induced coral bleaching), but it is also affecting inputs of other stressors such as land-based pollution (e.g., through alterations in precipitation and drying patterns).

This means that in order to meet management goals, it may be necessary to adjust the timing, location, or structural design of a project or action in order to ensure it is effective in the context of a changing climate. The goal of the CCAP project is to develop the knowledge, tools, and training materials that will help managers achieve successful adaptation planning and implementation.

Activities of the CCAP project have included: