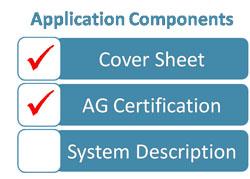 The AG Certification is a letter confirming legal authority to implement the electronic reporting covered by the application and enforce the affected programs using the electronic documents received under those programs.

Many state applicants do not need to submit a legal certification