The District of Columbia and two Maryland counties are taking action to keep trash out of the Anacostia River as they work to meet first-ever trash limits for an interstate river and EPA permit requirements.

The District and Prince George’s and Montgomery counties in Maryland are using multiple means to capture trash or prevent it from entering the Anacostia, from "trash traps" along the river to plastic bag fees, community cleanups and expanded street sweeping.

Trash and debris washed or dumped into waterways pose a health hazard to people, wildlife and fish, and has aesthetic and economic impacts.

In 2010, EPA Region 3, the District of Columbia and the Maryland Department of the Environment announced a Total Maximum Daily Load to crack down on trash in the Anacostia. It was only the second trash TMDL in the nation and the first for a watershed covering multiple jurisdictions. The TMDL is supported in part by enforceable "MS4" stormwater permits that restrict trash entering the river through sewer systems.

The District of Columbia, for example, reported that it cut trash to the Anacostia by 112,582 pounds in 2015 through MS4 actions. Later this year, the District is scheduled to install its ninth trash trap to snag garbage before it reaches the river. The District has also approved a 5-cent fee on plastic bags and a ban on foam food containers, and relies on enhanced street sweeping in identified hot spots, and "Clean Teams" grants to business improvement districts for litter pick-up. Also contributing to D.C.’s overall trash reduction is its Clean Rivers Project to capture and store combined sewer overflows to prevent trash and other pollutants from entering the river system.

Montgomery County has a 5-cent plastic and paper bag tax and a new polystyrene ban to complement other measures to reduce trash, including a stormwater pond, where accumulated trash is scooped up by contractors and volunteers. The county also has a variety of education and outreach efforts, and sponsors trash cleanups and an Adopt a Road program in which volunteers pick up litter at least six times a year along designated stretches of county-owned roads.

Prince George’s County is encouraging business, civic and neighborhood groups to adopt and regularly clean up stream segments – part of its wide-ranging efforts to reduce trash to the Anacostia. The county plans to involve municipalities in its "Clean Sweep" community cleanup initiatives, and is providing anti-litter messages through schools and non-profit partners. The county’s innovative public-private partnership to "green" 2,000 acres of hard surfaces is expected to result in large-scale trash reductions through expanded street sweeping. And a county ban on foam containers is scheduled to take effect in July.

The extensive baseline data collection used to help develop the trash TMDL was a key factor in informing policy decisions by Maryland and D.C. to restrict plastic bags and foam container use to help remove trash at the source before entering the Anacostia and its feeder streams. 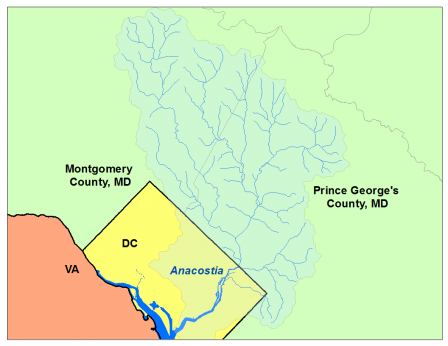 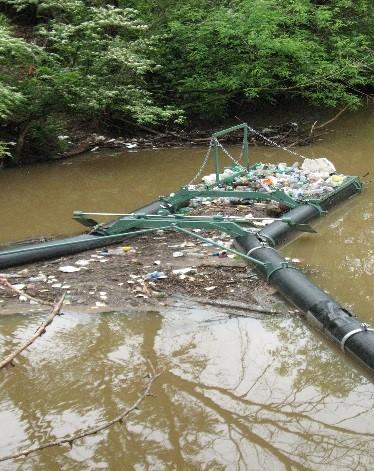 A trash trap in a tributary of the Anacosta River. Photo Credit: Department of Energy & Environment