Ferry Engine Repower to Provide Benefits for Air and Water

The DRBA grant supports repowering the ferry’s propulsion engines with EPA-certified engines that are anticipated to reduce fuel use by 39,600 gallons and reduce nitrogen oxide (NOx) emissions by 39.7 tons each year. While the new engines will assist in cleaning the air, they will also help to reduce atmospheric deposition of nitrogen – air pollution that ultimately settles out of the atmosphere to land or water and impacts water quality in the Chesapeake Bay, the Delaware Bay estuary and other sensitive coastal areas.

The DRBA runs a year-round ferry that transports approximately 800,000 passengers and 300,000 vehicles annually on a 14-mile route between Cape May, New Jersey and Lewes, Delaware. In December 2014, the DRBA received a DERA grant from EPA to supplement the repowering of two Tier 0 marine propulsion engines in the ferry boat M/V Delaware with cleaner-running EPA Tier 3-certified engines.

After repower, the annual fuel use is expected to decrease, on average, by nearly 12% due to the higher efficiency of the new electronically-controlled engines. It is anticipated that over the next 10 years this project will cut overall air emissions from the M/V Delaware by almost 40%, including nearly 400 tons of NOx. The project will have a secondary impact as well, reducing atmospheric deposition.

Air sources account for about one third of the total nitrogen loads delivered to the lands and tidal waters of the Bay watershed. Actions by EPA and its state partners to implement the Clean Air Act have led to a steady decline in that airborne pollution and have been a key factor in the overall progress to date in meeting water quality goals of the Chesapeake Bay Total Maximum Daily Load (TMDL). To learn more about how reductions in air pollution impact the Bay watershed, including a fact sheet and story map Exit, visit http://www.epa.gov/chesapeake-bay-tmdl/air-pollution-chesapeake-bay-watershed. 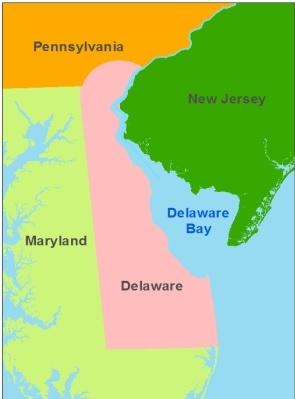