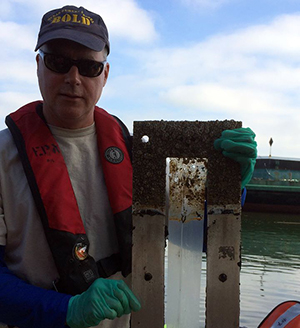 Our Seattle divers assisted a team from EPA, U.S. Army Corps of Engineers, and Massachusetts Institute of Technology to investigate whether polyethylene passive sampling devices could be used to determine the bioavailability of PCBs in the Lower Duwamish River.

State and local health departments have warned against eating crab, shellfish, or bottom-feeding fish in the waterway due to a century of heavy industrial use which has left the waterway contaminated with toxic chemicals. The area is now part of the Lower Duwamish Waterway Superfund site.

The project was designed to demonstrate whether polyethylene passive sampling devices could provide important data about freely-dissolved PCBs (FD-PCBs) in sediment pore water and near-bottom river water in the Lower Duwamish River.

"Pore water" is the water between particles in the top layer of sediment at the bottom of the river - it's where food for the fish live. Because of this, FD-PCB concentrations in pore water are directly correlated to PCB concentrations in animal tissue. This data is critical in helping us develop accurate ecological and human health risk assessments, and evaluating progress in cleaning up the waterway. 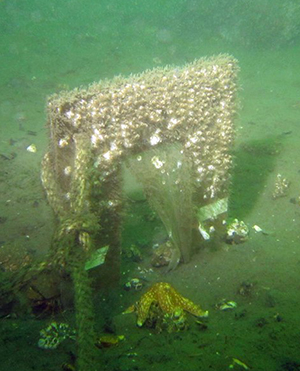 A passive sampling device installed underwater. Because polyethylene has been shown to absorb organic chemicals like PCBs, the passive samplers that we used can provide a direct measure of FD-PCBs at concentrations which are difficult to measure by analyzing pore water directly.

Between November 2012 and June 2015, divers placed and retrieved the passive samplers at the end of a submerged tagline attached to a fixed point (e.g. a piling) and invisible from the surface to prevent tampering.

Core samples were also taken of near surface sediments for further lab analysis.

Using gas supply hoses, surface-supplied air was provided to allow for extended dive times and to compensate for the extremely low visibility that makes it difficult for a diver to keep track of a buddy, and their own air supply.

Drysuits, drygloves, and full face masks were worn to remain isolated from the contaminated diving environment. Decontamination took place as divers returned to the vessel.

The data collected was used to refine our ecological and human health risk assessments, and ultimately inform EPA's cleanup remedy for the site. It also provided an important baseline for evaluating alternative cleanup technologies, such as adding carbon-based sediment amendments to further bind PCBs in place.

In the future, passive sampling techniques can be used to evaluate how effective the cleanup has been in reducing available PCBs, and is a valuable predictor of what can be expected in fish tissue concentration trends.

Divers prepare to install this passive sampling device on the river bottom. 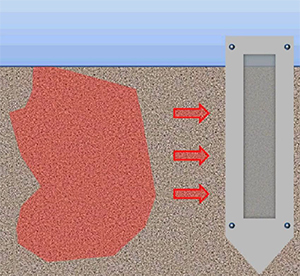 This diagram shows how pollution in sediment pore water gets absorbed by a passive sampler that can be removed and tested in a lab.

A diver in full protective gear heads under the surface with an empty sediment core sample container in hand. 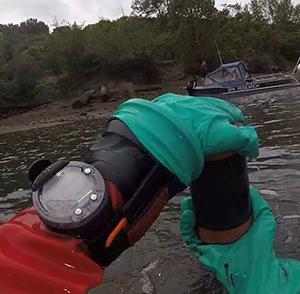 Diver Chad Schulze holds up his prize - a sediment core sample from the river bottom. 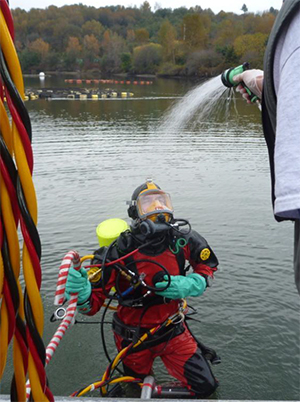 Decontamination (or "decon") following the dive in contaminated water.