stressorsAny physical, chemical, or biological entity that can induce an adverse response (synonymous with agent). and possible effects. During this process, the following questions related to ecological effects might be considered.

A plan for analyzing and characterizing ecological risks is determined based on the integration of available information on sources, stressors, effects, and ecosystem and receptor characteristics.

Questions Addressed by the Stressor-Response Profile

For narrowly defined assessments of a single stressor and effect, the calculated relationship may be expressed as a stressor-response curve

stressor-response curveA graphic, quantitative representation of the relationship between a stressor and an ecological effect. or summarized as a single reference value (a point on the curve [e.g., LD50]). In many cases, however, more complex interrelationships are present. Effect levels can be expressed in terms of lethality (e.g., LC50 or LD50) or effects other than lethality like growth and reproduction (e.g., EC50 or ED50). In conducting a toxicity test, an assessor might choose to establish no-effect stressor level (e.g., NOAEL) or lowest-effect stressor level (e.g., LOAEL) based on comparisons between experimental treatments and controls.

EC50 or ED50 (Effective Concentration or Effective Dose)—A statistically or graphically estimated concentration or dose that is expected to cause one or more specified effects in 50% of a group of organisms under specified conditions.

LC50 or LD50 (Lethal Concentration or Lethal Dose)—A statistically or graphically estimated concentration or dose that is expected to be lethal to 50% of a group of organisms under specified conditions.

NOAEL—No-observed-adverse-effect level. The highest level of a stressor evaluated in a test that does not cause statistically significant differences from the controls.

LOAEL—Lowest-observed-adverse-effect level. The lowest level of a stressor evaluated in a test that causes statistically significant differences from the controls.

thresholdsA concentration above which some effect (or response) will be produced and below which it will not. for significant effects or to evaluate incremental risks (U.S. EPA, 1998). The lower bound of a threshold would be based on consistent conservative assumptions and NOAEL toxicity values. The upper bound would be based on observed impacts or predictions that ecological impacts could occur. This upper bound would be developed using consistent assumptions, site-specific data, LOAEL toxicity values, or an impact evaluation (U.S. EPA, 1997; 1996). 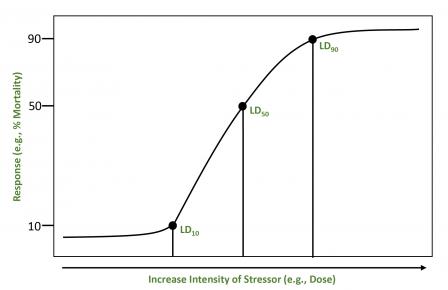 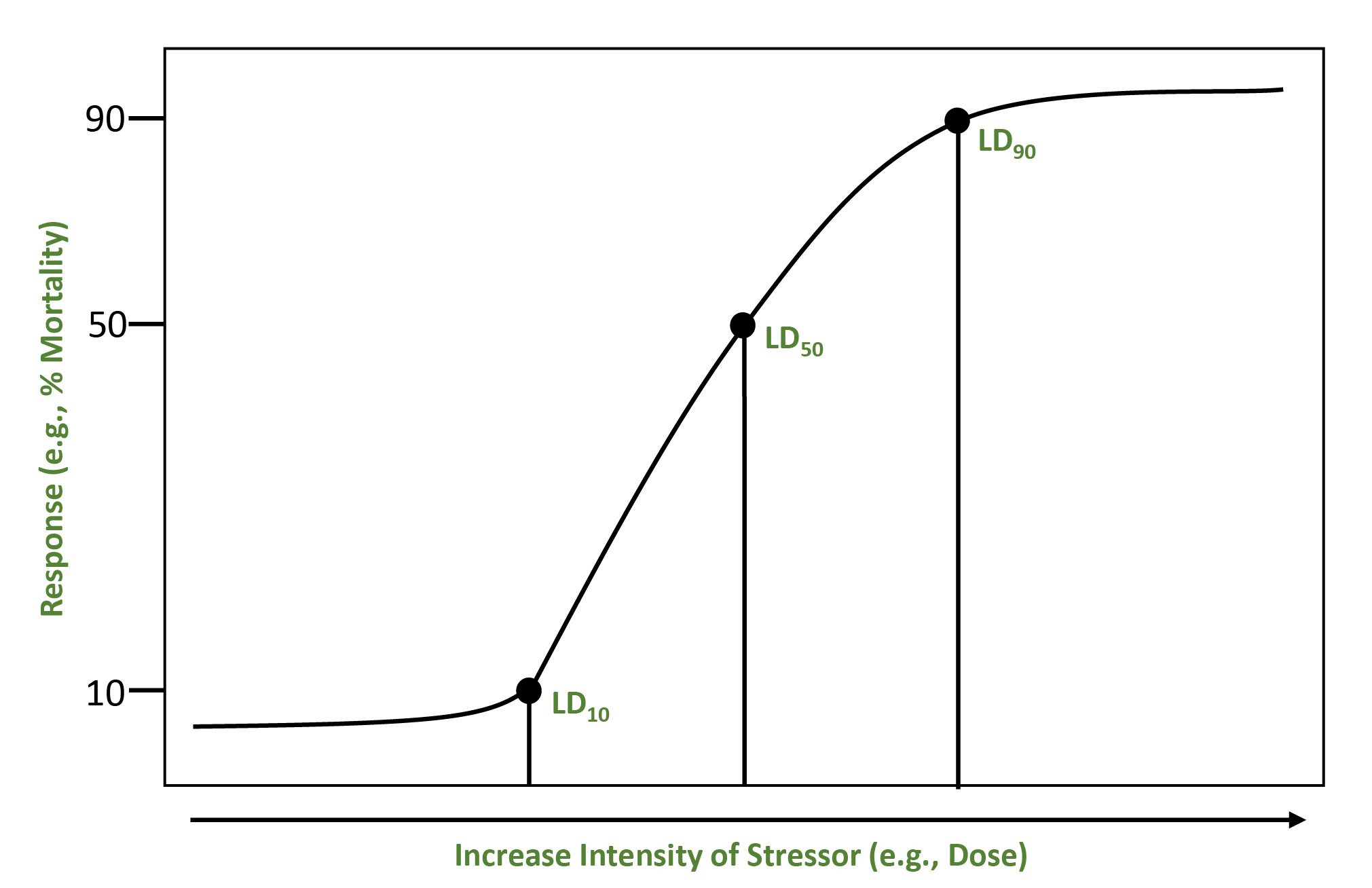 EPA estimates the toxicity or hazard of a stressor by evaluating ecological effects tests that vary from short-term (acute) to long-term (chronic) laboratory studies and might also include field studies. In these tests, animals and plants are exposed to different amounts of a stressor, and their responses to these varying concentrations are measured. The results of these tests may be used to establish a dose-response or cause-and-effect relationship between the amount of stressor to which the organism is exposed and the effects on the organism.

Some of the impacts or ecological effects that are measured in ecotoxicity tests include:

The table below provides examples of toxicity endpoints that might be used in a screening assessment to calculate risk for aquatic and terrestrial receptors.

Literature reviews, laboratory toxicity tests, and field studies are measure-of-effect tools to help link contaminant concentrations to effects on ecological receptors (see table). These tools provide “dose-response” information: that is, how much toxicant is associated with how much of an adverse effect (U.S. EPA, 1991). Adverse ecological effects are changes that are considered undesirable because they alter valued structural or functional characteristics of ecosystems or their components. An evaluation of adversity may consider the type, intensity, and scale of the effect as well as the potential for recovery (U.S. EPA, 1998).

The risk characterization quantifies the links between exposure to stressors

stressorsAny physical, chemical, or biological entity that can induce an adverse response (synonymous with agent). and effects to ecological receptors and characterizes the types, extent, and severity of those risks. Completing risk characterization allows risk assessors to reach conclusions regarding the occurrence of exposure and the adversity of existing or anticipated effects (U.S. EPA, 1998).

stressor-response profilesThe product of characterization of ecological effects in the analysis phase of ecological risk assessment. The stressor-response profile summarizes the data on the effects of a stressor and the relationship of the data to the assessment endpoint. are integrated through the risk estimation process. The final product is a risk description in which the results of the integration are presented, including an interpretation of ecological adversity and descriptions of uncertainty and lines of evidence. The acceptability of adverse effects is determined by risk managers. In characterizing adversity, primary (direct) and secondary (indirect) effects are considered, and sometimes the impact of the secondary effects can outweigh that of the primary effect (U.S. EPA, 1998).

Critical load is a quantitative estimate of an exposure to one or more pollutants below which significant harmful effects on specified sensitive elements of the environment do not occur according to present knowledge. Critical load is scientifically determined based on expected ecosystem response to a given deposition level (e.g., from nitrogen emissions, sulfur emissions, heavy metals, acidity). (See USFS: Critical Loads – Background Information.)

Resources that provide information related to effects in ecological risk assessments are provided below.