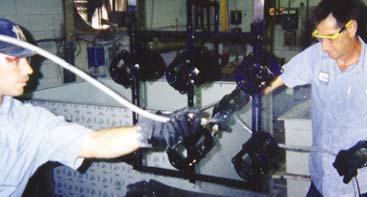 EPA promulgated the Electroplating regulation (40 CFR Part 413) in 1974 and amended it in 1977, 1979, 1981 and 1983. The regulation applies to certain facilities that discharge their wastes to POTWs. The requirements are incorporated into permits or other control mechanisms for indirect dischargers (see Pretreatment Program).
On this page:

The regulation applies to processes that apply metallic coatings on surfaces by electrodeposition, and that were in operation before July 15, 1983, at facilities that discharge their wastes to POTWs. This includes both independent (job) platers and captive operations associated with product fabrication and assembly.

Metals coverage under Effluent Guidelines
- Click to enlargeNote: Processes that began operating on or after that date, at indirect dischargers

direct dischargerA point source that discharges pollutants to waters of the United States, such as streams, lakes, or oceans. electroplaters are also covered by the Metal Finishing category.

The plants covered by the Electroplating regulations are found throughout the United States but are concentrated in heavily industrialized areas. The pretreatment standards apply to facilities in seven subcategories:

The standards have specific numerical limitations for each subcategory, and are imposed on pollutants which may interfere with, pass through, or otherwise be incompatible with POTWs. For plants with a daily flow of 38,000 liters (10,000 gallons) per day or more, the pretreatment standards specifically limit indirect discharges of cyanide and the following metals: lead, cadmium, copper, nickel, chromium, zinc, and silver. Additionally, these regulations limit "total metal discharge," which is defined as the sum of the individual concentrations of copper, nickel, chromium and zinc. For plants with a daily process wastewater flow of less than 38,000 liters (10,000 gallons), these standards limit only lead, cadmium, and cyanide.

Established BPT, BAT, NSPS and PSNS requirements for Subpart A