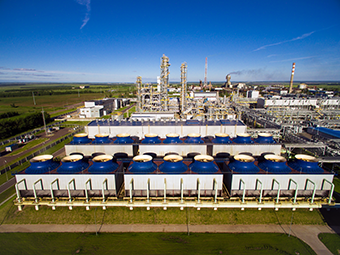 EPA initially promulgated the Fertilizer Manufacturing Effluent Guidelines and Standards (40 CFR Part 418) in 1974 and 1975, and amended the regulation between 1975 and 1987. The regulation covers direct

direct dischargerA point source that discharges pollutants to waters of the United States, such as streams, lakes, or oceans. and indirect

What is the Fertilizer Manufacturing Industry?

The fertilizer industry is composed of multi-product manufacturing plants. Phosphate-based products and ammonia-based products are typically produced at different plants.

Ammonia is manufactured using atmospheric nitrogen and hydrogen derived from natural gas or petroleum refinery byproducts. Ammonia is sold as a straight ferilizer, and is used to manufacture urea, ammonium nitrate and nitric acid products.

Wastestreams include:
Fertilizer manufacturing is included within the following NAICS groups:

The NAICS listing is provided as a guide and does not define the coverage of the Fertilizer Manufacturing category. For precise definitions of coverage, see the applicability sections in 40 CFR Part 418.

In addition to the BCT amendments, portions of Part 418 were revised between 1975 and 1987 pursuant to litigation. For the current regulatory requirements see 40 CFR Part 418.