The EPA and the Department of Homeland Security partnered in conducting the Wide Area Urban Radiological Containment, Mitigation, and Clean up Technology Demonstration. The demonstration was held in Columbus, Ohio, on June 22-25, 2016. It addressed technologies that could abate a wide area incident, such as a dirty bomb explosion or a nuclear accident. This highly successful demonstration provided emergency responders with options for response to a wide area radiological incident, such as a dirty bomb explosion or a nuclear accident, by showing responders the operation feasibility of several technologies in real time. During the demonstration end users, those who would respond to real world emergencies, deployed the technologies. The participation of the end users in the demonstration provided valuable training for these responders in addition to demonstrating the effectiveness of the technologies. While no live radiological agents were employed in this demonstration, critical operational insight was gained by the response community. This event furthers the applied 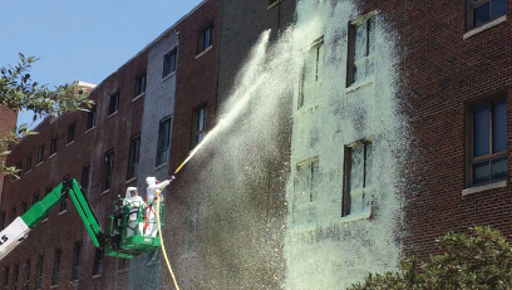 Washing of brick building during radiological decontamination demonstrationradiological cleanup research conducted by EPA at bench and pilot scales over the last several years by testing that research at a large scale. In attendance were senior officials from the Department of Homeland Security; Ohio EPA; Columbus, OH City Council; Battelle Memorial Institute; first responders from the U.S. and Canada; EPA responders; technology vendors; representatives from FEMA; New York City; the Navajo Nation; the United Kingdom, and many others. Michael Tobin, emergency management planner from Charlotte, North Carolina had this to say about the demonstration, “It’s a great advantage to us to have the federal authorities look at these products, be able to test them, with input obviously from the local response organizations that are going to respond, to see what is the best product on the market.”

Watch the Toolbox of Technology  Exitvideo to learn more.