The Underground Transport Restoration (UTR) Project was a collaboration between the Department of Homeland Security and EPA to develop capabilities for the rapid return to service of underground transportation systems following the release of a persistent biological agent, such as Bacillus anthracis (Ba) spores, the causative agent for anthrax. As part of the UTR Project, EPA researchers developed a better understanding of methodologies for remediation of the underground subway infrastructure and assets, like rail cars. The full-scale demonstration highlighted current remediation methods, including EPA lab-tested and developed methods, in a mock subway system. The UTR Operational Technology Demonstration (OTD), conducted at the US Army's Fort A.P. Hill’s Asymmetric Warfare Training Center, evaluated decontamination technologies that could be used in the event of an anthrax incident in a subway system. The project used a non-pathogenic surrogate that behaves much like anthrax spores in terms of how they are transported in the air, settle and how they can be inactivated. 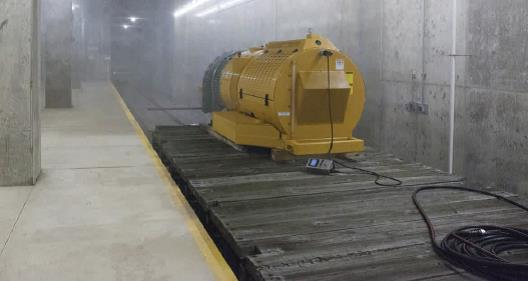 The OTD project consisted of two rounds of sequences of background sampling, agent release, decontamination, sampling, waste removal and decontamination, and post-decontamination sampling. The technologies that were evaluated included a fogger that produced a fog from diluted bleach and skid mounted sprayer that sprayed a liquid pH adjusted bleach solution. Both technologies were selected because they are off-the-shelf and could easily be purchased in an emergency.

The UTR OTD demonstrated several workable technologies that could be utilized to remediate a subway system after contamination with Ba spores, and provided information on the cost and magnitude of such a response. Overall, the project provided the opportunity to assess the nation’s current response and remediation capabilities and areas of need for future capability enhancement. The demonstration was helpful in defining the many challenges that could be faced during a real incident including sealing portions of a subway tunnel, sampling unique surfaces such as railway ballast, and managing wastes that cannot be decontaminated in situ.

Watch the video to Lean more about the research and demonstration here.