The purpose of this project is to prepare the U.S. to respond to and to mitigate a wide-area release of a biological agent affecting USCG facilities and assets by demonstrating capabilities and by developing strategic guidelines. Specifically, in this phase of AnCOR, the field-level decontamination of a USCG vessel contaminated with several Bacillus anthracis surrogates were conducted. 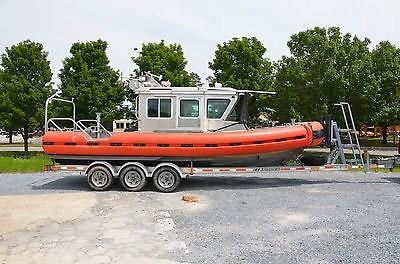 Each round of testing consisted of the same activities:

Samples were collected from outside of the cabin of the vessel, inside the cabin and from BI coupons placed in the bow, the radio console, cabin and fuel compartment.

The vessel was located on land and on a transport trailer as depicted in Figure 1. Original electronics had been removed from the decommissioned vessel, so surrogate electronics were placed in the vessel and replaced with a new set for each round of testing.

For each round of testing, the trailer and vessel was tented (Figure 2) using a 6-mm-thick, high-diffusion-resistant polyethylene vinyl alcohol (EVOH) tarp placed on the ground over which the trailer was parked. Another section of tarp was placed over the top of the vessel and joined with the bottom tarp. This tenting allowed simultaneous fumigation of the interior and exterior of the vessel. The area inside the tented volume also contained several fans, two-three 1,500-watt radiant heaters, and two humidifiers to help maintain temperature and RH equilibrium throughout the tented volume during the duration of the study.

In between rounds of testing the vessel was reset. Resetting consisted of rinsing the vessel with water and replacing any materials that were removed or damaged as part of the previous test round.  Electronics were replaced for each round of testing. Electronics consisted of a laptop, marine GPS and marine radio. The equipment was tested after each round to determine if any damage resulting from decontamination had occurred to the equipment.

Six surface materials were selected to be studied: marine grade aluminum, non-porous seat material, anti-skid plate, bumper material, marine grade carpet, and glass.  Predetermined locations of these surfaces were inoculated by EPA personnel with a known amount of (106 to 107 colony forming units [CFUs]) of Bg and Btk spores using a micropipette (Figure 3). Inoculation locations were sampled pre- and post-decontamination during each round using sponge stick wipes to sample 10” × 10” areas of non-porous materials and micro-vacuums to sample 12” × 12” areas of porous materials. The exact locations were documented and delineated with colored tape or colored marker: orange for locations inoculated wit Bg and green for those inoculated with Btk.

In the   laboratory, Ba Sterne, Btk and Bg was inoculated onto 1 cm round BI coupons constructed out of the selected vessel materials. The inoculated coupons were placed into 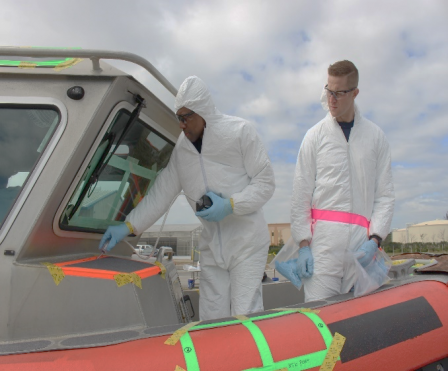 Figure 3. Sampling with a micro-vacuum.Tyvek® envelops, through which gases can permeate, and remained in those envelops throughout transport to the site, placement in the vessel and decontamination (Figure 4).  The BI coupons were placed for each round of testing during pre-decontamination and removed post-decontamination. Colony forming units (CFU) extracted from the coupons were compared to positive controls (coupons inoculated but not exposed to decontamination) as a measure of the effectiveness of decontamination.

Following inoculation and placement of the BI coupons, but prior to the application of the decontaminant, sampling teams conducted pre-decontamination sampling to establish the levels of Bg and Btk on the surfaces throughout the vessel. For smooth, non-porous surfaces, samples were collected with a cellulose sponge-stick wipe, and for porous and/or rough surfaces, 37-millimeter (mm) vacuum cassettes were used.  The same methods were used for pre- and post-decontamination sampling. 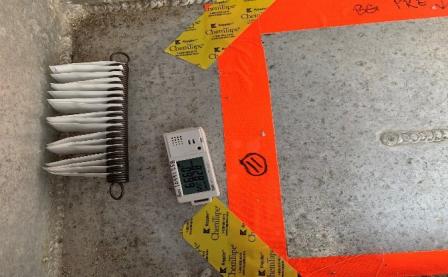 The operating conditions for the methyl bromide decontamination test included maintaining a temperature above 70° F and a relative humidity above 70%.  An methyl bromide concentration of 212 mg/l was used over a hold time of 48 hours resulting in a target contact time of 10,200 mg/l-hrs.  An actual contact time of 11,500mg/l-hrs was achieved.

Two activated carbon scrubber systems (Figure 5) were used in series to remove the methyl bromide from the air contained under the tarps/tents following decontamination.

Three household humidifiers, with a fourth on reserve if needed, were used to disperse HP within the tented vessel. The reserve humidifier was activated at hour 43. Operating conditions included maintaining a temperature above 70° F; relative humidity was not controlled.  The target concentration of peroxide was 20-30 ppm with a hold time of 96 hours. An actual concentration-time of 700 ppm-hrs was achieved.

Figure 6. Dynafog Ultra ll foggers used to disperse peracetic acid.was not controlled. A concentration of 32.3 ml/m3 was maintained for 18 hours resulting in a concentration-time of 520 ppm-hours was achieved. ATI sensors were utilized to monitor concentrations within the tented area and the MultiRAE Pro sensors (10.6 eV) were deploy at the edges of the work zone.

Both the methyl bromide and peracetic acid decontamination approaches successfully inactivated both Bg and Btk as indicated by both sampling of the vessel surfaces and BI coupons. All results were non detectable for viable spores.

Sampling of the vessel following the low concentration hydrogen peroxide decontamination did not detect any viable Bg spores; although, low levels of Btk CFUs were detected on some surfaces, the highest being 143 CFUs detected on a seat material sample. Although the low concentration hydrogen peroxide achieved 6-log reduction of viable BtK, considered a standard for bacterial inactivation, there is no known de minimis level below which B. anthracis is not infectious. Thus, detection of any viable spores of a B. anthracis surrogate is of concern.

Twelve out of ninety BI coupons indicated viable spores.  Most positive results came from coupons located in the radio console, with Ba Sterne, Bg and Btk all being detected on some coupon materials at level up to 6 log CFU.

None of the decontamination approaches appeared to have a negative impact on the vessel electronics.

A report on this task including a cost analysis and comparison between decontamination approaches is expected to be available October 2020.  Given the success of the methyl bromide and peracetic acid decontamination rounds, these approaches will be considered for the wide area demonstration scheduled for 2021.

*Preliminary results mean that this information has not yet undergone Quality Assurance or external peer review.

The U.S. Environmental Protection Agency (EPA) directed and managed this work. This study was partially funded through the Analysis for Coastal Operational Resiliency (AnCOR) Project by the U.S. Department of Homeland Security Science and Technology Directorate under interagency agreement (IA HSHQPM-17-X-00245). Mention of trade names or commercial products does not constitute endorsement or recommendation for use of a specific product. The contents are sole the responsibility of the authors and do not necessarily represent the official views of S&T, DHS, or the United States Government.