WASHINGTON - The Department of Justice and U.S. Environmental Protection Agency (EPA) announced today a landmark settlement requiring Casper's Electronics, of Mundelein, Ill., to pay a penalty and stop selling devices that allow cars to release excess levels of pollution into the environment, in violation of the Clean Air Act (CAA).

Casper's Electronics Inc., located in Mundelein Ill., is an "aftermarket" manufacturer and distributor of electronic parts and equipment for automobiles that markets its products nationwide over the internet. Among the products manufactured and sold by Casper's were "oxygen sensor simulators" or "O2 Sims." An "O2 Sim" is small device which is designed to be installed as part of a car's emission control system. O2 Sims are illegal "defeat devices" under the Clean Air Act because they "defeat" the operation of a car's emission control equipment. 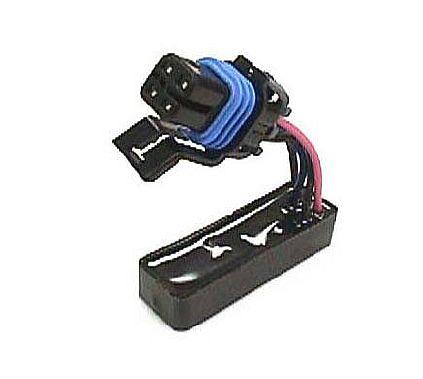 Example of an Oxygen Simulator or "O2 Sim" sold by Casper's Electronics, Inc.

An O2 Sim works by sending a false computer signal to the computer on a car or truck. The false signal prevents the "malfunction indicator light" (or "check engine" light) from illuminating when the catalytic converter malfunctions, is damaged or is missing. The malfunction light is part of a car's "onboard diagnostic system," and alerts the driver when there is a problem with the emission control system that needs to be repaired. A missing or damaged catalytic converter will result in much higher levels of pollutants in car exhaust.

Casper's sold over 44,000 O2 Sims before further sales of these illegal "defeat devices" were halted as a result of EPA's investigation and follow-up enforcement action. These devices were advertised for "off road use only" or "non-road use only." However, the O2 Sims were designed and marketed to be used in regular production vehicles ("on road" or "on highway" vehicles), which is illegal under the Clean Air Act. In addition, while there are different control standards for "off road" vehicles (e.g., construction equipment) because of differences in the types of engines and applications, there is no general "off road" use exemption from the pollution control requirements of the Clean Air Act.

The estimated emissions impact from the O2 Sims sold by Casper's over the life of the vehicles in which they were installed is:

The prohibition on future sales of O2 Sims will prevent additional excess emissions of HC, CO and NOx.

HC and NOx are both contributors to the production of ground-level ozone, or smog, which can trigger serious respiratory problems. NOx also contributes to the formation of acid rain and to global warming, among other impacts. CO impairs the ability to breathe and is especially harmful to children, people with asthma and the elderly. More information on the health effects of air pollutants.

Casper's is required to pay a civil penalty and interest totaling $80,000. The penalty was substantially reduced from what Casper's would have been liable for, based on Casper's demonstrated inability to pay a larger penalty.