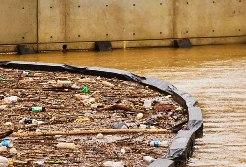 Boom captures litter and other debris carried by stormwater.

The EPA returned work in this area to the core enforcement and compliance assurance program at the end of FY 2019. Under this initiative, EPA has taken actions at 97 percent of large combined sewer systems, 92 percent of large sanitary sewer systems and 79 percent of Phase 1 municipal separate stormwater systems. Accordingly, the Agency believes that this NCI no longer presents a significant opportunity to correct water quality impairment nationwide.

Since this NCI began in 2000, the EPA, in conjunction with state co-plaintiffs, has taken enforcement actions at the largest municipal sewer systems with CWA violations to reduce pollution and to reduce unlawful discharges of raw sewage that degrade water quality in communities.

EPA and states will continue to monitor implementation of these long-term agreements, and to adapt them to changing circumstances and new information, such as the increasing commitment of cities to implement green infrastructure, changes in financial capability, or technological advances.

The following maps and charts show EPA actions to reduce stormwater runoff and unlawful discharges of raw sewage. Although not graphically displayed as it is here for CSSs and SSSs, since FY 2010 EPA has also addressed 192 (75%) of the 253 largest (Phase 1) MS4s.

Map of the status of combined sewer overflow systems (CSO) serving a population of 50,000 or more people

List of consent decrees of combined sewer overflow systems (CSO) with links to the consent decree and data on the status of the decree.