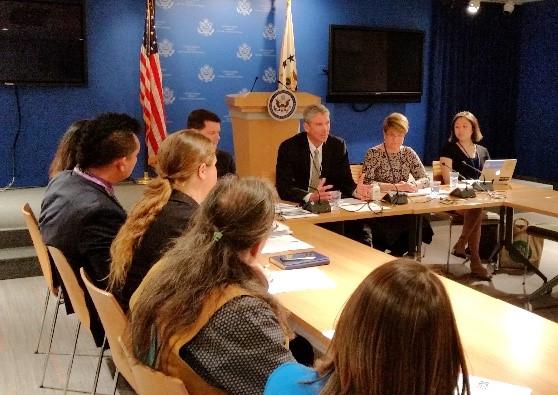 Federal officials (EPA, ACHP and FS) speaking at the U.S. Government side event on Traditional Knowledge, held during the 18th Session of the Permanent Forum on Indigenous Issues, April 24, 2019

“…at EPA, we remain committed to ensuring that environmental justice is integrated into EPA’s programs and activities to strengthen environmental and public health protections for low-income, minority, indigenous, and disadvantaged communities that are more likely to live near contaminated lands or be disproportionately impacted by environmental hazards,” — EPA Administrator Andrew Wheeler

For many years, EPA’s tribal program and environmental justice programs focused on helping federally recognized tribes develop their own environmental programs.  However, EPA was also asked to work with other indigenous peoples, including tribal members and grassroots organizations. 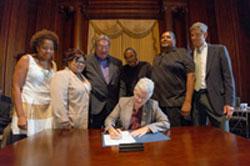 Former Administrator Gina McCarthy signing the memo to issue the policy during a meeting of the EPA National Tribal Operations Committee, held at EPA Headquarters.
"EPA must work each and every day -- hand-in-hand with other federal agencies, states, tribes and local communities -- to improve the health of American families and protect the environment one community at a time, all across the country." — Former EPA Administrator Gina McCarthy

The Policy describes how EPA works with federally recognized tribes and indigenous peoples throughout the United States, and with others living in Indian country. The seventeen principles of the Policy help EPA protect the environment and public health and address environmental justice concerns in Indian country. The Policy also includes implementation tools available to the Agency.

EPA is working to incorporate the seventeen environmental justice principles in the following four areas:

EPA began the development of the Policy in 2011, tasking the EPA Tribal and Indigenous Peoples Environmental Justice Work Group, comprised of EPA staff, with creating a draft policy.

In addition, the Agency sought advice and recommendations from the National Environmental Justice Advisory Council (NEJAC), a federal advisory committee to the EPA.  The NEJAC's Indigenous People Work Group (IPWG), made up of tribal and indigenous environmental justice stakeholder representatives, assisted the NEJAC in providing advice and recommendations to EPA on how the Agency can work effectively with federally recognized tribes and indigenous peoples to address their environmental justice concerns.

The NEJAC provided the following advice and recommendations to help EPA develop an effective Policy:

Consultation with tribes, as well as outreach to indigenous stakeholders, was a critical part of the development of the policy.

Since the inception of the Policy in 2014, EPA has been working to implement its seventeen principles. Below are some examples of how the Policy is being implemented.

Principle 6 of the Policy – "encourages, as appropriate and to the extent practicable and permitted by law, the integration of Traditional Ecological Knowledge into the Agency's environmental science, and policy decision-making processes to address environmental justice concerns and facilitate program implementation."

A U.S. Government (USG) side event, Traditional Knowledge – U.S. Government Consideration, was held in April 2019, as part of the Eighteenth Session of the Permanent Forum on Indigenous IssuesExit. The meeting was hosted by the U.S. Department of State at the USG United Nations Mission. Approximately 25 tribal leaders and indigenous organization representatives attended. The side eventExitincluded panelists from the Advisory Council on Historic Preservation (ACHP), EPA’s Office of Environmental Justice, and the USDA/Forest Service. The ACHP focused on their authorizing federal laws, regulations, and recent policy developments in TK. EPA highlighted current policies related to TK, such as the EPA Policy on Environmental Justice for Working with Federally Recognized Tribes and Indigenous Peoples (2014) – Principles 6 and 7, and the OLEM Memorandum – Considering Traditional Ecological Knowledge during the Cleanup Process (2017), and EPA Region 10’s TK principles (2018). Tribal and indigenous US-based organizations, including the Sevenths Generation Fund, Native American Rights Fund, Indigenous Environmental Network, International Indian Treaty Organization, were represented. Participants also included international indigenous organizations, such as the UN Expert Mechanism on the Rights of Indigenous Peoples, and a few tribal government leaders and representatives, including from the Chickaloon Village of Alaska and Navajo Nation. Several recommendations, questions and comments were raised by the tribal and indigenous participants for government consideration and to enhance understanding of TK.

In 2017, EPA’s Office of Land and Emergency Management issued a memorandum to provide direction to improve the decision-making process as it relates to site assessment, characterization, and cleanup activities (PDF) (6 pp, 225K), to ensure OLEM is considering TEK when tribes willingly provide this information to the EPA. The consideration of TEK offers a way of bridging gaps in perspective and understanding, especially when used in conjunction with knowledge derived from the scientific method. OLEM’s cleanup programs (including national and regional programs) address contaminated soil, groundwater, surface water, sediments, air, and other environmental media. These programs include common elements such as an initial site assessment, initial site stabilization when needed to protect against imminent threats, site characterization, cleanup option evaluation, selection, and implementation, and long-term stewardship of the site. Depending on the program and processes employed, OLEM can consider TEK during various phases of program implementation.

At the Grasse River Superfund Site in New York, EPA worked collaboratively with the Saint Regis Mohawk Tribe on the design of the cleanup of contaminated sediment along the shores of the Grasse River, specifically with thoughtful attention to habitat reconstruction and application of Traditional Ecological Knowledge (TEK) to the restoration of habitats following cleanup. Incorporating TEK involved close collaboration between EPA and the Tribe’s Environment Division on inclusion of tobacco burning ceremonies and seed ceremony songs in the reconstruction process as specified by the Tribe. Seed selection and seed sources/nurseries are also being selected on the basis of their ability to provide the species of cultural plants used for traditional foods, medicines, utility, ceremony, etc. specified by the tribe as well as seeds adapted to the site-specific growing conditions.