Nanoscale materials (or "nanomaterials") exhibit unique properties that can be defined by their small size, ≤100 nanometers in at least one dimension. While nanoscale materials often have the same molecular composition as larger, non-nanoscale materials, they represent a unique class of substances independent of their larger counterparts because the small size results in unique physical-chemical characteristics.

These distinctive characteristics allow for novel applications of intentionally engineered or manufactured nanomaterials, and can result in a unique set of fate, transport, exposure, and human or ecological health impact scenarios. 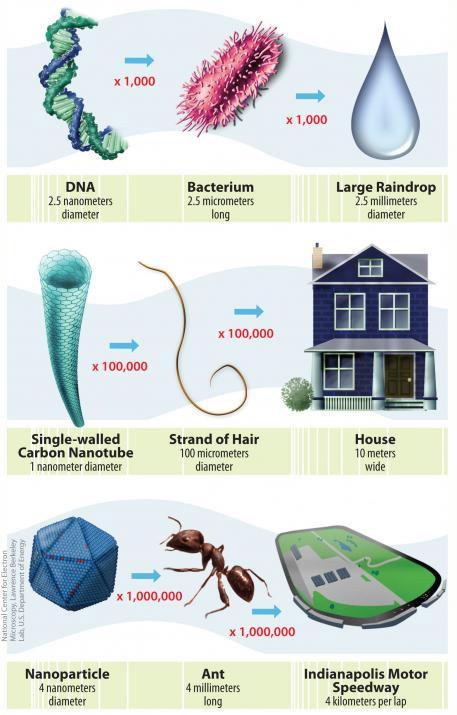 Nanoscale materials can be grouped by their source: they can be naturally occurring, unintentionally produced, or specifically engineered.

While there are no set categories or classification methods currently used to group engineered nanomaterials, there are distinct groups that exist based on the chemical composition and physical arrangement of the material - such as carbon-based nanotubes and nanofibers, metal or metal-oxide nanoparticles, and selenide-based quantum dots.

The International Organization for Standardization (ISO) has published a standard (ISO/TS 27687:2008) that lists terms and definitions related to particles in the field of nanotechnologies. Major groups of engineered nanomaterials are described in more detail below.

A defining characteristic of nanomaterials is their size; nanomaterials are typically defined as particles or other substances that are less than 100 nanometers in at least one dimension.

The small size of nanomaterials influences the way that these substances behave in the environment because of quantum effects and surface-to-volume ratios. Two important aspects of the behavior and characteristics of small particles that affect exposures are described here.

In addition to the physics of small size particles and high surface-to-volume ratio of nanomaterials, it is also important to consider the following when characterizing exposure:

Exposure to nanomaterials can occur through inhalation, ingestion, or dermal absorption. Further, biomedical uses can result in exposure via injections. The most likely routes differ greatly depending on the individual nanomaterial’s physical-chemical properties (and how these properties impact fate between environmental media) as well as the application in which the material is used.

The National Nanotechnology Initiative Workshop on Human and Environmental Exposure Assessment (2009) came to several broad conclusions on exposure routes, including:

Researchers must consider how the physical-chemical properties of a specific nanomaterial impact fate between environment media, and how the application of a nanomaterial results in different exposure scenarios. Different nanomaterial applications can result in distinct primary exposure routes.

Due to the wide range of nanomaterial compositions and applications, it is theoretically possible for nanomaterials to be found in any environmental media, including indoor and outdoor air, surface water and drinking water, soil, sediment, and indoor dust.

Additionally, the NNI Workshop Reports outlined many challenges that currently exist for detecting, characterizing, and quantifying nanomaterials in environmental media, including:

Currently, many engineered nanomaterials and nanomaterial applications are still in the research and development stage. Therefore, workers involved with these fields represent a key population that may be at high risk for exposure.

The use of nanoscale materials in consumer products is increasing rapidly. According to the Project on Emerging Nanotechnologies (PEN) nanomaterials are found in electronics, cosmetics, automotive, and medical products. PEN maintains a searchable inventory of “nano” products that includes manufacturer-identified consumer products currently on the market.

While nanomaterials in electronics have limited exposure potential for consumers (as the nanomaterial is usually embedded in the product interior), individuals who work in electronic manufacturing or electronic recycling may be occupationally exposed to nanomaterials. Other nano-enabled products may result in higher exposures to the consumer, such as cosmetics containing nanomaterials.

Nanomaterials are also currently used many biomedical devices, such as imaging technologies or drug treatments. Biomedical engineers and pharmaceutical scientists may experience occupational exposure during the development and manufacturing of these applications, while medical professionals and patients may incur exposure through their use.