The fate of the emitted pollutants is largely determined by the source release characteristics. After pollutants are released to the atmosphere, their transport, dispersion, and transformation are governed by meteorological principles, terrain characteristics, wet and dry deposition rates, and certain chemical properties of the air pollutant (such as aqueous solubility, vapor pressure, air-water partition coefficient (i.e., Henry's Law constant), molecular diffusivity, phase partition coefficient, melting point, and adsorptivity). For a limited subset of air pollutants, it is important to consider deposition from air to soil, vegetation, or waterbodies. For others, such deposition is not important.

Many studies indicate that a limited number of pollutants emitted into the atmosphere (e.g., mercury) are passed to humans or wildlife through non-inhalation pathways (EPA 1990). An example would be an air pollutant depositing from the air onto the soil, followed by ingestion of the soil by a child or by biota in an ecosystem. The figure below is an example of the conceptual model diagram for an ecological risk scenario involving multipathway exposure to air pollutants. For a limited subset of air pollutants, greater human and ecological exposures to the pollutant occur through non-inhalation exposures than through inhalation exposures. These air pollutants typically are persistent in the environment, have a strong tendency to bioaccumulate, and exhibit moderate to high toxicity. 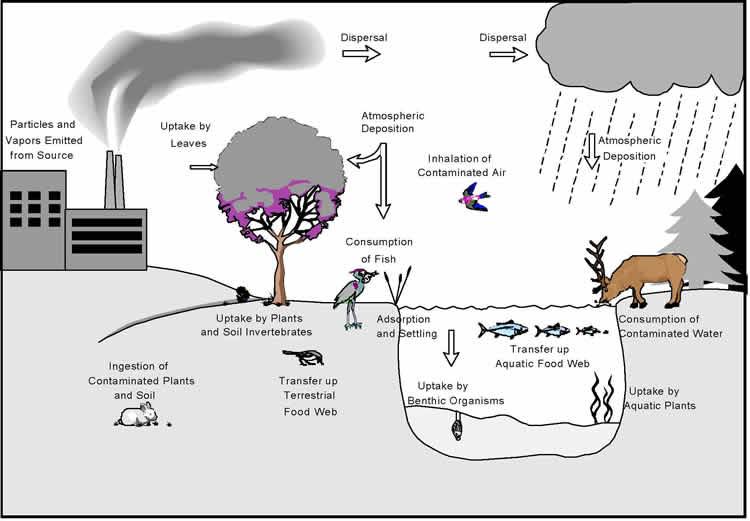 A variety of mathematical methods or models, each with specific data needs, is available or is under development to describe the multimedia transport and fate of pollutants released to the atmosphere. These include the fate, transport and ecological exposure module (TRIM.FaTE) of the Agency's Total Risk Integrated Methodology (TRIM), as well as other Agency multimedia methods and models.