On December 17, 2020, the U.S. Environmental Protection Agency (EPA) announced that the State of Florida is the first state in more than 25 years to apply for and receive approval to implement a Clean Water Act (CWA) Section 404 program, joining Michigan and New Jersey as the only states in the country with such authority. The action formally transfers permitting authority under CWA Section 404 from the U.S. Army Corps of Engineers (Corps) to the State of Florida for a broad range of water resources within the State. This action allows the State to more effectively and efficiently evaluate and issue permits under the CWA to support the health of Florida’s waters, residents, and economy. Florida’s Section 404 program became effective on December 22, 2020, upon publication of EPA’s approval in the Federal Register.

On August 5, 2020, EPA Region 4 Administrator Walker and FDEP Secretary Valenstein, signed a Memorandum of Agreement (MOA) as part of the assumption process. On August 20, 2020, EPA received from Governor Ron DeSantis a request for the Agency to conduct a review and approve Florida’s program to assume administration of the CWA 404 program. Florida’s submission met the standards established under Section 404 of the CWA and implementing regulations and will ensure the protection of Florida’s aquatic resources equal to or better than the existing federal permitting program.

Florida began pursuing 404 Assumption in 2017. EPA maintained regular communication with the State since that time to provide information and respond to questions regarding the federal requirements for 404 Assumption.

On August 20, 2020, EPA received a complete package from the Florida Department of Environmental Protection (FDEP) with a request to assume administration of a Section 404 program, triggering a 120-day review period set forth by the CWA. The package included a request from Governor Ron DeSantis requesting program approval, a statement from the General Counsel for FDEP, a Memorandum of Agreement (MOA) between EPA and FDEP, a MOA between the Secretary of the Army and FDEP, a complete program description, and copies of all applicable Florida statutes and regulations.

As part of the review process, EPA solicited public review and comment during a 47-day period that included two public hearings. More than 3000 comments were received verbally or in writing.

Part of the review process included the development of a comprehensive Biological Evaluation of more than 200 species throughout Florida that are federally listed as endangered or threatened or Endangered Species Act (ESA) species of concern. EPA also consulted with the U.S. Fish and Wildlife Service (FWS) under Section 7, resulting in the issuance of a Biological Opinion and Incidental Take Statement related to the approval and implementation of Florida’s program. In addition, as part of its review EPA determined its approval is consistent with the requirements of the Magnuson-Stevens Fishery Conservation and Management Act and the Coastal Zone Management Act.

Florida’s Section 404 program became effective on December 22, 2020, upon publication of EPA’s approval in the Federal Register .

EPA’s oversight of Florida’s program includes, among other things, the review of draft permits for certain categories of permits as set forth by the EPA-FDEP MOA. EPA’s review of permits will be also be conducted consistent with a Programmatic Agreement established with the consulting parties under the NHPA and the Biological Opinion and Incidental Take Statement issued through consultation under section 7 of the ESA. EPA’s reviews will be conducted in coordination with the Corps, the USFWS, the National Marine Fisheries Service, and any affected Tribes.

Section 404 of the CWA requires a permit before dredged or fill material may be discharged into waters of the United States. Section 404(g) of the CWA gives states and tribes the option of assuming, or taking over, the permitting responsibility and administration of the Section 404 permit program for certain waters. Section 404 permits for those assumed waters would be issued by the state or tribe instead of the Corps. The CWA provides that the Corps retains permitting authority in certain tidal waters and other specified waters that are currently used or may be used in the future to transport interstate or foreign commerce. State and tribal Section 404 programs must be at least as stringent as federal permitting.

State and tribal assumption of CWA Section 404 programs can lead to multiple benefits.  State and tribal regulators are generally more familiar with local aquatic resources, issues, and needs. An efficient state- or tribal-run program can help reduce delays and save money for permit applicants. States and tribes can also integrate dredged and fill permitting with traditional water quality programs, such as monitoring and water quality standards, or state/tribal land use planning requirements. Under an assumed program, Section 404 permit applicants may need only a single state or tribal permit for dredged or fill material discharges. Since more than a dozen states and tribes currently administer dredged and fill programs separate from the federal program, assuming the Section 404 program allows states and tribes to streamline the review process and reduce unnecessary paperwork and duplication. It may also reduce the potential for conflict between federal and state or tribal decisions or permitting conditions. 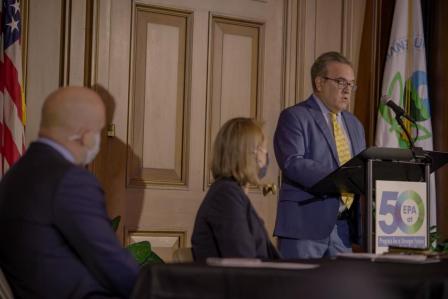 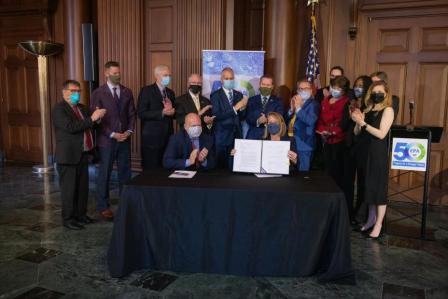