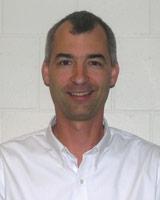 Patent Information from the U.S. Patent and Trademark Office website

Federal Technology Transfer Act (FTTA) staff: Contact us if you are interested in learning more about how to license this technology.

Summary of the Technology

At the same time, the technology avoids nitrification in the distribution system and other problems associated with the presence of ammonia. The process converts ammonia in source water to nitrate by:

Although ammonia in water does not pose a direct health concern, nitrification of significant amounts of excessive ammonia may. 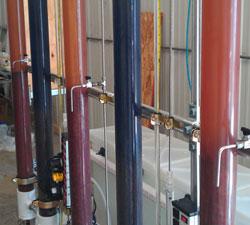 How the Technology is Different

Physicochemical methods for ammonia removal, such as ion exchange, are able to remove ammonia to varying degrees. Biological approaches may be the most efficient and cost effective, however, and do not produce undesirable waste streams. Biological nitrification is a two-step, aerobic, microbiological process:

The complete process takes approximately 4.5 mg of O2/mg of NH4-N in the water. Aeration is a necessary feature of any biological ammonia treatment system. The traditional approach of aeration followed by biologically-active filtration, however, is limited.

The amount of oxygen that can be added to the water is limited by the saturation of oxygen in water. This in turn limits the amount of ammonia that can be treated. In response to this challenge, EPA developed and patented this innovative approach to introduce oxygen to the treatment system to remove ammonia.

EPA's ammonia biological treatment system was successfully piloted for over a year at a small community in Iowa. At the time of the study, the test community did not have a centralized water treatment or a drinking water distribution system. Following extensive flooding to the region in 2008, the community decided to build the necessary infrastructure to provide potable drinking water. Because the ground water at the site had low oxygen (3.6 mg O2/L) and elevated ammonia of 3.3 mg N/L as well as reduced iron of 0.82 mg/L, EPA's treatment system was ideal.

The pilot successfully treated all of the source water ammonia. The community used data from the pilot to define design and operating parameters. EPA wrote a final report about the Palo ammonia water treatment pilot project, and the community built a full-scale treatment plant. EPA conducted other pilot projects in the Midwest and Southeast.