Words that are shown in bold and italics are defined in the Glossary.

Section 176(c) of the Clean Air Act (CAA) prohibits federal agencies from taking actions in nonattainment and maintenance areas unless the emissions from the actions conform to the State or tribal implementation plan (SIP/TIP) for the area. Based on air quality data and other information, EPA, states and tribes identify specific areas as not meeting a national ambient air quality standard (NAAQS) and EPA designates those areas as nonattainment. In addition to designating areas as nonattainment, EPA, for some pollutants, also classifies areas based on the severity of the pollution problem. EPA publishes the designations and classifications in 40 CFR Part 81. When the air quality in the nonattainment area improves so that the area is meeting the NAAQS, and the state or tribe develops a plan to maintain the air quality, the area can be re-designated as attainment. These areas are known as maintenance areas. The CAA requires federal agencies to demonstrate that the emissions caused by their actions will not interfere with the plans to attain or maintain the NAAQS in both nonattainment and maintenance areas.

The CAA recognizes that ozone and its precursors can be transported over long distances and can impact large regions. To address that concern, the CAA permits the establishment of Ozone Transport Regions and Commissions to coordinate the control of ozone precursors in the region. Of particular concern is the northeast portion of the United States, from Northern Virginia to New England. At present, EPA has not approved any other ozone transport regions. The General Conformity Regulations recognize the potential need to have consistent pollution control requirements throughout the ozone transport region and thus establish more restrictive de minimis emission levels for the lower classification nonattainment and maintenance areas in ozone transport regions.

In promulgating the General Conformity Regulations, EPA recognized that the many entities of federal government take thousands of actions every day, most of which do not result in significant increases in emissions in nonattainment and maintenance areas. Therefore, EPA promulgated de minimis emissions levels for each of the NAAQS pollutants. If the total direct and indirect emissions from the action are below the de minimis levels, the action is exempt. The de minimis levels are based on an area’s designation and classification and are described in De minimis Table.

In addition to the activities that EPA listed, individual federal agencies are permitted to develop their own list of additional activities that are presumed to conform. The list must meet specific criteria and undergo a public review process. Generally, a federal agency must show that the emissions from that type of action are below the de minimis levels or otherwise will conform with the SIP/TIP. The list can be area specific and does not have to apply to the entire country. An agency taking an action that includes several of these activities is only allowed to claim one activity as a presumed to conform activity. A new provision in the regulations (40 CFR Parts 51 and 93)(27 pp, 287 K, About PDF) allows states to develop a list of activities that are presumed to conform in that state or portion of that state.

Since agencies of the federal government make numerous decisions and take numerous actions every day and very few have the potential to cause significant increased emissions in nonattainment or maintenance areas, EPA’s General Conformity Regulations list a number of categories of actions that are presumed to conform, have insignificant emissions, or have emissions that are not reasonably foreseeable (see Table 2 below). 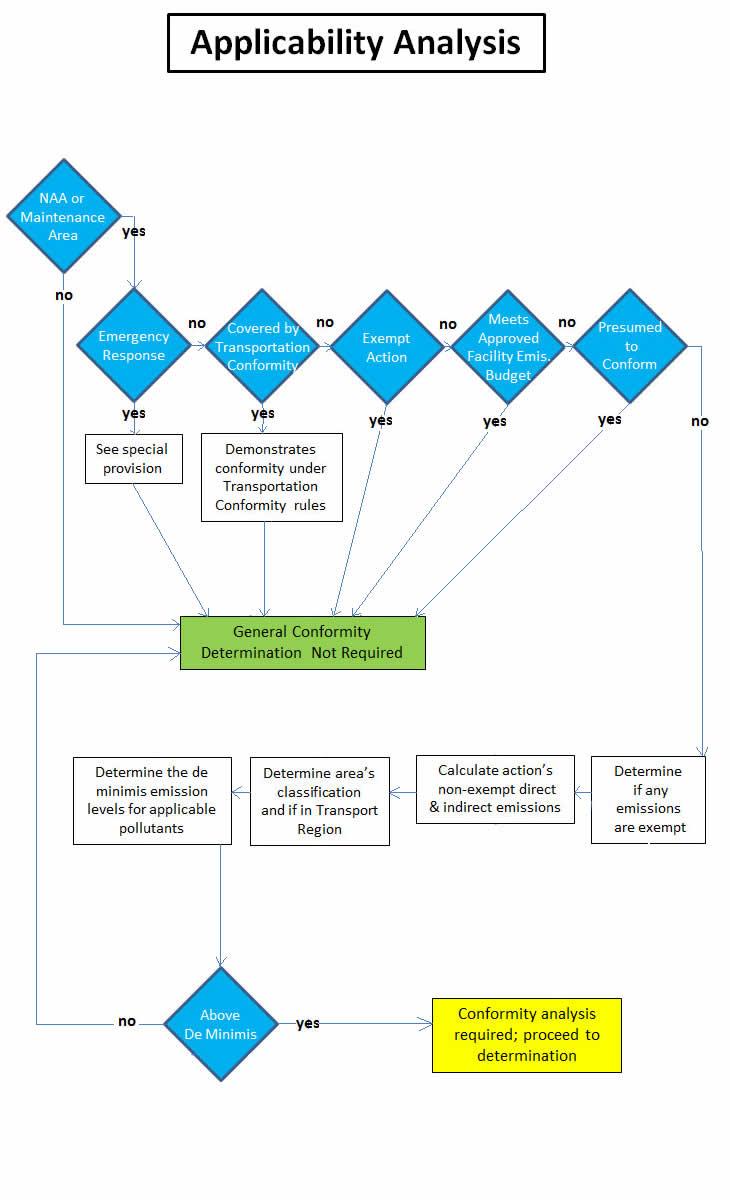