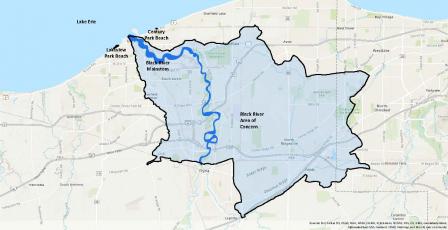 Located west of Cleveland in Northern Ohio, the Black River watershed drains into Lake Erie near the city of Lorain. The Black River was once nicknamed the “river of fish tumors” due to its long history of industrial, agricultural, and urban uses, which led to poor water quality, loss of biodiversity, habitat degradation, and sedimentation. Environmental impacts became severe enough for the river to be designated as an Area of Concern (AOC) in 1987.

Historically, the city of Lorain relied on the river for bringing materials to and from its once prosperous industrial center. The river was used as a mode of commerce and was degraded by discharges from industrial operations and wastewater, which contributed to heavy metal and polynuclear aromatic hydrocarbon (PAH) contamination. Other events that played a role in the river’s impairments include:

Beneficial Use Impairments, or BUIs, are designations given by the International Joint Commission for an AOC. They recognize various examples of significant environmental degradation. As restoration and cleanup projects make progress, monitoring at the site can show recovery in environmental health. If sufficient recovery is reached, BUIs can be designated as “removed.”

The Restrictions on Dredging Activities BUI is projected for removal in 2021. The list below is comprehensive of all BUIs identified at the Black River AOC. In total, three BUIs have been removed from the AOC. Changes in this section to reflect the removal of the Degradation of Aesthetics BUI.

Once Fish Tumors or Other Deformities monitoring results confirm the rates are no higher than non-AOC control sites, this BUI can also be removed. When all BUIs below have been removed, the process of delisting the AOC can begin.

Under a consent decree from U.S. EPA, U.S. Steel dredged 50,000 cubic yards of PAH-contaminated sediment near the company’s coking complex from 1989 to 1990. Since then, EPA and partners have worked to restore the AOC by identifying six habitat restoration management actions. As of 2020, all six of these management actions are complete. Work completed as part of these management actions included installing fish shelves, restoring and constructing wetland, and restoring native streambank vegetation, among other projects. The success of these projects will continue to improve plant and animal populations, help remove BUIs, and contribute to the eventual delisting of the AOC. As the AOC becomes closer to delisting, the city of Lorain and the surrounding area will continue to see ecological benefits of a healthy environment and likely the economic benefits that result from an accessible, healthy waterfront. Because of these efforts, those who live in the area have the potential to see an improved overall quality of life tied to restored local natural resources. 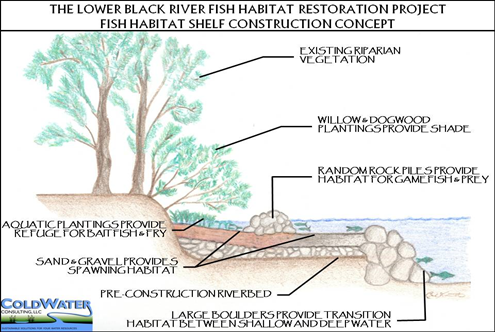 The Great Lakes Restoration Initiative (GLRI) funded three habitat restoration projects to restore Black River stream and upland habitat. These projects benefitted a nearby 300-nest colony of Great Blue Herons, known as a rookery. A steel mill adjacent to the Black River caused environmental degradation and had the potential to impact fish and other wildlife in the Black River. By restoring and removing contaminants from the upland habitat, the projects prevented contamination runoff into the river, and ensured a safe food source for the herons. The projects also restored degraded habitat for fish and other wildlife in the river. Innovative construction techniques and careful attention to nesting windows ensured protection of the herons during construction. 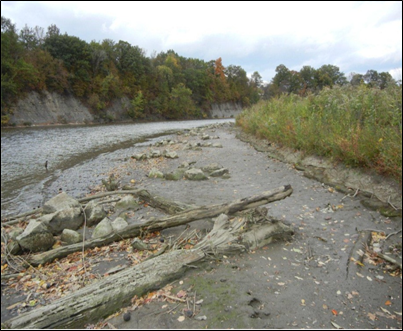 The above projects target the following BUIs: