The Buffalo River Area of Concern (AOC) is located in Western New York in the city of Buffalo . In 1987, the Buffalo River and its surrounding area was designated as an Area of Concern as part of the Great Lakes Water Quality Agreement of 1987.. The river discharges into Lake Erie near the head of the Niagara River in Erie County, New York. The AOC extends from the mouth of the river 6.2 miles upstream to the farthest point at which the backwater condition exists during Lake Erie’s highest monthly average lake level. It also contains the entire 1.4-mile City Ship Canal, located adjacent to the river. A large extent of the Buffalo River and City Ship Canal within the AOC boundary is designated as a federal navigation channel, which is maintained and routinely dredged by the U.S. Army Corps of Engineers (USACE) to a depth of 22 to 23 feet below low water datum.
The area surrounding the river has a history of heavy industrial and municipal activity, which led to large amounts of pollutants entering the river. Beginning in 1825, the Buffalo River served as the western terminus for the Erie Canal. Due to the ease and convenience of transporting goods and supplies through the canal, many industries were built along the river including grain elevators, iron and steel mills, meat processing plants and chemical and oil refineries. Although these industries dominated the area for decades, the 1950s saw a steep decline in manufacturing and transportation business along the river and many factories and mills were abandoned.

Sources of potential pollution that caused impairments include:

Contaminated sediment
• Combined sewer overflows
• Inactive hazardous waste sites
• Other point and non-point discharges
Contaminants in the river and sediments include:
• Polychlorinated biphenyls (PCBs)
• Polycyclic aromatic hydrocarbons (PAHs)
• Heavy metals (lead and mercury)
• Pesticides
• Industrial organics
These contaminants caused fish and wildlife populations to develop reproductive problems, tumors and other deformities. They also led to restrictions on consumption of fish from the AOC. In addition, other water quality concerns include low dissolved oxygen levels, high turbidity and fecal coliform bacterial contamination. Channelization of the river and industrial development hardened the shoreline, decreasing the availability of riparian habitat for fish and wildlife species and increasing municipal runoff into the river. Issues with contamination and habitat degradation  negatively impacted both environmental and recreational uses of the river.

BUIs are designations created by the International Joint Commission (IJC), representing different types of significant environmental degradation. Of 14 possible BUIs identified by the IJC, nine BUIs were identified for the Buffalo River AOC. As cleanup and restoration work is completed, and monitoring demonstrates BUI removal criteria have been met, BUIs can be removed. The removal of Beneficial Use Impairments (BUIs) is a good indication the environment is positively responding to the remediation and restoration work. Two of the nine BUIs have been removed at this AOC. Once all BUIs have been removed, the process of delisting the AOC can begin.

Twenty habitat restoration projects, funded by the GLRI for a total cost of $22 million, were completed in the Buffalo River AOC) in 2019. These projects restored almost 20,000 linear feet of shoreline to a more natural state with gently sloping banks and native aquatic vegetation. Habitat restoration projects for fish populations involved the placement of a variety of in-water fish habitat structures, including porcupine cribs, gravel spawning beds and anchored log poles. The addition of riprap material, loose stone used to form a foundation for a breakwater, and rock vanes along the riverbank were also used to reduce erosion and encourage the deposition of plant beds. Other projects involved bank stabilization, wetland restoration, planting of native terrestrial vegetation, and the removal of invasive species. These projects provide a sanctuary along the river for native wildlife populations in an otherwise urban area.
Since 2011, sediment navigation and environmental remediation projects have remediated more than 1 million cubic yards of contaminated sediment from the lower six miles of the river and City Ship Canal. These remediation projects were conducted at a total cost of approximately $45 million. The removal of sediment from inside, outside and below the authorized federal navigation channel has led to a more navigable river. It ensures future routine maintenance dredging activities do not expose residual contaminants. These projects will decrease harmful toxins and contaminants in the food web, decreasing the prevalence of fish and wildlife tumors, reproductive problems and other deformities.
Remediation and Restoration Projects for the Buffalo River AOC 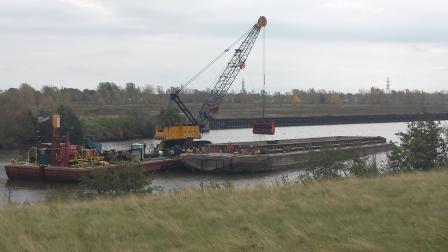 Mechanical dredging in the Buffalo River (Credit: Brian Murphy)Following the U.S. Army Corp of Engineers (USACE) dredging of contaminated sediment from the federal navigation channel, EPA dredged more than 450,000 cubic yards of PCB-, PAH-, and heavy metal-contaminated sediment from select areas within the Buffalo River and City Ship Canal. EPA dredging targeted the side slopes of the river and sediment located below the authorized dredge depth in the navigation channel to reduce exposure to contaminants during future maintenance dredging events. In addition, 65,000 cubic yards of clean capping material was placed over contaminated sediment at the end of the City Ship Canal. This 5-acre capped area is located outside of the navigation channel. This capped area provides the basis for the largest aquatic habitat restoration site for the project. Additionally, plants and habitat structures were also placed under water in the City Ship Canal and at four other locations to revitalize fish and wildlife populations in the river.
Remediation activities took place between 2013 and 2015, and restoration activities took place between 2014 and 2015. Monitoring sediment deposition and surface sediment chemistry took place at two- and five-years post-dredging. Sediment remediation and habitat restoration was funded by EPA and Honeywell and made possible by the collaboration with USACE, Buffalo Niagara Waterkeeper®, and New York State Department of Environmental Conservation.
These projects will help to decrease the prevalence of fish and wildlife reproductive issues, tumors and other deformities. Remediation efforts will also help ease the restrictions on fish and wildlife consumption within the AOC.
For more information on GLLA work in the AOC, see Buffalo New York Department of Conservation's Buffalo River Restoration Project   and Great Lakes Legacy Act Habitat Locations Map (2pp, 1.4 MB, About PDF)Exit

EPA has continually worked with federal, state and local partners to execute remediation and restoration work in the area with the ultimate goal of removing the AOC designation and revitalizing the surrounding communities.

Following the relocation of the Bailey Avenue Bridge, the Thomas Higgins Natural Habitat Park was restored. The park, which is located at the confluence of the Buffalo River and the Cazenovia Creek, is home to many native fish and wildlife populations. Restoration projects included the creation of a seiche wetland and an ephemeral pond, which holds water following snow melt and spring rains but is typically dry during summer months. Additionally, the planting of approximately eight trees, 40 shrubs, and 11,000 wildflowers helped jumpstart healthy habitat for wildlife populations, including turtles and waterfowl.

The Red Jacket Natural Habitat Park provides healthy habitat to fish and wildlife populations within the city. This popular fishing and hiking spot underwent habitat restoration in 2017. Projects included shoreline and near-shore restoration to improve habitat for fish and wildlife species. Green infrastructure near the parking area was enhanced to help mitigate erosion and contaminants from municipal runoff. A living fence consisting of densely growing hedges tight enough to provide edge habitat and prevent the intrusion of invasive species was planted around the perimeter of the park.

The 61 Smith Street habitat area is located on property owned by the Niagara Frontier Transportation Authority and is immediately adjacent to the Red Jacket Natural Habitat Park. The primary goal of this restoration was to increase the amount of healthy habitat areas for fish and wildlife populations. Projects to meet this goal included shoreline and near-shore habitat restoration. In order to preserve the area as a habitat sanctuary and limit recreational use of the area, no additional trails or green infrastructure projects were included.