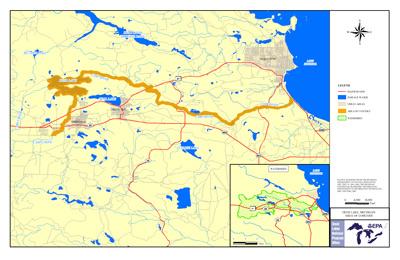 Deer Lake is an approximately 1000-acre impoundment located in central Marquette County near Ishpeming, Michigan. The AOC contains Deer Lake, part of Carp Creek, and the Carp River. Partridge Creek, which flows through the City of Ishpeming, connects with Carp Creek which discharges into the south basin of Deer Lake. The Carp River flows out of the north basin of Deer Lake for about 20 miles, and discharges into Lake Superior near Marquette.

The area surrounding Deer Lake has a rich history in mining. Iron mining occurred in the area from 1848-1967, and gold mining in the late 1800’s. Deer Lake was formed in the early 1880s when the Carp River was impounded to provide water for mining operations in the area. Mine shafts filled up with groundwater after being abandoned. The mine water was contaminated with mercury, which was left over from dynamite residues.

Mercury contamination spread to Deer Lake through several pathways. In the early 1900s, mercury-containing wastewater was discharged into the city’s wastewater treatment system, which ended up in Carp Creek and ultimately Deer Lake. Additionally, in 1970 Partridge Creek, which was directed through the city’s storm sewer, was diverted into a mine pit on the east side of the city to alleviate flooding and storm overflow concerns in downtown Ishpeming. Water flowed to the west through the mine shafts under the City, where wells were used to pump the overflow water into Partridge Creek. This overflow water was contaminated with mercury from the mine, and eventually discharged into Deer Lake. Mercury contamination in the water and sediment of Deer Lake had risen to unsafe levels and significantly impacted the fish community in Deer Lake. These impacts led to fish consumption advisories, eutrophication, and bird and animal deformities in the AOC.

Deer Lake was declared one of 31 Areas of Concern in the United States under the Great Lakes Water Quality Agreement of 1987.

A good indication of interim remediation and restoration work success is the removal of Beneficial Use Impairments (BUIs). BUIs are designations given by the International Joint Commission, representing different types of significant environmental degradation. When Deer Lake was initially designated as an AOC, 3 out of 14 potential BUIs were determined to be impaired. All 3 BUIs have been successfully removed due to cleanup projects and subsequent monitoring efforts that demonstrated sufficient environmental health improvements. The Deer Lake AOC was officially delisted in 2014.The following links exit the site Exit 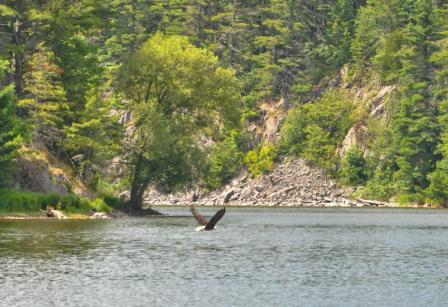 Bald eagle populations have recovered at Deer Lake, where they hadn’t been seen since the 1960’s.Remediation and restoration work in the Deer Lake AOC began in the 1980s and was completed in 2013. An enhanced Secondary Wastewater Treatment Plant replaced the City of Ishpeming’s three Primary Treatment Plants in 1986. Since the city’s wastewater discharges into Deer Lake, this reduced nutrient loading into the Deer Lake AOC by 86%, helping remove the Eutrophication or Undesirable Algae BUI. Additionally, a bottom draw dam, which forces oxygen-rich water at the lake’s surface down to the bottom of the reservoir, was built in Deer Lake in 1987. This helped decrease the ability of residual mercury in the lake’s sediment to negatively impact fish and wildlife populations, as high oxygen levels prevent mercury from methylating into its more bioavailable form. The bottom draw dam helped remove Restrictions on Fish and Wildlife Consumption and Bird or Animal Deformities or Reproduction Problems BUIs. The decrease in contaminated water also helped reestablish successful bald eagle populations at Deer Lake, which hadn’t been seen since the early 1960s. 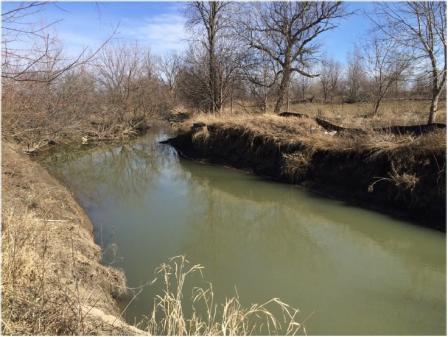 View of the upstream portion of Partridge Creek before the Phase 2 restoration project began.Before the diversion project, Partridge Creek flowed into an underground mine pit on the east side of the City of Ishpeming where it became contaminated with mercury from historic iron mining activities. The water discharged on the west side of the city, where it flowed into Carp Creek and ultimately ended up in Deer Lake, raising mercury concentrations in the ecological system and fish tissues to unsafe levels. The project was completed in two phases and was funded by $8 million from the Great Lakes Restoration Initiative and $700,000 from the City of Ishpeming. 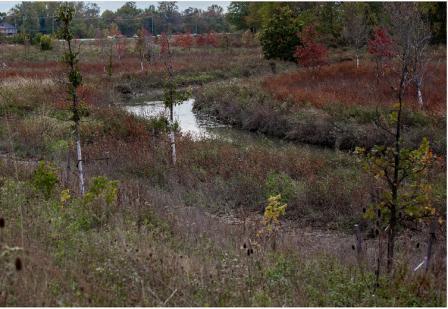 View of the upstream portion of Partridge Creek following successful Phase 2 restoration project.The first phase of the project targeted the upstream portion of the creek, creating 0.5 miles of closed culvert and 0.2 miles of open stream. The second phase targeted the downstream portion of the creek, attempting to restore its naturally meandering stream channel. The design included pools, riffles, meanders and submerged structures to provide increased habitat for brook trout. The result is over 0.5 miles of prime brook trout habitat. It also created 1.3 acres of new wetlands in the restored creek’s floodplain. This project decreased mercury loading into Deer Lake, helping decrease restrictions on fish and wildlife consumption and increase recreational opportunities in the area.