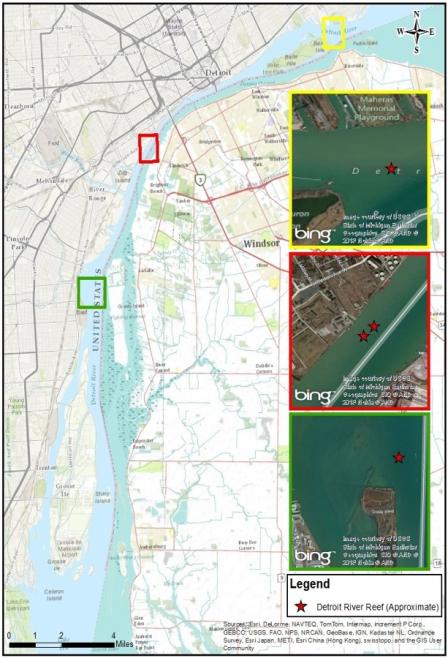 Funding is needed for construction and pre/post monitoring of the Belle Isle and Fort Wayne Reefs, approximately $4 million

The Detroit River has been an important international shipping route since the early 1800s and is one of the busiest navigation channels in the United States. It was also historically one of the most significant sources of recruitment for the diverse Lake Erie fishery, for example, supporting one of the most profitable lake whitefish commercial fisheries in the Great Lakes (Roseman et al., 2007). Since 1874, however, the lower Detroit River has been systematically and extensively modified by the construction of deep-water channels to facilitate commercial shipping traffic. Large-scale dredging, disposal of dredge spoils, and construction of water-level compensating works removed, covered or significantly reduced water flow at natural reefs and historically productive fish spawning grounds. The large diameter, layered, rock-rubble substrate, needed to protect fish eggs from dislodgement and predation, and to fulfill life history requirements of many fish species, exists today in only widely-scattered locations in the Detroit River (USGS unpublished data).

The Loss of Fish and Wildlife Habitat in the Detroit River is a direct result of large-scale dredging activities in the AOC that removed critical spawning habitat for a specific group of fish (lithophilic spawners). Impacts on fish and wildlife populations, also resulted from dredging and other activities that destroyed historic spawning locations.

A total of approximately $4 million is needed for construction and pre/post construction ecological monitoring for two additional fish spawning reefs in the Detroit River AOC.

For the East Belle Isle and Fort Wayne reefs, the planning and permitting phase will conclude in early 2016.  Construction could begin in Summer/Fall of 2016.  However, for construction to begin in 2016, funding must be secured in 2015 in order to begin pre-construction ecological monitoring no later than Fall 2015.

Fish spawning reefs are planned for three locations in the Detroit River Area of Concern:

This reef is fully funded.  Design is complete and permits are being obtained.  Construction is expected in spring 2015.

An early fish spawning reef was installed near Belle Isle in 2004.  This reef was small but has been successful in drawing over a dozen spawning fish species.  A second reef is proposed in the same vicinity, the East Belle Isle reef is proposed to be located about 2,500 feet upstream of the 2004 Belle Isle reef.  This 3-4 acre proposed reef location is in close proximity to a large, documented walleye spawning ground (Manny et al. 2010).

Conditions at this location are predicted to be optimal for fish spawning restoration based on the Bennion-Manny geospatial, hydrodynamic model.  The river bottom is flat, smooth hard-pan clay and water is deep and fast flowing.  Lake sturgeon are known to spawn on coal cinders near Zug Island a mile downstream, and will likely find the new reef site quickly (Caswell et al. 2004).