View a boundary map of the Grand Calument River  AOC 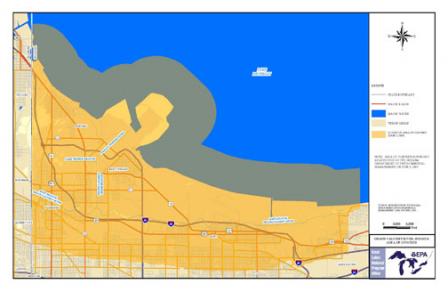 The Grand Calumet River is in one of the most heavily industrialized areas in the United States, flowing mainly through northwestern Indiana. Beginning in the 20th century the area began experiencing an influx of steel mills, foundries, chemical plants, oil refineries, meat packing industries, and pharmaceutical industries. Prior to the 1972 Clean Water Act, industries released industrial waste and some nearby cities discharged untreated sewage into the river. In addition, potential nonpoint sources of contaminants, such as industrial and urban runoff may have affected water quality in the river.

The river was designated as an Area of Concern (AOC) under the Great Lakes Water Quality Agreement of 1987, largely due to legacy pollutants. These pollutants remain in the environment for extended periods of time after they are introduced and were found in sediments at the bottom of the Grand Calumet River, Indiana Harbor and Ship Canal. These legacy pollutants include:

In addition to the legacy pollutants listed above, monitoring revealed degradation in the form of biochemical oxygen demand, meaning the river water had too low a concentration of oxygen for microorganisms to decompose organic matter. The AOC also includes a number of Superfund sites and Resource Conservation and Recovery Act hazardous waste sites.

The Grand Calumet River originates on the east side of Gary, Ind., and is comprised of two east-west flowing branches that cover the southern end of the Indiana Harbor Ship Canal. The eastern branch of the river drains into Lake Michigan. The AOC area, which is 22 square miles in total, encompasses portions of the cities of Gary, East Chicago, Hammond, and Whiting, Ind., and is defined by:

The Grand Calumet River has all 14 Beneficial Use Impairments. Beneficial Use Impairments are designations created by the International Joint Commission that identify some of the most severe examples of environmental degradation. When restoration or cleanup projects begin to make progress, monitoring of the site will eventually show sufficient improvement in environmental health. Once a BUI reaches this point, it can be “removed”, or the beneficial use is restored. So far, two BUIs, Restrictions on Drinking Water Consumption, or Taste and Odor Problems and Added Costs to Agriculture or Industry have been removed. Once the remaining 12 BUIs have been removed, EPA and the state of Indiana can begin the process of delisting.

EPA works with federal, state and local partners to implement remediation and restoration projects in the Grand Calumet River AOC. The overall goal is to remove the river’s designation as an AOC.

Habitat in the AOC had lost functionality due to urbanization and habitat destruction. Four of five habitat projects are currently underway. EPA and partners have implemented habitat restoration projects involving prescribed burns, reestablishing native species, and restoring globally rare dune and swale habitats. To delist this AOC, partners must meet habitat-related BUI removal criteria (PDF). Exit Restoration and cleanup at this AOC will improve one of the most heavily polluted areas in the Great Lakes watershed and allow the surrounding communities to benefit more fully from the river and surrounding ecosystems. 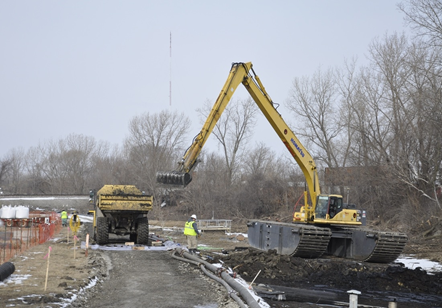 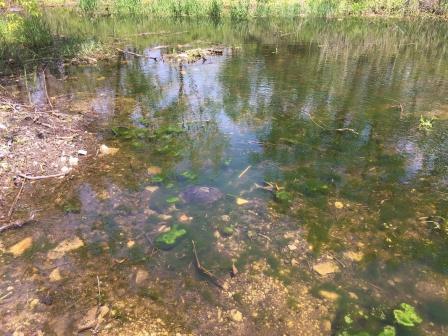 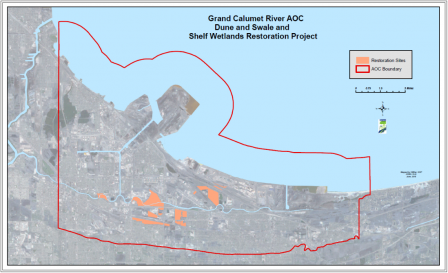 Map of areas within the Grand Calumet River AOC in which the Dune, Swale, and Shelf Wetlands Restoration project was implemented. Credit: Indiana Department of Environmental Management (IDEM).

In partnership with the Indiana Department of Environmental Management, the Indiana Department of Natural Resources, the Nature Conservancy, and the Lake County Parks and Recreation Department, the GLRI-funded Dune and Swale Wetlands Restoration project is restoring dune, swale, and shelf wetland habitat — a globally rare habitat. The habitat is home to many important species such as the Karner blue butterfly, Blanding’s turtle, spotted turtle, and various migratory birds. 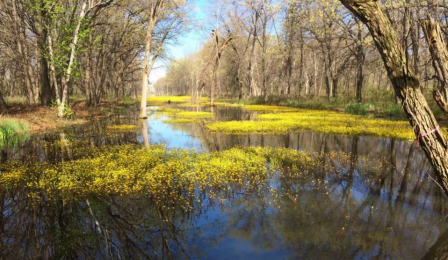 Gibson Woods Nature Preserve in northwest Indiana is part of the Dune, Swale, and Shelf Wetlands Restoration project. Credit: IDEM.The project, which began in 2015, will restore at least 900 acres of state- and locally- managed habitat throughout 15 sites in the Grand Calumet AOC. It is anticipated that this work will be completed by 2021. The project’s main objective is to control dense areas of woody and herbaceous (non-woody) nuisance and invasive plant species such as phragmites. Controlling these invasive species will improve the structure and quality of dune, swale, and shelf wetland habitat and benefit native species, leading to increased fish and wildlife populations in the AOC.

This project addresses the below BUIs:

Other Partners for the Grand Calumet River