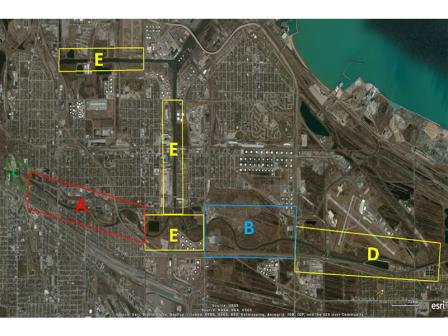 The West Branch cleanup completed in 2012. This zone went through two major remedial projects happening at separate locations in the West Branch.

$78 million dollars has remediated 730,000 cubic yards of contaminated sediment in the West Branch portion of the project. This cleanup successfully removed a large amount of PCBs, PAHs, heavy metals and pesticides from the river.

Zone B - The East Branch

The East Branch restoration and remedial efforts in the Grand Calumet River are in progress.

Remediation and habitat restoration of the 1.8-mile stretch of the river from Cline Avenue to Kennedy Avenue began with the removal of 385,000 cubic yards of contaminated sediments, then capping the dredged sediment. Other remedial efforts include deep pool restoration and the revival of shallow marginal wetlands.

Zone C is located on the West Branch of the river between Hohman Avenue to the Indiana/Illinois state line. Targeted for removal are 11,700 cubic yards of contaminated sediments, then cap placement over an additional 70,000 cubic yards of polluted sediment. The project should begin in summer of 2015 and completed in early 2016.

Work on Zone E has also begun. The final zone is a collection of the remaining Grand Calumet River segments within East Chicago, Indiana. The parts of Grand Calumet River not remediated will undergo a remedial investigation, feasibility study and remedial design, with completion expected in 2015. The project will also address parts of the Indiana Harbor Ship Canal that the U.S.. Army Corps of Engineers does not intend on dredging.

EPA is providing 65 percent of the project costs with funds designated for the Great Lakes Legacy Act.

The State of Indiana is providing the remaining 35 percent of costs for work in Zones A and B using Natural Resources Damage Assessment funds.